Kaitlyn Greenidge: On Her New Novel ‘We Love You, Charlie Freeman’ and Writing Fully Realized Characters

Kaitlyn Greenidge: On Her New Novel ‘We Love You, Charlie Freeman’ and Writing Fully Realized Characters 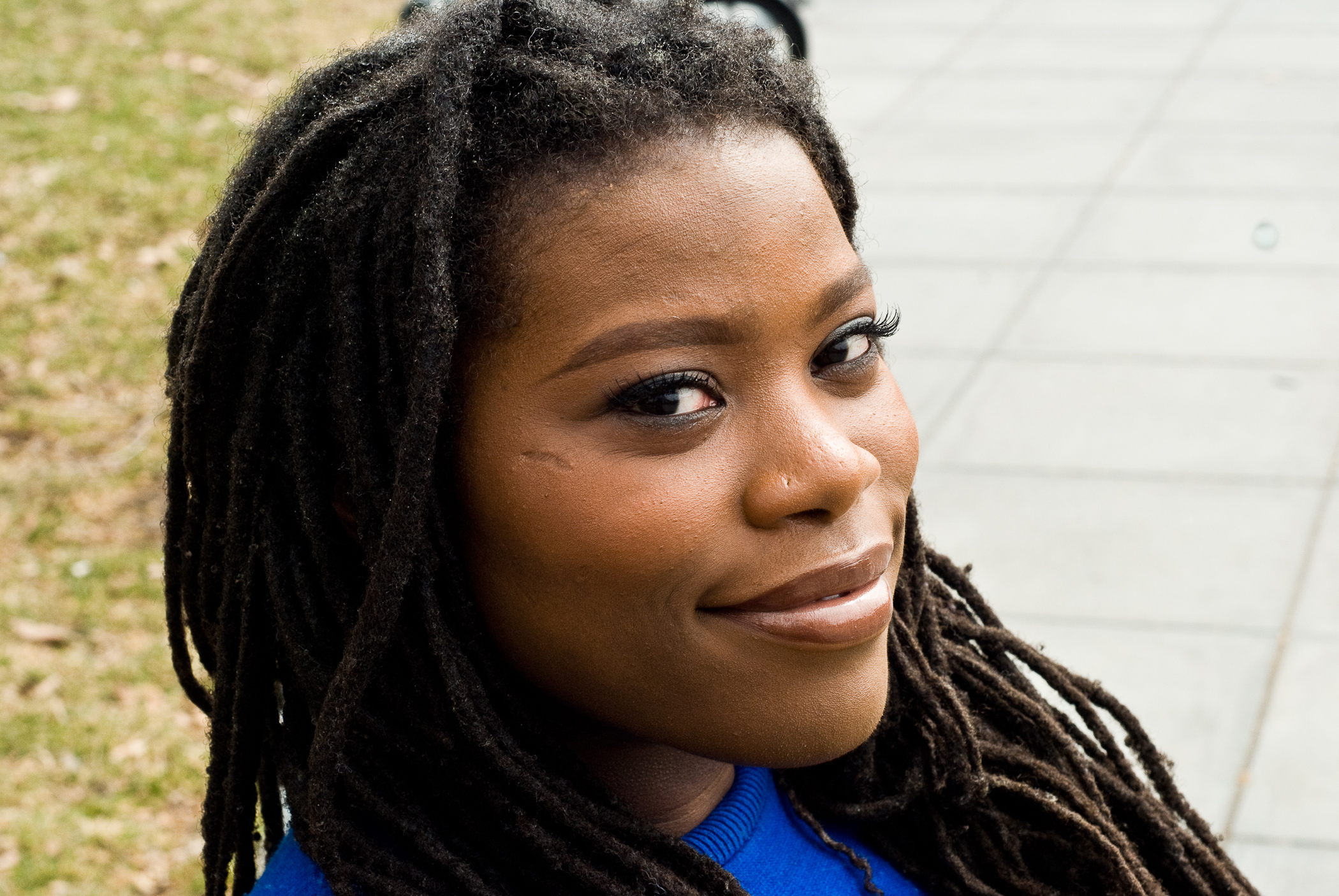 Kaitlyn Greenidge’s We Love You, Charlie Freeman tells the story of the Freemans, a black family hired to teach a Charlie—a chimpanzee—sign language at The Toneybee Institute, a research facility in a predominately white town in the Berkshires. Chosen because the family is fluent in sign language, the Freemans are asked to raise Charlie as own of their own. Intertwined with the Freeman’s story is the tale of Nymphadora, a member of a black secret society, who writes about her strange relationship with a white doctor at The Toneybee Institute in 1929. Charlotte, the Freeman’s teenage daughter, slowly uncovers the upsetting history of The Toneybee, and the Freeman family begins to come undone. This haunting debut begins as a compelling story about uneasy familial relationships, and opens into a provocative exploration of America’s failure to find a language to talk about race.

It took eight years to complete this novel. Can you talk about how writing the book changed your views on the ways systemic social injustice affects people on an individual level?

As I wrote, I began figuring out the motivations for some of the casual cruelties that occur in the novel. At first, I was writing from the emotions of resentment and hurt—from the voice of the young daughters in the novel. But I soon realized that what was a great engine for generating pages made for dreary, unsurprising reading. I had a revelation—it stopped me dead—that each of the characters is operating out of a place of love. And because of the warped world they live in, they can’t do that in a strong, healthy way. That broke the book open for me.

Writers talk a lot about empathy, and I’m a bit distrustful about the way it’s been heroicized. There’s studies about how liberals are allegedly more empathetic than conservatives, etc. I think the potential power of radical empathy is being ignored, reduced to some dumb life hack. This is a good encapsulation of some of the frustrations I’ve had with social justice in the last few years. I am so inspired by the energy and urgency around questions of how we make an equitable world. But I am also made breathless by how quickly those conversations are turned into slogans, talking points, and dogma. Where I see a way forward are movements like “Black Lives Matter.” Even that phrase is such a brilliant piece of writing—so simple, so straightforward, and yet that it is a controversial phrase exposes a fault line in the majority of Americans’ thinking. In the creation of that phrase to name a movement, I see the potential for talk about empathy and how language can promote it. I am both excited by our current historical moment and deeply worried by it.

The book follows two narratives occurring in the same place during different time periods. This choice elegantly illustrates historical and generational trauma. How did this concern influence the structure of the book?

Initially, my understanding of trauma was not as nuanced. And much of the recent research that talks about how memories of trauma pass through generations had yet to be publicized. That research is interesting in that it confirms things we already know about ourselves and our communities. Think of the stereotypes of many marginalized people—that black women are always angry; that Jewish people are neurotic; that Southerners are fatalistic. When you think about it, all those stereotypes are really descriptions of reactions to trauma. I think our culture knows about this phenomenon, but because our culture is deeply fucked, it’s explained through crude, hurtful stereotypes and dark, bleak humor. I tried to focus on the humor part and to elide the stereotypes.

There are hints of the macabre in the book. Some details—like Dr. Paulsen, a doctor at the Toneybee Institute,  compulsively chewing chalk—are truly chilling and creepy. How does horror/the grotesque inform your work?

Ha, you know me too well. I love the grotesque—that’s what I’m naturally drawn to in art and literature. I’m also a dyed-in-the-wool scaredy-cat but I like horror because of its plot mechanics, its telling of a story. But horror is a really interesting genre in that delivering a satisfying ending in horror is very, very difficult. I read We Have Always Lived in the Castle very early in the drafting of this novel. I love that book for its phenomenal first paragraph; the relationship between the two sisters. Sarah Waters writes great horror novels, especially Fingersmith. It has a truly chilling ending, so scary I don’t think I can ever reread that book, even though I loved it.

Charlotte, the protagonist, is queer. What informed your decision to write a queer character, and how do you feel about the popular leftist contention that fiction writers shouldn’t write stories across the power lines of race, gender, class, etc.?

I think anyone can write any experience as long as they recognize that experience as part of the human condition. The problem arises when a writer uses a character’s social positionality as shorthand or for street cred. There’s that really old school E.M. Forster theory of round and flat characters—that it’s okay to have a “flat” character in a book because you will have your “round,” or fully humanized, characters. No one refers to this theory anymore, but I’ve definitely read recently published work that ascribes to it. If you write a character and think “I don’t really have to explore their motivations,” then you have failed that character. Now, in our age of meaningless irony, writers try to get around this by having a character voice their own superfluousness. They’ll have a black character say something like “I’m not your mammy, here to give you sassy advice!” And then the character will do just that. Some people mistake this knowingness for cleverness and freshness and full character development. It is not. At all.

But if you start from the place that this character is a whole person, outside of whatever identity you have assigned them, you are working in the right direction. Charlotte was always queer. She arrived that way, in my imagination. What was important was what her relationships would be like. It was really important for me to give a hint of her future as a queer adult woman, and that that future could contain a nourishing queer love in it.

I am not queer, but most of the writers who influenced me the most were queer. It is crazy to me when I talk to straight writers who haven’t read or don’t care about Collette or Dorothy Allison or even Armistead Maupin.  I don’t really get the block that some readers have about reading a character who is not exactly like them. Like, isn’t that the point of a book?

The novel includes a letter of apology to ‘the African American People’ from a well-intentioned but culturally naïve Julia Toneybee-Leroy. It’s an impressively scathing and nuanced illustration of white liberalism. How did you choose to include her point of view in the novel?

I went back and forth about whether she should be in the novel. I showed it to some readers, both white, and they told me it wasn’t working because it was only sarcastic. She was just a device, and I had to get really uncomfortable in order to understand what her mindset would be. She’s someone who believes she is operating from a place of love, but her concept of what love is when it’s directed at people who are not her social equals—at people she has real power over—is deeply compromised and corrupted. It’s a dark place to write from, so it took a while to get there.

I wasn’t sure if she should be in the novel, in part because it seemed wrong to amplify a white voice like that.

But—part of the morass of solving any sort of inequality is that those in power very rarely hear what they sound like to those who are powerless. Instead we get broad morality plays where the “bad” people have big, villainous speeches. It’s easy to identify that character as “bad.” I’m thinking of that monstrosity The Help. What’s harder is understanding the ways our damaged power structures seep into our ordering of the world and sense of self. People liked The Help because a pretty upper class white Southern girl knew racism was wrong. I wonder if that book would have done as well if that pretty upper class white Southern girl had confronted her own internal biases and assumptions. Of course, we know that readers get very uncomfortable about this. Look the response to Go Set a Watchman. Reviews reduced it to, “Guess what? Atticus Finch was a racist all along!” And people freaked out. But it seems to me that Harper Lee was attempting to do something really brave in that book, to talk about people who make courageous choices, who are committed, in part, to justice, who are still infected with this way of thinking and can’t, or more accurately, won’t, reason their way out of it.