‘How the Boy Might See It’ by Charlie Bondhus

‘How the Boy Might See It’ by Charlie Bondhus 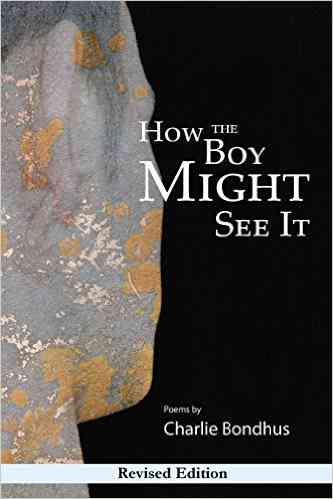 The boy delights in the wonder of budding sexuality—reveling in the carnal: “First, the Corpus and its effects— / a presentation like trumpets in the brain.” He goes on to convey the forbidden, “[N]aked or clothed— / to find his cheek / in a dark room.” Again, “[N]ipples skid across nipples, / heads jerk upwards / and darting tongues collide.”

Enacting sensual pleasure, the flesh also serves as a marker for loss. Suffused with a retrospective haze, these poems also keen—visited by the shades of queer forbears. Before an epithalamium between the dramatic speaker and Whitman, Bondhus cites, “Be not afraid of my body.”

The boy now reconfigures himself as a young man to whom the poet offers advice. In doing so, Bondhus becomes his own father, his voice bending back in time to heal hurts and unfulfilled desires. This journey of remembrance recalls the poems of Cavafy, particularly his sensual “Body, Remember.” Similarly, Bondhus writes, “[W]henever his prepubescent lips / formed their lengthy vowels.” The poet names the world into being. The mouth that speaks, kisses and pleasures the beloved. Flesh becomes a transmitter of communication: “[H]is half-limp / penis twitching on his belly like a question / mark struggling to become an exclamation point.” The locus of memory/language is the body.

As the boy’s peregrination advances, words describe men as architecture, implying solidity and refuge. Stanzas are rooms to be inhabited: “Men’s bodies were like buildings, housing thousands of unknown lives; / until you lived them all, you felt, you’d never know the city.” The use of second person is poignant, for the poem becomes a dialogue between past and present selves. Like the boy-ghost, the poet floats through time, revisiting the metropolis of liberated and thwarted desires, where “[J]oy, is the most / we can hope for.” But it’s a fleeting joy, fraught with danger, “loving without airbags.”

Menace governs this section of the book, seeming to depict the 1980s, a decade of dying and governmental apathy. Raising a defiant fist, the boy becomes every infected gay man, trauma etched into memory’s lesions. A harsher, more sardonic voice asks, “[W]hat rhymes with sarcoma? / We sit, angry men, sharing a meal.” The boy/body transubstantiates itself into sacrifice and Eucharist: “I crushed myself / into a single cup / of wine changed blood.” Poems that celebrated the carnal now mourn its demise.

Without self-pity, the poet walks the edge between Eros and Thanatos, acknowledging their shared contour. As Auden suggests in “The Cultural Presupposition,” awareness of our own mortality gives rise to creativity and a desire to achieve transcendence. Bondhus reiterates this in an inversion:

having transcended the
limitations of the spirit, they
offer themselves to the fleshly world,
skinned saints.

As metaphysical and physical fuse, the speaker develops a wearier voice, communicating through dramatic monologues. In them, he wrestles with the inscrutable paradox of fleshly existence and the poet’s struggle to transcribe the unconscious. Bondhus asks the reader, “How can one seal the love of a man / and a God made man / into verse?” The word has been made flesh.

In another persona poem, Noah speaks, his ache articulating a roar:

My wife is no more—
would that I could have shared
the harvest with her as she lay
face and body deformed
from the fall.

As pitch-perfect as Browning, Bondhus writes in the voice of Jesus, speaking of Joseph’s death:

In the next room, parchment-color light slid
through the cracks in the shutters.
My father’s soul
hung about his fish-cold body
like a half-shed garment.

As the journey tapers, the poet glances back, acknowledging what can never be understood, “[W]here blood will collect / the medical charts which map / the unseen places of the body.” These poems imprint the reader with the invisible, leaving us forever changed by “the heavy business of marking the world.”

The Book of Anna Maps the Emotional Landscape of a Holocaust Survivor
Banned in Richmond: Helen Gurley Brown
Neil Patrick Harris is Writing a Memoir