‘What Belongs to You’ by Garth Greenwell

‘What Belongs to You’ by Garth Greenwell 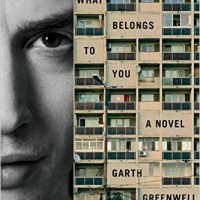 With his debut novel, What Belongs to You, Garth Greenwell works in traditions forged by queer novelists both past and present. Like Proust, and a good deal of Edmund White, Greenwell draws much of his material from his own life. Employing a highly literary style full of labyrinthine sentences and a formal tone, Greenwell recalls Henry James, too. As with all the queer authors mentioned above, Greenwell is concerned with sex and longing, with desire and coupling.

Having said this, perhaps the real import of What Belongs to You is this: it extends its traditions into a very contemporary setting—Bulgaria, one of the many hot spots around the world where LBGT folk suffer—materialistically, spiritually—more than some of their Western counterparts.

And yet, the economically stricken Bulgaria Greenwell portrays still manages to be a place where the stuff of modernity—expensive laptops and costly IPhones—both facilitate and fracture gay life. It is a place, moreover, where the specter of AIDS, STDs and hepatitis hangs over all. The dire situation in Bulgaria can’t be overstated. And Greenwell states it beautifully, stumbling over his high ambitions for himself and his novel only once or twice.

Like the unnamed narrator of What Belongs to You, Garth Greenwell grew up on a farm in the middle of the United States. He studied poetry and expatriates in Bulgaria. He teaches. No one wants to make too much of the autobiographical aspects of any novel, but when the narrator of What Belongs to You states that “The whole bent of my nature is toward confession [emphasis mine],” it adds a level of earnestness and authenticity. The author echoes the narrator; fiction echoes nonfiction.

What does the narrator confess to? To having led a bookish life, one in which he has long struggled with ambivalence and hesitation when it comes to human relations. He also confesses to a “long habit” of sexual compulsion. So when he meets and becomes obsessed with a hustler named Mitko, one of the attractions, besides Mitko’s beauty, is Mitko’s “hypermasculinity,” his “air of criminality,” his “bodily sureness or ease that suggested freedom from doubts and self-gnawing, from any squeamishness about existence.”

Squeamishness is one emotion you won’t find a lot of in What Belongs to You. Self-gnawing, however, is. One of the brave opening scenes takes places in a tea room and while tea rooms may be a disappearing social phenomenon in America, Greenwell evokes tearoom dynamics unflinchingly: “I wanted [Mitko] all to myself, free of the audience we so frequently had, where men would hover outside the stall door or press their ears to its walls, as I had done also when I found myself among the unchosen.”

But when the obsessed narrator does manage to get Mitko back to his place, Mitko spends hours on the narrator’s laptop, navigating “disembodied encounters” with friends and johns. The dejected narrator understands that Mitko is engaging in a kind of de facto “digital” community, one that bridges Bulgaria’s big cities and its small villages. Yet that community is one more thing, besides the narrator and Mitko’s imbalance in desire, education and employment status, that is sure to keep them apart. Actually, on second thought, the digital age and digital communities don’t just keep Mitko and the narrator apart; they keep all of us apart. Greenwell makes his worldview clear when he describes “the symbols and abbreviation of Internet chat” as a “language” much like “a process of decay.”

In this clever narrative structure, everything and everyone is decaying: the narrator is decaying as he struggles with his spiritual life–“I had become one of those men in the dark [on a computer screen] offering whatever was asked for something we wouldn’t be given otherwise”; Mitko is decaying as he struggles with semi-homelessness and alcoholism; and Bulgaria, the world itself, is decaying. It’s only when we come to the narrator’s back story (i.e., his childhood), that Greenwell occasionally engages clichés and sentimental overwriting. In one scene the narrator and his father lie in a field contemplating the stars and the time it takes for a star’s light to reach our eyes—a somewhat clichéd scene from the start. Then, foreshadowing the break between himself and his father, the narrator writes of “orphaned light.”

What Belongs to You is nevertheless a major achievement. And despite all the harsh realism and melancholy with which the novel unfolds, the narrator manages to have one hard-earned characteristic that makes him invulnerable to spiritual decay. He is “out.” When he is thus able to shrug off the threat of being “outed” in Bulgaria, his becomes, at least for me, the hero of the novel. But then, of course, by virtue of his perspicacity, he already was.