The Comics of Dale Lazarov: Illustrated Explorations of Sexual Inventiveness

The Comics of Dale Lazarov: Illustrated Explorations of Sexual Inventiveness 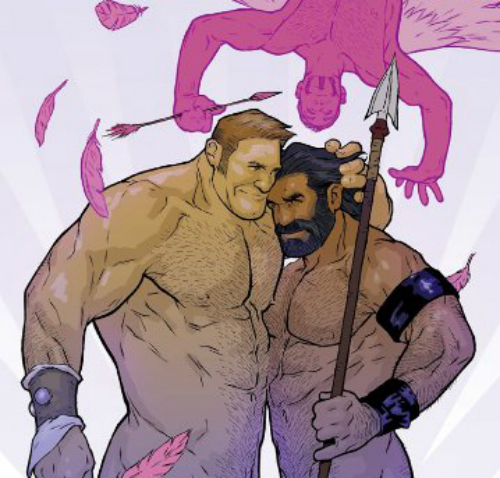 A wordless graphic novel is similar to a silent film, in that the story is told through the characters actions, expressions and small nuances in the comics’ settings, layout and pace. In these productions, Lazarov lists himself as writer, but also sometimes art director, and both his eye for detail and his artists’ talents are what make the sexy proceedings in these comics work.

In Peacock Punks a bearded fellow follows a trio of punks to a bar he’s never visited before. As he explores the nightclub, readers follow a trail of the sparks he ignites in the eyes of the bar’s regulars, taking in his good looks. He soon finds himself surrounded by a ring of admirers offering to light his cigarette. The warm yellow glow cast by the lighters foreshadows a passionate night ahead.

And it’s not just the sex that makes these comics visually attractive. Marotti’s depictions of the dark greens and grays of a rainy night only add to the coziness and comfort these guys find in each other. The sensuality in a drawing of the naked hero standing outside in the elements comes from the rendition of the rain, as much as from the nudity.

After a night of many pleasures, the men return to their day jobs: a teacher, a bookseller, a baseball player, an office worker, a graphic artist.

Lazarov and Michael Broderick team up for Fast Friends, a similar tale of trysts between male couples brought together by bad weather–this time it’s a snowstorm. An especially nice sequence shows two guys, rejected by their lovers, hooking up in a diner. It starts with verbal conversation and a shared cigarette, but readers also take in the body language of come-on glances, knees accidentally-on-purpose bumping up against one another, and butts shifting in their seats for better access. Like Marotti, Broderick’s depiction of weather is as evocative as the erotica. There are plenty of dick, butt and cum shots in these books, but the feeling is congenial, not sleazy or clandestine.

Without the clutter of word bubbles, readers can easily view the sexy bits and use their imaginations to fill in dialog. For readers in search of sex-positive erotica, these amicable gems of sexual inventiveness, wit, and sensitivity fit the bill.

'The Big Book of Bisexual Trials and Errors' by Elizabeth Beier
What are the 'Nepantla' Poets Reading?
Literature at the End of the World