LGBTQ Musicians on Their Favorite Books

LGBTQ Musicians on Their Favorite Books 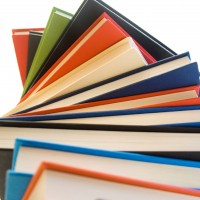 Inspiration can come from the most unlikely places. I’ll bet Ron Chernow never expected his biography of Alexander Hamilton to ever be turned into a hit Broadway musical. And yet here we are.

All art is a filtering of stimuli and influences. Everything from a sentence in a book to the way the rain falls onto the window can create the impetus to create. This week, Lambda Literary is celebrating how literature and music can inspire each other and push each other forward. We asked various LGBT musicians and writers to share their stories. Throughout this week, we will be bringing these stories to you.

Continuing our examination of the relationship between literature and music, Lambda Literary asked several musicians about their favorite books.

Bond is an American cabaret style singer-songwriter whose albums include Kiki and Herb Will Die for You: Live at Carnegie Hall and Silver Wells.

It is very difficult for me to choose one favorite book. As an artist who loves both literature and music as well as the historical context within which music places itself, I am deeply indebted to three books that made me the artist I am.

Please Kill Me: The Uncensored Oral History of Punk by Legs McNeil and Gillian McCain, Intimate Nights: The Golden Age of New York Cabaret by James Gavin, and Lipstick Traces: A Secret History of the Twentieth Century by Greil Marcus are undoubtedly three of the most important books that I have read in my life.

They are beautifully written, fantastic sources of information which gave me insights into worlds I could never have otherwise known as well as a context for myself as an artist, a musician, and as a queer performer. These books allowed me to discover the cultural lineage from which I have emerged—a hidden history, if you will, that I might not have been aware had I not read them

Through these books many examples I was given an understanding of the inherent power to change the world by those of us who are culturally marginalized by mainstream society and how important it is for us to share our histories with one another.

Cakes da Killa is an American rapper whose albums include The Eulogy and Hunger Pangs.

Growing up, I’ve always found it hard to find strong narratives I could relate to. Being black and gay there weren’t many easily accessible age-appropriate books I could get lost in. It wasn’t until I started college that I discovered author E. Lynn Harris. I made it my mission to read every book available. My favorite, his autobiography What Becomes of the Brokenhearted changed my life. It was so refreshing to finally be able to read about the ups and downs of a positive gay figure that was black, complex and vulnerable and not just a stereotypical sitcom sidekick.

Kergil is a YouTube-based singer-songwriter. His album latest album is titled Tell Me a Story.

“The secret of life, though, is to fall seven times and to get up eight times,” wrote Paulo Coelho in The Alchemist. My high school English class was forced to read this book and very few enjoyed it; I read it twice in one day. The message I took away from this book wasn’t something I could articulate in a book report at that age, but I can now: it taught me the power of positive thinking and of discipline. Whenever I reread it, I am reminded of the small steps that add up to the bigger picture, which has shown me that even “failures” have importance, something that has helped me continue to grow as an artist even during difficult times.

Miranda is a singer-songwriter whose albums include Holly Miranda and Magician’s Private Library.

Picking a favorite book is a very difficult thing to do. When I started thinking about this the first thing that came to mind was the book I’ve read the most. A book I’ve carried around the world for years, bought countless copies of, and given them all away. Rainer Maria Rilke’s Letters to a Young Poet, which is a collection of his responses to a young writer who attended the same school Rilke had years later and was writing to get his advice/critique on his own poetry from someone he looked up to. Rilke never once critiques the poems. Instead, this exchange (of which we only see the one side) becomes a handbook, or a bible for me, about what it means to truly listen to one’s inner voice. Rilke instructs the reader to never read his criticism, he says “Nothing touches a work of art so little as words of criticism.” He also speaks on love and solitude, and really understanding who you are as an individual before giving yourself to a relationship. This book is not just for the young or for the artists, it’s for everyone. I’ll leave you with my favorite quote. “Believe in a love that is being stored up for you like an inheritance, and have faith that in this love there is a strength and a blessing so large that you can travel as far as you wish without having to step outside it.”

Punk-rocker Purnell and his band The Younger Lovers recently released the album Sugar in My Pocket.

Okay, so I’ll start by saying that it would be SUUUUUUUCH a fucking lie if I ever claimed to have a “favorite” book, y’know? I tend to be polygamous by nature so the idea of picking one “favorite” book, boy I’ve loved, flavor of ice cream, just seems based in a kind of failure. Now that I’ve cleared that much up, what I can say is my FAVORITE book RIGHT NOW IN THIS SECOND (favorites for me can change from day to day, y’know) that has influenced me a lot is the Flannery O’Connor’s The Complete Stories. I read “Good Country People” in like 7th or 8th grade but didn’t quite get it, but then read it when I was 17 and was floored. When I was younger, I remembered being amazed at the fact of how it’s written so eloquently that you almost don’t notice what a totally fucked up story it is. I got the entire collection of stories sometime when I was 18 and it’s part of the millions of things I read that I love/gets me going. I also love the dynamic of how her work is interpreted. She once said “anything that comes out of the South is going to be called grotesque by the northern reader, unless it is grotesque, in which case it is going to be called realistic.” I.e. interpretation of theme is all context and in the eye of the beholder…is it not? My writing career banks on this much.

Talbot is a singer-song writer. She recently released the album Let It Burn.

I have recently started my journey with the book The Celestine Prophecy. I have learned that it was my dad’s favorite read. I am really at a place in my life now of learning and understanding my own subconscious, energy and higher mind in order to push my own boundaries and understanding my inner workings better.

Since reading this book, marking the beginning of that journey, it has opened my awareness and has really come at a right time. [I am beginning] to get back into writing in order to release new music in the New Year. [The Celestine Prophecy] has changed my career now and moving forward. I am much more at peace with myself and my story and I am really anxious to share that part in this next chapter of my career.

'Dendrophile' by Justin Vivian Bond
'The Ventriloquists' by E.R. Ramzipoor
'Out of the Ordinary: A Life of Gender and Spiritual Transitions' by Michael Dillon / Lobzang Jivaka