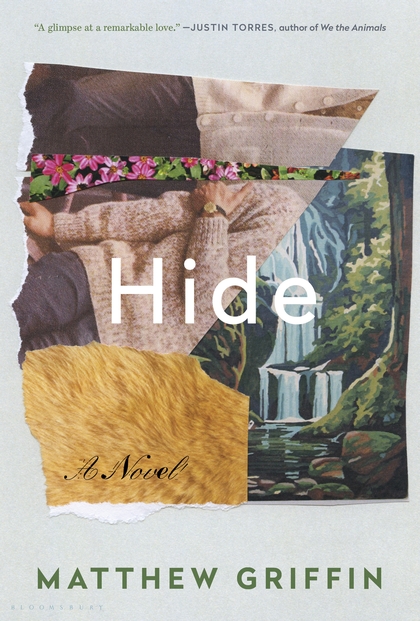 Just before Christmas, I started receiving email notifications, along with tweets and Facebook timeline shares alerting me to an NPR interview between correspondent Ari Shapiro and a remarkable 90-year-old Tennessee man named Hector Black. This was not Black’s first time to be interviewed. In fact, numerous facets of his life–including his involvement in the nascent Civil Rights movement, his lifelong commitment to social justice causes, and his long road to forgiving the murderer of his adopted daughter–had already been chronicled and broadcast on StoryCorps, Radiolab, and The Moth. Shapiro, however, chose to focus on Black’s homosexuality, specifically his coming out at age 70 after years of hiding. As Shapiro noted, “Hector represents thousands of men and women whose names we will never know, a generation of people who were forced to live in secret.”

The two main characters in Matthew Griffin’s debut novel Hide, World War II vet Frank Clifton and taxidermist Wendell Wilson, are also members of this same generation of individuals whose lives were constantly monitored, scrutinized, and very often criminalized because of their same-sex desire. Hide is in many ways extremely claustrophobic, with Wendell and Frank trying desperately to carve out a decades-spanning quasi-marriage while also being literally terrified of being seen together in public. This solitariness suffuses every fiber of their being and threatens to smother them, even as Griffin deftly—if surreptitiously—illustrates the increasingly laissez-faire attitudes toward gays and lesbians from the two men’s rural neighbors and townsfolk.

I will freely admit that Frank’s protracted paranoia about discovery, combined with Wendell’s stridency (which becomes more and more pronounced as the two men age), does not make Hide an easy novel to like. Wendell’s palpable anger, frustration, and desperation are on full display throughout most of the novel, acting in concert with Frank’s slow, inevitable mental and physical decline. Hide opens in the present day, in fact, after Frank has just “taken a spell” in the garden, leaving Wendell to call the paramedics (a serious breach of Frank’s efforts to remain clandestine) and to accompany Frank to the hospital (which entails answering embarrassing personal questions about their relationship)

Wendell is used to these types of negotiations, conversational gambits, and furtive interactions, though Griffin makes abundantly clear that they have exhausted him mentally and spiritually. Wendell’s only solace, it seems, is through his memories of when he and Frank were younger, and he is plainly terrified of watching Frank literally slip away from him. Near the novel’s conclusion, Frank’s evident dementia subsides and provides Wendell a rare opportunity to share with him a moment of clarity. In response to Wendell’s query, “Do you ever wish that you could have done things different?” Frank responds with a heartbreakingly honest confession: “I wish I’d—I know I wasn’t always as good to you as I should’ve been. I know I could be difficult. But I was just so scared. All the time…. That they’d take you away from me.”
Make no mistake. Hide is an exceedingly tough and emotionally wrenching book. Griffin’s writing is, however, simply beautiful. Indeed, I find a lot of similarities between Hide and early works by fellow Southern writers Jim Grimsley and Dorothy Allison, two writers I admire immensely and have written about extensively. Griffin, like Grimsley, hails from North Carolina, and honed his writing chops at the prestigious Iowa Writer’s Workshop. He currently serves as Visiting Assistant Professor at the University of Louisiana at Lafayette. Hide is Griffin’s first novel, but I feel certain that it will not be his last.

‘Heart Stop’ by Radclyffe
Aaron Hartzler: Waiting for the Rapture
'LGBTQ Fiction and Poetry from Appalachia' Edited by by Jeff Mann and Julia Watts

Nathan G. Tipton earned his Ph.D. in Southern Textual Studies at The University of Memphis in August 2013, and is a longtime contributor to Lambda Literary Review.