‘Heiresses of Russ 2015’ Edited by Jean Roberta and Steve Berman

‘Heiresses of Russ 2015’ Edited by Jean Roberta and Steve Berman 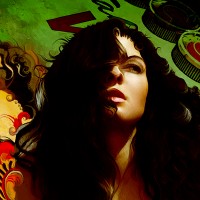 If, like me, you’ve never heard of Joanna Russ (though she’s one of sci-fi’s most influential women writers), Jean Roberta’s mention of the late feminist writer in her introduction to Heiresses of Russ 2015 will send you to Wikipedia, where you’ll find Russ’s piercing, ethereal gaze staring at you from the right side of the page. Read on and you’ll discover that Russ began publishing science fiction novels (Picnic on Paradise; The Female Man) and short stories in the 1960s, and over the course of her career was an outspoken critic of male dominance in the science fiction world. In addition to her award-winning fiction, she was a scholar of the science fiction genre; she was posthumously honored by the Science Fiction and Fantasy Writers of America with a Solstice Award and was named to the Science Fiction and Fantasy Hall of Fame in 2013. In addition to her speculative fiction work, she wrote extensively on pornography and sexuality, and she was an out lesbian.

And thus, from this distinguished woman, Lethe Press’s Heiresses of Russ 2015 (the fifth in the series) takes its name and intention. Edited by Jean Roberta and Steve Berman, Heiresses of Russ 2015 anthologizes the year’s best lesbian speculative fiction—eighteen stories featuring diverse worlds and characters, the common denominator being the “woman + woman” formula (which, as Jean Roberta notes in her introduction “can mean various types of connection” and indeed, the featured stories do not adhere to one version of what lesbianism looks like). Ranging from alternative histories to reexamined myths, reimagined fairy tales to futuristic societies and space exploration, Heiresses of Russ 2015 runs the gamut of imagination.

And what visionary imaginations these authors possess. Otherworldly, winged half-human creatures populate the exquisite agony of being a teenage outsider in Melissa Moorer’s “Made Light” and the lusty fantasies of a technical artist in Vivien Jackson’s “Game Fae.” Native American animal-centric mythology of the hunter and the hunted earn a modern retelling in Nicola Griffith’s brooding “Cold Wind” and the infamous Greek sea monsters Scylla and Charybdis reveal their true natures in B R Sanders’ “Real Monsters.”

Hard science fiction is usually (and rightfully) accused of being a (white) man’s world, but here Seanan McGuire’s terrifying and all-too-possible “Spores” depicts a multicultural lesbian family caught in a science lab’s fatal mistake; Shannon Connor Winward’s “Ghost-Writer” weaves genetic recoding of the human brain with the tapestry of a broken lesbian marriage; and Annabeth Leong’s “Repair Mission” gets two lady space-travelers hot and bothered in the artificial atmosphere of a spaceship carrying alien life-forms.

Speculative fiction is a broad genre, and some of the stories included in Heiresses of Russ 2015 defy categorization, which seems appropriate. “Sarah’s Child” by Susan Jane Bigelow turns a seemingly contemporary world into an alternative one when the transwoman narrator comes into contact with the woman she might have been had she been born biologically female. Bonnie Jo Stufflebeam’s “Skeletons” draws a delicate world in which humans (in this case, a complicated group of twenty-somethings on a camping trip) are confronted at every turn with the specters of extinction.

As is not often enough the case with anthologies, there isn’t a bad story in this bunch. Jean Roberta and Steve Berman have done a marvelous job selecting and curating these wise and splendid tales. The prominent role of women-loving-women and the breadth of vision captured in these worlds are at once inspiring and enlightening. In Heiresses of Russ 2015, the non-mainstream dynamic of woman + woman becomes not only accepted and integrated but a source of real power. Joanna Russ would be proud.