The Lush and the Spare: A Review of Richie Hofmann’s ‘Second Empire’

The Lush and the Spare: A Review of Richie Hofmann’s ‘Second Empire’ 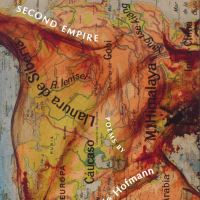 Like the architecture of the same name, Richie Hofmann’s Second Empire is a stately and elegant volume, nuanced in intention and artful in execution. To enter this book is to step inside a grand hall, where silence and utterance combine in their power. This is to say that these are poems of high ceilings, exquisite caesuras, spacious arrangements of language on the page. Nothing busy here, nothing rushed or crowded. There is room, in fact, to luxuriate in the interstices Hofmann creates, to savor each occurrence and artifact. See, here:

the heavy bees, clumsy in their flight, humming
__against the bricks and orange tree blossoms.

I watched the ships

of the Roman people

The four sections of Second Empire stand like pillars, providing a strong, symmetrical integrity for the collection at large. The poems within these sections move by paradox: bright flourish and delicate nuance, an interleaving of the lush and the spare. For each section, I chose a heart poem that seemed to capture something essential about Hofmann’s style.

In the first, consider “Egyptian Bowl with Figs.” This is an ekphrastic poem that turns immediately sensuous as the speaker leaps from description to speculation:

In the Egyptian gallery: dried fruit left in a bowl,
as if time and beetles and a dead king
had chewed around them,

The reader, too, feels “fig flesh” between their teeth.

At the end of the poem, an epiphany: The speaker anticipates how his own reckoning with love and loss might be perceived by those who have lived longer, loved longer, lost more: “But I am young./My hair is the color of antique coins. No one I’ve loved/ has died. How can I know or say what hunger is?”

This question is adamant, seeking an answer, but also rhetorical, accepting no answer is possible. We keep reading because we can’t know or say for sure what hunger is either. Who can? These poems provide a parlor and a sanctuary, even an altar. We are invited inside them to contemplate the questions that they raise.

In the second section, the poem “Description” distinguishes itself as ars poetica in my reading. This is such a scopophilic “one who relishes deeply the act of looking” speaker who addresses drinking in with the eyes and then again with the whole body. Hence, his love affair with ekphrasis. Hence, these lines:


Once a poet told me, Your eyes are whores.
Once description was all I thought I needed
to bridge things. And snow shawled the branches.
[…] And snow feathered the grass
which was mine to remember and forget.

To make art of what is seen–that is mimesis, yes? To attempt to document the world, to approximate it on the page? Once description was all I thought I needed/ to bridge things. And who describes more incisively than Hofmann? He even shows us, immediately after this statement: And snow shawled the branches. To make of “shawl” a verb. To make us see and feel simultaneously the snow wrapped around the tree’s arms. This is evidence of a finely honed skill. And yet, the speaker reckons, there is a need to go beyond description, to go beyond even memory (which was mine to remember and forget) in the making of art.

Hofmann seems to raise the velvet ropes at the fulcrum of his collection. We have been touring the world through his speaker’s eyes, and now he is taking us into the cordoned-off rooms, the more vulnerable places. We keep reading because we want to know what will bridge things, and what the things are to be bridged: Art and life? Mind and body? Love and loss? All of the above?

In the third section, the title poem appears, already marked with heightened significance by its name, “Second Empire.” Hofmann seems to have been writing his way toward this poem throughout the first half of the book, arriving now at an articulation of identity–the speaker as body in water, as white in black–the self, inevitably, juxtaposed.

I am a little white omnivore

in the black water,
inhaling avidly
the absence of shame.

This poem takes us to a prelapsarian moment. The setting is not a garden, but a pool, or perhaps an ocean. There are two here, an “I” and a “you.” Together, a “we.” We lie on our backs/ with our underwear on. These bodies are covered. In this version, no shame—not yet. Then, one of the book’s most provocative insights:

The soul is an aristocrat.

It disdains the body,
staring through the water
at the suggestion of our human forms.

I love how the declaration about the soul becomes its own island on the page. The soul is isolated. The soul separates from the body so as to regard it (perhaps also to condemn it) with another pair of eyes. The soul is elite. The soul feels superior to the rest of the self. Perhaps the soul knows the shame the body has yet to learn. Perhaps the soul knows the hunger that feeds both love and loss. We keep reading because we want to cross the bridge between the island of soul and the mainland of body. We keep reading because we trust this poet can build it.

In the final section, the penultimate poem manifests what its first line describes—When the sun broke up the thunderheads. See those clouds on the horizon, portending a storm? This poem, “After,” calls them out. This poem pushes through them with relentless illumination. It is the coming-out poem in my reading, elegant on its own terms but also allegorical.

Notice the way the sun is coming out of the clouds, asserting its hot light. Then, listen to the speaker as he says:

_the world was at once foreign
and known to me. That was shame
leaving the body. I had lived my life
from small relief to small relief, like a boy pulling a thorn
from his foot.

Post-lapsarian we might call this moment. We have seen the speaker in what we may presume was childhood or early adolescence. Shame had not yet entered his body. Now, the shame has left. In my interpretation, this poem explains how it is to re-enter the world after you have named yourself honestly for who you are and for whom you love. What is it like to live in the closet? Well, it is very much like living from small relief to small relief, a series of secret longings and unnamed encounters. It is to live behind the thunderheads where no sun can reach you. What does it feel like? Well, very much like a boy pulling a thorn from his foot.

And now the thorn of silence, of secrecy, is gone. Shame has been renounced as truth has been embraced. There is so much promise here in the tender lines that follow, images of rebirth:

_________Wet and glistening,
twisting toward light, everything seemed
recognizable again: a pheasant lazily dragging
his plume; the cherries dark and shining
on the trellis; moths hovering cotton-like
over an empty bowl

The speaker is describing again, relishing the world. It hasn’t disappeared after all. It hasn’t been taken from him. And yet, more than description is needed to bridge things here. Hofmann elevates description to allegory. It is at least in part a queer allegory, but a multi-valent one as well. The poem encompasses many readings, many ways of knowing. Here’s how it ends.

The speaker sees himself among the pheasant and cherries and moths. It is an ecstatic seeing, stepping outside the self to gain a fuller vantage: “even myself,/where I reclined against an orange wall,/hopeful and indifferent, like an inscription on a door.”

I read the hope here as the possibility of belonging, of not being isolated and set apart. I read the indifference here as a queer necessity—to be able to say, “This is who I am; take me or leave me.” Perhaps this is what is chiseled on the door.

Second Empire is a stunning debut. Richie Hofmann is a master architect. These poems are precise as blue prints. They show us worlds within rooms, the universal and the intimate paratactic on each page. We keep reading to the end of the book, then look around for the next portal, the next door. It is there waiting, in the final line, already ajar: “could marry    for love.”

Camp Combines Romance & Musical Theater for a Thrilling Summer Read
Finding and Fostering Empathy Online with 'IRL' by Chris Stedman
‘They May Not Mean To, But They Do’ by Cathleen Schine