‘The Family Tooth’ by Ellis Avery

‘The Family Tooth’ by Ellis Avery 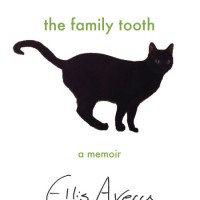 Ellis Avery calls The Family Tooth a “zine” as a “tribute to the raw, inspiring confessional, messy experiments in feminist self-publishing.” ‘Zines, short for magazines, are handmade, short books; primarily made by women, ‘zines share stories about life, struggle, triumphs, and defeats. Often ‘zines circulate among a coterie of friends and comrades. Mimeographed or photocopied ‘zines usually include some handwritten elements and visual raw material. ‘Zines had a zenith in the 1990s, but women writers and artists have used this type of handmade publishing and coterie circulation for generations. Emily Dickinson’s fascicles, Djuna Barnes’s The Ladies Almanack, Judy Grahn’s Edward the Dyke, and dozens of other publications can be described with similar terms. As Avery notes, ‘zine is also an apt description of her new memoir, The Family Tooth.

Although Avery’s The Family Tooth is more polished than most ‘zines—perfect-bound with a glossy cover, blurbs from prominent writers, careful typesetting, free from errors—the spirit of The Family Tooth and feminist ‘zines are the same. ‘Zines contain the truth about an individual woman’s life, usually the author, written in her own voice and with her own pictures and illustrations. Similarly, The Family Tooth gathers fifteen essays into three parts. through the gathered essays, Avery explores the loss of her mother, illness, and health. These essays are sublimely crafted, urgent in their telling, and, in the true spirit of feminism and activism, insightful and incite-ful.

One of the strategies Avery uses to great success in the collection is synecdoche, the device where one item comes to stand in for a whole—often for a particular human emotion. In “The Cello Courier,” for example, Avery recounts how, after her mother’s death, she moves her sister’s cello from her mother’s house in Florida to her aunt’s house in Long Island, New York. Her sister, living in Harare, Zimbabwe, decided that she could not give up the cello despite the challenges of getting it to Africa; she wanted to keep it. She could not immediately transport it across the ocean, so the cello needed to be moved to New York until her next visit. Moving a cello is not an easy process; they are large, bulky, and inflexible. Through Avery’s closely observed narrative, which renders both the physical worlds as well as the emotional worlds of her characters—Avery herself, her sister, and her mother—the cello becomes a symbol for how Avery negotiates her mother’s death and her appreciations of her mother after her death. At the end of the essay, Avery reflects “on how many of us it took to look after this one instrument, something my mother had done for years without a second thought.”

Cellos, cats, a tooth, a sapphire, and dozens of other objects achieve symbolic meanings in Avery’s essays. Objects are one means through which Avery comes to understand the people, relationships, and situations in her life. Literary aesthetics are another. Avery consistently transforms her close attention to the world into literary art; through the structure of these essays, her artful deployment of literary techniques, and her extraordinarily well-crafted sentences. Consider this sentence from Avery’s essay, “What She Left:” “Like many daughters, the old woman I’m most afraid of turning into is my mother, so it was eerie to find myself calling her forth with the pained gestures I remember her making as well: a careful tilting of the neck, a slow ceaseless seeking of ease.” Through simile, Avery connects herself with her mother and with daughters everywhere, describing the exact physicality that unites her with her mother as well as evoking her own resistance. And she does it beautifully. Here and throughout these essays, Avery transforms closely observed moments into sublime revelations, meaningful beyond her experience, resonant for many.

The Family Tooth is both a woman-centric text and a deeply feminist book in its content and its method of thinking. From Avery’s accounts of the loss of her mother to her own grappling with health issues and the choices she makes to respond to medical issues, feminist thinking about health and wellness are at the center. The revolutionary aspects of the feminist health movement, including its influence on collective responses to AIDS and gay and lesbian health, are written deeply into the lives of hundreds of thousands of women. The Family Tooth embodies the marks of the movement on our lives. Avery describes the “Glad Rags,” unbleached cotton, reusable menstrual pads, she used as a young woman, a remnant of the women’s health movement and its desire to unhinge our bodies from corporate, medical control. Her own odyssey of researching and understanding her illness, challenging doctors and treatment plans, questioning received wisdom, experimenting with food to treat her diseases are all informed by generations of analysis and activism by feminists. Seeing the direct influence of the feminist health movement in Avery’s text is a powerful reminder of the success of feminism. While some components of the feminist health movement struggle today (for example, see recent reports of the struggle of the Boston Women’s Health Collective to find funding for its work), the influence of the movement and its complete transformation of how we understand and seek health information and health care continues to be evident in women’s everyday lives. This observation is not to suggest The Family Tooth is only a political book about feminism and sickness—or health. That aspect of Avery’s memoir is only one; the book is so rich and dense that it cannot be distilled singly.

The Family Tooth is about mothers, illness, sisters, health, lovers, and healing. The Family Tooth is a collection of essays closely observed and artfully rendered; it is a creative non-fiction story that covers a period of sickness and death in one woman’s life; it is both personal narrative and medical narrative. It is achingly beautiful and wickedly funny. Incidents and experiences that made young women angry and drove them to create their own ‘zines are present in The Family Tooth, but this collection features the words—and art—of mature woman, of a writer at a pinnacle of her craft. While Avery cannot control the situations of her life, she renders them beautifully in The Family Tooth. This paradox is what ultimately makes Avery’s art so compelling: the transformation of moments, data, and information into carefully rendered stories, united by control of timing, observations, and literary technique. In The Family Tooth, Avery affirms how art, combined with politics, transforms our lives.