‘Murder Under the Bridge’ by Kate Jessica Raphael

‘Murder Under the Bridge’ by Kate Jessica Raphael 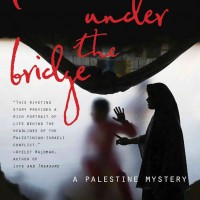 Much important social change has been launched by writers who educated their readers while telling a damn good story. James Baldwin, in Go Tell It on the Mountain, highlighted the hypocritical treatment of gay people in the black Christian community—and opened a vital conversation that continues today. He built on an honored tradition: Charles Dickens used Nicholas Nickleby and Oliver Twist to spur massive reforms of the British school-workhouse system. Upton Sinclair’s The Jungle supercharged U.S. labors and triggered a storm of changes in the meat-packing industry. Both Dickens and Sinclair built on the foundation established by Elizabeth Gaskell in her 1854 pro-labor novel North and South.

When I first subscribed to Kate Raphael’s blog twelve years ago, I sometimes joined other readers in posting the comment: “Please write a book!” Ms. Raphael, a Bay Area writer and gay-rights activist, spent each autumn back then in the West Bank, assisting in the olive harvest. She wrote about and photographed what she saw in her work with organizations including Jews for a Free Palestine—families working their groves while Israeli tanks blocked access to water and transportation routes, activists clamoring for media attention to the farmers’ struggles, students and professional people managing their daily lives in a hostile environment. As the seasons passed, her readers came to recognize village and family names. We were disturbed by the confiscation of Raphael’s camera and shocked over her sudden arrest on a vague charge related to refusal to submit to a search of her purse. We later worried after each of her subsequent arrests on increasingly serious charges, and finally her deportation after a nine-month sojourn.

I had seen televised images of houses being bulldozed and olive groves being uprooted, and remember feeling stunned in 2004 when The Economist printed a photo of a freshly erected section of the 25-foot-tall concrete “fence” being constructed by the Israeli government, dividing towns and separating farming families from their ancestral groves and fields. It was this image that led me to Kate Raphael’s writing in the first place.

Raphael’s blogs revealed a phenomenon that in some ways disturbed me even more than the dramatic news images, because she was so accustomed to it that she mentioned it almost in passing: the daily “checkpoints,” with their built-in humiliation and aggravation. A 19-year-old soldier with acne and an Uzi arbitrarily announces that no men over age 25 will pass through today’s roadblock—meaning that a number of people, including teachers, doctors, even police officers, pull out their mobile phones and explain to someone that they won’t be coming to work. Clearly these were not extraordinary events, and in Raphael’s telling, the local people shrugged their way through—managing, for the most part, to keep their resentment well concealed.

Raphael wrote clearly and professionally, and although from year to year she grew increasingly passionate about her observations, she maintained her wry humor. Like other readers, I expected to buy, within a few years, copies of a slim volume of her essays. A great holiday gift for like-minded colleagues!

Imagine my disappointment several months ago when I learned that Kate Raphael would soon be releasing her first book—a murder mystery. I am not a regular reader of mysteries, and I began reading a galley of Murder Under the Bridge expecting to find that the author had compromised in some way. The book quickly pulled me up short. I was chastened and became enthralled with one of the book’s central characters, a Palestinian detective—the only woman on the force, who navigates through the political and military upheaval brought about by the occupation while also dealing with the routine sexist barriers and condescension familiar to all women in male-dominated professions.

At a recent event in San Francisco, Kate Raphael shared, while  explaining her love of mysteries: “I learned everything I know about the Navajo Nation from Tony Hillerman.” In Murder Under the Bridge, she tells the world some of what she knows about Palestine, entwined with a complex murder mystery, a chaotic police procedural, and a juicy clandestine lesbian romance.

Kate Raphael speaks touchingly of her childhood devotion to Israel. The Jewish National Fund has long sponsored a “plant a tree in Israel” campaign, to which Raphael and countless other Jewish kids in the U.S. donated money out of their lawn-mowing and babysitting revenues. She has spent her adult life coming to terms with what has been done with the money so innocently donated, and the billions in military aid provided by U.S. taxpayers. She comments ruefully on the irony of “planted trees” that can never replace the uprooted olive groves.

The book offers no stereotyped heroes or villains, and advocates no simple solutions. It throws the reader into the middle of a notoriously intractable political and military conflict. In spite of ourselves, we stay up late hoping that Benny the Israeli police captain will turn out to be the good guy he claims to be. We curse when a boy confesses to a crime we want to believe he could not have committed, and cheer when a hard-bitten Palestinian official lies to his Israeli overseer in order to protect the policewoman who has earned his respect and trust.

Murder Under the Bridge picks up where John Le Carré, another genre-bending author, left off with The Little Drummer Girl, his damn good story embedded in an account of the Palestinian-Israeli conflict.

Kate Raphael is in good company. And so are her fans.