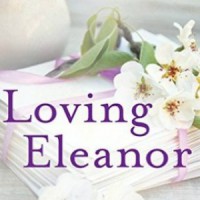 Loving Eleanor by Susan Wittig Albert is written as the memoir of Lorena Hickok, renowned journalist and intimate friend of Eleanor Roosevelt. Although this is a fictional work, I never once lost the feeling that I was actually reading a memoir. Throughout, I felt very close to the story and close to “Hick’s” perceptions as she tells of her difficult relationship with Mrs. R or Madam, as she calls Eleanor in the beginning of their relationship. This is undoubtedly due to the extensive research that Albert has done, but it is also due to the tone, which is set from the very beginning; it is the tone a woman seeking to understand a major experience in her life.

Hick is portrayed as a somewhat out lesbian, although lesbian was not a word that was generally used in polite company back then. I say that Hick is seen as ‘somewhat out’ meaning she was out as much as she could be in a world that had no concept of ‘out.’ Albert does an excellent job at portraying this rather nameless something that went on between two women who were attracted to each other.

Of course, any story of Eleanor and Hick brings up the question, “Well, does this author think they did ‘it’ or not?” However, this is not the question that this novel grapples with. This author has deeper issues to explore.

At the core Albert’s story is not the question of whether Eleanor and Hick were physical with each other or not. Albert doesn’t ask this question because she takes it for granted that they were. A quiet natural passion arises between the two women, which over time evolves into a deep platonic friendship and later even appears to cool as Hick becomes involved with other women.

The real questions for Albert and for Hick are what happens when you fall in love with another person and that person changes from an individual into a personage? And what if you were the one who was instrumental in creating that personage, but now you want the real person back?

The story of Eleanor and Hick begins with their initial meeting in 1928. Franklin has just been elected governor of New York when Hick interviews Mrs. R for the first time. Mrs. R tells Hick “[W]hile I am very glad for my husband, I’m not terribly thrilled about this election—for myself…” Mrs. R fears that taking on the necessary duties of the first lady of New York will mean putting aside her own projects, such as her teaching in an exclusive girls’ school. “I love teaching… [I]t’s my life.“

The understanding that Hick gives to Mrs. R and the encouragement to carry on with her own projects begins the strong bond between these two women. Ironically though, Mrs. R’s attempts to develop schedules that allow her to proceed with her own work while simultaneously attending to her husband’s needs also becomes one of the factors in ultimately driving the two women apart.

This same reluctance to be the woman behind the man continues to deepen once FDR is elected to his first term as President. Mrs. R tells Hick, “I don’t do[…] anything of consequence… When Franklin goes to the White House[…] I will put on a gown and white gloves and stand in a receiving line and smile and say frivolous things to silly people.”

Hick convinces Eleanor to make something out of her position. She suggests she have press conferences that are only for women reporters. This is a huge success. Later, Hick goes to work for The Federal Emergency Relief Administration, and observes the Great Depression close up. Hick’s descriptions of poverty in West Virginia are staggering; I don’t think I have ever felt poverty as strongly as I did when reading Albert’s depiction. It is not hard to feel the urgency that Hick experiences when she wants something to be done and the government is moving too slowly. So, of course, she contacts her friend, Eleanor Roosevelt.

The more Mrs. R. gets accustomed to making her position her own, the further down the road she moves toward personage until finally Hick realizes that the individual Mrs. R. she once knew is barely there any more. When Hick sees that she has become last on Mrs. R’s to-do list she makes her exit. Not completely from E.R’s life. They remain friends, but Hick has to establish a separate life for herself.

But as time goes by Hick wonders if, when E.R is no longer First Lady, there be a place for her. No, she decides. Eleanor has become a personage. “Too many now loved her—and she them—to allow herself to love and be loved by one.”