Jack Fritscher: On Editing ‘Drummer’ Magazine in the 1970s

Jack Fritscher: On Editing ‘Drummer’ Magazine in the 1970s 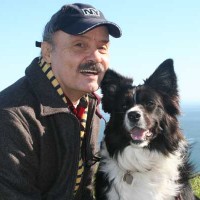 In the 1970s, editor and writer Jack Fritscher offered solace to masculine identified gay men around the country within the pages of the San Francisco based magazine, Drummer. His aim was to inform and empower the closeted readers to exit the solitude of their leather fantasies and seek real life encounters with other men. It was a publication that liberated generations to come by offering an image that they could finally identify with.

“There was leather culture in San Francisco for years and years,” says Fritscher, “but it really grew exponentially as leather folk from around the country sought sexual refugee immigrant status from the creeping fundamentalism that was pulling off these Anita Bryant anti-gay bills.” With this mass migration of men was an influx of radical sexual behavior imported from all over the country. Fritscher frequented the bars and baths to observe the regional behavior and keep an eye out for new trends that others haven’t thought of, which he included in the magazine.

As a teenager, the young Fritscher had searched for a refuge of his own to give context to his sexual identity. “At eighteen in 1957, I began coming out in magazine shops and bookstores in Chicago and Greenwich Village, camouflaging my emerging queerness via the more acceptable pop-culture labels of ‘Beatniks’ and ‘Hippies,’” he says.

Like many youth of the time, he rebelled against the strict conformity of the 50s. In 1958, he dyed his hair red, bought a book on yoga, and walked around Greenwich Village looking for the Beatniks. “I found them, I became one, and I was happy, which is one of the reasons why I couldn’t wait to get to San Francisco in 1961 when I had my first chance.”

One of Fritscher’s many inspirations was Malcolm Boyd, a radical Beatnik priest who read poetry to packed coffee houses. Boyd was named one of the 100 most important young men and women in the United States by Life magazine in 1962. Having become a Catholic seminary student himself, Frischer was excited to see his vocations as writer and priest come together.

From Catholic seminary to San Francisco, Fritscher continued the search for an image to identify with. There was then yet another cultural shift: “The Beats of North Beach begat the Hippies of the Haight who begat Folsom Street and its cultural ‘roots’ magazine of record, Drummer.”

Having gone through various iterations, Drummer’s first issue was in June 20th, 1975 in Los Angeles. The following year, publisher John Embry fled to San Francisco after the L.A.P.D. busted the Drummer Slave Auction for practicing “slavery.” Friend and founding San Francisco art director, Al Shapiro, introduced Embry to Fritscher. “Embry had arrived knowing no one in the City, and we two seemed to know everyone from the bars, baths, and bruncheries,” says Fritscher. It was a no brainer—he was hired in March 1977, and mostly wrote issues 18 to 33. 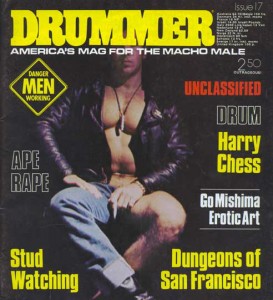 “[Drummer] was kind of an instruction manual on how you might maneuver your own ‘homomasculine’ identity in a world of straight people who didn’t believe there were masculine gay men,” explains Fritscher. “Drummer was a magazine of gender, stating, identifying and defending masculine identity by masculine identified homosexuals who nobody expected to come out of the closest because nobody knew they existed.”

Fritscher and Shapiro pulled the L.A. panties off Drummer, as he puts it, and pulled up its San Francisco leather pants. In the process, they successfully transformed Drummer from a bar rag into a leather magazine for national and international consumption, helping to create the very leather culture that it reported on.

“I tried to catch that lightning in a jar in Drummer,” he says as he reminisces about the city’s leather-sex scene. “It really was wild; it was beyond anything any of us had experienced.”

They knew it couldn’t last forever though, figuring they’d either outgrow it or they’d grow old but it was the AIDS plague that finally slammed the window shut on that unique time and place.

“We were trying to get over being the best little boys in the world,” says Fritscher. The collection of writers that were the Drummer salon were sexual soldiers, inspiring the curious and closeted with their “war tales” that were printed in the pages of the magazine. They were doing what the majority of people were too terrified to do, just like true radicals would. And it all happened in 1970s San Francisco—an era lost.

'Rough Trade' and 'A Sticky End'
Lexie Bean on the Power of Writing Letters to Your Body
Spotlight on New Queer Literature: A Conversation with GlitterShip