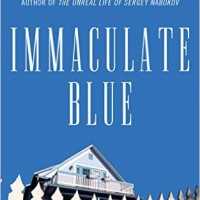 There’s a postcard I sent to a friend once, which reads: “The past, the present, and the future walked into a bar. It was tense.” If karma is a boomerang, nostalgia is a noose. The urge to look back, revisit the past, to try to relive or unravel it, is often the dangerous realm of unfinished business. Paul Russell’s startling and incisive new novel, Immaculate Blue, brings back Anatole, Lydia, Chris, and Leigh–the four characters he introduced in his first novel, The Salt Point, as they come together almost 30 years later to exhume remnants of their past with each other.

The convocation takes place over preparations for the wedding of Anatole to his future husband, Rafa. The setting is once again Poughkeepsie, New York, the place where all four of the friendships began, changed, and survived, though not un-scarred. They each loved someone who didn’t love them back, or who did but couldn’t say it, or were loved and then left abruptly. And now each of them are still trying to understand the constancy with which love is never what you expect; that perhaps it only drops down from the immaculate blue. And what better place than the packed arena of a wedding for trusts to falter, revelations to be had, or old wounds to reopen. Russell has the insight and instinct to use with precision the gathering’s convolutions, eroticism, and just-under-the-surface heat in which all the characters come together in a potent, surprising, and also humorous night.

The young and beautiful Leigh was the great catalyst in their early lives; the single being that would change each of them, as Anatole muses:

A boy came between us. Can we even remember his name? But of course we can. At the time he seemed as auspicious as a wounded angel fallen out of Heaven. Our Boy of the Mall, Anatole christened him. How vividly he remembers that first glimpse, one September afternoon on the pedestrian mall, Leigh on a bench eating an ice cream bar. He wore jeans, a white t-shirt, loafers without socks. His profile was perfect.

When we last saw him in The Salt Point, Anatole, laughing through his tears, broken by love but filled with it too, drunkenly jumps up and down repeatedly answering back his complaining downstairs neighbor’s voice: “I’m just trying to stay alive up here! Don’t you understand? I’m just trying to stay alive!” And that too, is what everyone is still trying to do as the new novel’s prismatic sense of reconnaissance meets the surgical precision with which each of the friends conduct various autopsies of each other’s hearts and actions. But it is that very need to live, to go forward to the future in whatever capacity and shape they have now found it. That is the real testament to what was so important as they look behind them. The road ahead is always in the rear-view mirror.

As the novel opens, the years of music by Bronski Beat and Jimmy Somerville have given way to Lady Gaga; trickle-down economics have done their damage in Poughkeepsie and elsewhere, with occasional hamlets of wealth. Irony and caution are the better barometers of all states of affairs. Anatole is still working at Reflexions, which he has made a successful business, still coloring and cutting the hair of his “republican wives” heads. Lydia, now married and with a son–the deaf, beautiful, perceptive, and young musician Caleb–enjoys the mundane though happy constructs of being a wife and mother; she has earned her hetero-normalcy by never giving up her individuality. Chris, invited by Anatole in the second it takes nostalgia to hit the ‘send’ button too quickly, is now a private contractor for oil-controlled, covert military operations in Port Harcourt, in Nigeria. He’s seen his gore. He watched “. . . two soldiers–eighteen or nineteen–handsome as all get out, kids bored and scared and very far from home,” videotaping a lip-synch to Lady Gaga’s “Telephone.” Three days later, “the prettier of the two,” steps on an IED, blowing off his legs and genitals. And Leigh? Our Boy of the Mall? Leigh is still the mystery of the novel; the one in the back of everyone’s mind, and in the front of all of their suddenly reawakened attention to the past. Immaculate Blue is really Chris’s story. Like the eponymous music store of the book’s title, it is he who is the center now of everyone’s questions, musings, and observations; where visitors gather to peruse his collection of thoughts. Chris is defined by observation: watching and being watched, whether with the boys he hires to have sex in front of him, or the beautiful young Caleb and Elian at the wedding reception, Chris is the constant eye; holding his cards close but always on the lookout for fire, for the sound of guns–that thing the Nigerians name “scatter,”  to mean the complete ruin of all things. He always needs a way out. His chapters, which Russell titles “Night Music,” are startling codas to the other chapters. In them, Chris reveals the past–his own great mistake in love that predicated the result of all his future interactions. As he ponders, upon finally at last meeting up with Leigh–no longer Our Boy of the Mall, or the It Boy, “Is it possible to be aroused by nostalgia alone?”

As the progression of the wedding nears its penultimate revelations, the characters spend time with each other in a variety of settings. Each of them grasps a chance to know something, or to get information from someone else, or to be told a secret. They parse out old loves, pay homage to wrong moves and recalcitrant affections. Because they are all looking at the past, they often cannot reconcile the faces and actions with the people they’ve now become. What once seemed so close in each other–the cognizance of the known thing that mattered, even if it was pain–is something they can’t help but revisit. They can’t change the past; they can only look at it with new eyes.

Paul Russell’s innate knowledge of these characters is so much of what makes the novel compelling. Immaculate Blue can be read alone, and it suffers no missing pieces. Yet, read as a sequel, it contains the dimensional depth of a family album: the history there, as people look at themselves, at a moment in time, when they were on their way to becoming someone else. Russell populates the story with some extraordinary smaller characters–all of whom, in even the smallest context, lend the book a progressive drama, color, and superb narrative.

The main characters come to their final acceptances: Lydia and Anatole have joined the ranks of the wed. Chris and Leigh, however, are still the outsiders. There is an extraordinary final meeting between Leigh and Chris, in which questions of who loved whom, and why or why not, are set to be answered as they ineluctably veer toward the events of the past. But answers are nowhere to be found. Sex is still an option. But it will be the one thing that brings everything to ruin. Chris, able to outmaneuver his present, in sex or liquor, cannot outmaneuver the past–“. . . sorrows of a certain kind have always been an aphrodisiac.” He looks with a slanted eye at everything and realizes how, among everything that has moved forward, he’s still locked into his running. Russell shows us with such depth, the essential human emotion that has taken all of the friends to their current state of the heart: years and distance hold few things intact. One cannot ask the past to reveal anything, it can only offer up its shards. You can’t ask, “Did you love me?” without the risk of hearing the answer. With Immaculate Blue, Paul Russell brings to a close four memorable friendships that loved deeply enough to always risk its often faltering arrows–they still risk it as a means of trying to stay alive. It reminds us once again why he is one of our best gay novelists exploring the nature of the heart and its resting places.

'My Sweet Wild Dance' by Mikaya Heart
When Theaters Go Dark, Read Plays
In an Era of Fake News, Fiction May Save Us