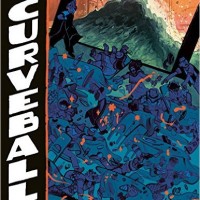 With Curveball, Jeremy Sorese sweeps us into a Jetsons-style future in order to explore the very human experiences of heartbreak and friendship. The graphic novel is a stroll through the life of a person dealing with the struggles of connecting with the people around them. The book follows Avery, a waiter on a cruise ship for t wealthy citizens. Avery is never going to win employee of the month, but Avery’s relationships with their coworkers and their roommate/best friend Jacqueline show them to be a genuine and caring, if a little too soft hearted.

Avery’s emotional story deals with their off-again-on-again, one-sided, mess of a relationship with sailor Christophe. Since Christophe’s deployment, Avery has had some much needed time to heal; but Christophe’s return rattles Avery out of their self confidence. Avery’s sense of stability is shaken; the novel is partly an exploration of how Avery seeks to regain a sense of self amidst romantic turmoil.

Avery’s world too exists in a facade of stability. All of the futuristic technologies which characterize Sorese’s world run on kinetic energy, movement and noise driving each machine. Occasionally, this energy builds up into an unstable and dangerous  frenzy (defined as a “snap” in the book’s futuristic lingo), which causes a breakdown of all technology in the vicinity. Clean up from these disasters is routine, so citizens pay the disasters no mind. No one sees these disasters for what they are: symptoms, warning signs for a much larger concern. Treating the symptom leaves the true trouble just waiting to bubble up. 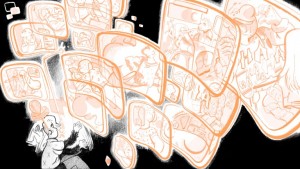 The technological snaps mirror Avery’s own emotional upheavals. Everyone is under the impression that things are just fine, things are under control. The symptoms are treated, not questioning if there is more underneath the surface which is being ignored. Problems are easy to push aside; out of sight, out of mind so to speak. Yet when Christophe appears or a snap occurs, everyone is forced to look at what they have been denying, if only for a moment.

The rise of the graphic novel has opened great avenues for storytelling, especially for queer stories. Graphic novels are not bound by language in the same way that prose novels are. Case in point, I made it through half of the book before I realized that Avery is not identified by a specific male or female gender. Avery’s gender is tricky to pin down, landing solidly somewhere in the middle, a fact which slides past the reader in an illustrated format. Throughout the novel, gender and sexuality flow as non-issues, serving only to increase the expansiveness of the landscape.

The art itself conveys more than just the queerness of the story. Sorese masterfully immerses the reader in the story from the first moment. Incredibly human stories exist in a world full of robots and fantastic beasts. Curveball is long–420 pages long. Which is especially lengthy considering it’s a graphic novel. But it is cinematic in its scope; blasting through battles and sharing the intimacy of crying alone in the rain. The story is heartbreaking, but heartbreaking in the “how great is humanity” kind of way; the kind of heartbreak that leaves you in love with the world.