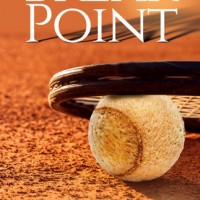 When we enter the Break Point story, World War II is in full throttle but the Americans have not yet entered the fight, and we quickly discover that the two main characters already have a history. Meike von Bismarck, from an aristocratic Germanic family, is famous for her number one world ranking as an amateur tennis player. Helen Wheeler is an American who struggles just to survive on the amateur tennis circuit. She’s ranked number two and would like nothing more than to finally topple Meike from the top spot. However, tennis and life prove a conundrum for Helen, who would also like to win back the affections of her former lover and resume their couple status. Von Bismark, though, has told Helen she is too much of a distraction and has ended their relationship. In reality, Meike is in deep trouble, trying to juggle her personal values without giving in to Hitler’s demands.

Helen has her own set of problems. Although she is the top seed in the United States, she has a tumultuous relationship with her fans because of her on-court temper and her flamboyant social life. Helen’s chance to turn professional will help her finances, but Federal Agent Paul Lanier has other plans for Helen. When the FBI agent holds out pictures of Helen and Meike that could embarrass them both, Helen knows he has her by the proverbial racquet strings, and she must yield to stipulations to spy on Meike to keep the photos from becoming public. But Helen also sees a brighter side to the situation,  because when she makes contact with Meike again, she intends to prove to her that they are meant to be together, once and for all. Thus begins the odyssey that could unite both women in love, but could also bring darkness and evil right to their doorstep.

Finally meeting during an Australia tournament, the psychological and sexual tensions between Meike and Helen are obvious, as is the questions about their relationship and their futures. As Helen tries to prove whether or not Meike has compromised her personal beliefs and knuckled under to the Nazis, she walks a fine line, trying to win Meike back at the same time.

Wallace has written an excellent plot with purposeful, often tension-filled scenes. The world in which both women live is aptly described to hold the reader’s attention and imagination, with dramatic scenes guaranteed to keep pages turning. The two main characters are true to their personalities throughout, with Meike, the principled, serious, almost a Xena-like warrior, and Helen, who initially appears somewhat flighty, but shows her true mettle when the chips are down. The harsh realities of war and the things that must be endured are skillfully portrayed as the women rush to help a friend whose life is in jeopardy. All the while, the obvious sexual attraction between them is cause for another kind of tension altogether.

Secondary characters enhance the story, from Leisle, Meike’s doubles partner who remains an unknown till the very end of the story, to bad-guy Nazi, Oskar Henkle who never wavers from trying to bring Meike down. Enigmatic FBI Agent Lanier remains mysterious almost till the end, and Swifty Anderson, Helen’s friend and agent, struggles to keep her on the straight and narrow, often resorting to widening the path for her instead.

Dialogue is well written and moves the story along, often informing us of the character’s histories and of subplots, without distracting us. The author gives us insights into both main characters within their respective scenes with internal musings that don’t slow the plot down.

Break Point is a heart wrenching story set at the height of WWII with a refreshing perspective—of Germans who do not endorse of the actions of Hitler and his henchmen and of an American being manipulated by an FBI agent for government purposes. This is countered with the love story of two people, who might be destined to find completion together, but first, they must overcome obstacles that sometimes seem impossible—a compelling tale of history and compassion, destiny and enduring love.

‘A Certain Loneliness’ by Sandra Gail Lambert
Chana Wilson: The Power and Fury of the Past
‘The Perfect Family’ by Kathryn Shay