‘All We Lack’ by Sandra Moran

‘All We Lack’ by Sandra Moran 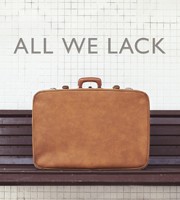 “Oh, sometimes it is as if desire itself had been given form, and acreage, and I’d been left for lost there” –Carl Phillips

It is easy to walk around the world insularly. To exist in the multiple narratives of confluence, without being jarred away. A million magical things happen a day, I read recently, in my horoscope, but we aren’t paying enough attention to notice them.

And this–the paying attention, the jarring awake–is where the crux of Sandra Moran’s novel All We Lack lives. Following a group of (unknowingly) connected strangers, the novel is structured through a series of point-of-view perspectives. Much like William Faulkner’s As I Lay Dying, each character has different chapters in the same time and space as the other characters, so that the reader is jolted from perspective to perspective while the characters remain blissfully unaware.

The connective thread? A bus crash. The book begins with a bus crash that introduces the readers to a vivid cast of characters and then (subtly and deftly) illustrates their inner consciousnesses. It reframes the entire, fragmented novel through a structured lens, because we the readers know we have a bus crash to get back to.

With rich characters and movable landscapes (Moran was spot on in capturing the stop-start of a long, cross-country bus trip), this novel is a must read. As I closed the book after the last page, I was left wondering about my own insularity, my own unconsciousness. Who was walking around me now, how was I connected to them, and how would we ever notice one another?

'From the Closet to the Courtroom: Five LGBT Rights Lawsuits That Have Changed Our Nation' by Carlos...
'The Albino Album' by Chavisa Woods
'The Song of Achilles' by Madeline Miller