‘What We Left Behind’ by Robin Talley

‘What We Left Behind’ by Robin Talley 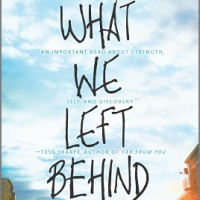 Toni and Gretchen have been in the sort of instant love-at-first-sight that only happens in fairy tales. They met across a crowded high school dance floor and were a couple before the song ended. They’re  the model that all their friends aspire to. They have the future mapped out, until suddenly they don’t. They’ve been a model lesbian couple for all of high school, but gradually their relationship has privately evolved to be more reflective of T’s genderqueer identity. Toni isn’t out to anyone, but college offers a new opportunity to build a more supportive community. The plan is that they’ll both go to school in Boston. Toni will attend Harvard and Gretchen will go to Boston University. That is until Gretchen gets into NYU, a school Toni didn’t even know she applied to. This causes a rift that neither partner seems willing to talk about, but they’re determined to make the distance work.

What We Left Behind is told in shifting first person perspective, jumping around in the timeline of Gretchen and Toni’s relationship, and measured by time together and time apart. The writing is very, very good. Talley knows how to let a story unravel organically and how to build well rounded, diverse characters. Toni gets involved with a group of mostly transmasculine friends on campus and jumps into their new social circle and academic environment full throttle. Gretchen acclimates a little slower, mostly hanging out with her new gay best friend Carroll.

There were times when I hated both of these characters, which is a mark of achievement on the author’s part. While dealing with identity stuff is hard, Toni is often self-absorbed and distant. As Toni is dealing with their gender issues, Gretchen becomes more and more of a doormat, putting her partner’s needs first at the expense of herself. But really, what early relationships aren’t sort of like that? Codependency is something lots of people, and maybe especially lots of younger queer couples, grow out of as we get better at balancing our needs with clear communication and mutual respect. Those things don’t happen in a vacuum–they’re often the product of trial and error. Even in their least likeable moments I was rooting for Toni and Gretchen, if not to make it work, to at least exit the relationship on good terms.

There’s a near absence of gender variant representation in YA lit, so I was pretty excited to get this book. Talley gets a lot of things right (chief among which is the navel gazing that goes along with finding a comfortable place in the spectrum of identity politics so common in your late teens). I think that people who identify as nonbinary might feel a little slighted by T’s eventual decision to transition. It is true that some people who do eventually identify as trans go through a period of association with the gender variant community. That’s legit. But I feel like the resolution of this book might make straight people assume that genderqueer is a stopover to transitioning, which delegitimizes a really hard fought recognition. That said, T’s conversations with their friends about gender and sexuality were interesting and informative, if a little preachy at times.

The most realistic, well-written part of the book for me was Gretchen’s evolution. In the beginning, she is a young woman wrapped up in a pretty intense first love. She’s a supportive partner to Toni and well-liked among their friend group. The tough choice to go to NYU gives Gretchen the ability to spread her wings and find and identity of her own outside of her relationship with Toni. We watch her grow as a feminist and as a person, and in the end, both characters are people you’d be proud to know and like if they were walking around outside the pages of this impressive novel.