‘The Wedding Heard ’Round the World: America’s First Gay Marriage’ by Michael McConnell with Jack Baker

‘The Wedding Heard ’Round the World: America’s First Gay Marriage’ by Michael McConnell with Jack Baker 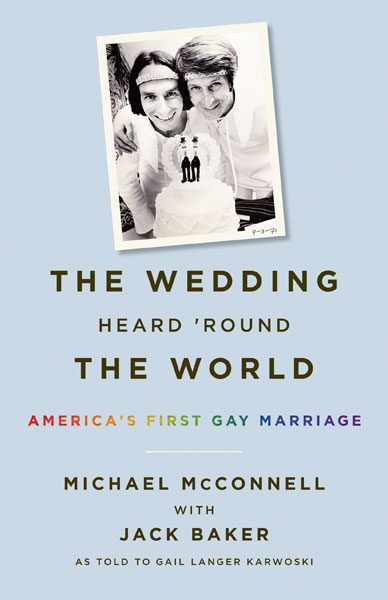 June 26, 2015 marked the historic moment when the United States Supreme Court ruled in favor of same-sex marriage. A new generation of LGBTIQ Americans will simply take the legalization of same-sex marriages for granted; many LGBTIQ Americans already believe that their fight for civil rights ends with this ruling. This is why learning our history is so important—and it’s nice to learn history from an individual’s story captured in a slender book. This is why Michael McConnell and Jack Baker–the first known gay couple in the United States to apply for a marriage license—wanted their story preserved forever in The Wedding Heard ‘Round the World: America’s First Gay Marriage.

Sit in a comfy couch when you read this book. Michael McConnell’s easy, personable tone will make you feel like your uncle, father, or grandfather is telling the story of their younger years, and what queer life was like back in the day. His persona alone makes this book an instant classic; to this day most adult books about same-sex marriage—or LGBTIQ history for that matter–are dry, academic tomes or cautionary tales, with a focus on the young. We have living LGBTIQ elders who made and experienced history; their stories tell us how things really happened. McConnell fills in those blanks between the lines of history books and Wikipedia’s entry on the legalization of same-sex marriage.

By telling his story, McConnell puts some myths to rest. While Minnesota would like to claim McConnell and Baker as “theirs”, this gay couple originally hailed from Norman, Oklahoma, where they first met at a University of Oklahoma Halloween barn party “for gay guys” on October 29, 1966 and had an encounter that few novelists could describe sweeter or gentler. Back then, when most gay men had no positive role models for long term relationships, McConnell already had an idea about the type of men he admired and would like to marry. Yes, in 1966, McConnell—a gay man—had no doubt that he would marry the man of his dreams. And McConnell, after a breakup with another man that left him broken hearted for some time, eventually found that man in Jack Baker, who reminded him of the engineering students who he looked up to as a boy.

McConnell had two Oklahoman parents who supported him 100% as a gay man. While Jack Baker was arrested at another University of Oklahoma gay party during a raid, and could have lost his job when the police contacted his employer, the customer relations manager protected him. Indeed, this gay couple lived a charmed life in Oklahoma. The police raid on that party, however, is what led McConnell and Baker down a fierce path. McConnell reminisces:

I’m sure the police never intended to turn us into crusaders or activists by raiding a harmless dance, but that was one of the lasting effects of that evening. The raid demonstrated to us the pointless, hateful persecution of gay men by police and authorities…We always joke that Jack—being part Irish—has the legendary luck of his ancestors. But truthfully, we realize that it’s more about our attitude than luck: neither of us has ever caved in to bullies, not to the cops or anybody else. We were both determined to be ourselves in spite of harassment, and that’s exactly what we have done. After the All Saints Bust, we knew that someday we would find a way to stand united with other gay men and women and demand to be treated with respect and dignity.

Soon after the arrest, Baker’s honorable discharge from the Air Force became a general discharge. McConnell, a librarian, helped Baker research the rules and regulations behind these decisions, but Baker decided it best to apply to law school in order to fight for LGBTIQ civil rights in the courts. Baker chose the University of Minnesota over the University of Oklahoma, as Minneapolis in 1969 was, according to McConnell, rumored to be “liberal and progressive…with a lively gay community.” So Baker and McConnell made Minneapolis their new home and decided to marry there…and there, on May 18, 1970, is where our story of the legal battle for same-sex marriage in the United States begins. It would take forty three years before such committed relationships would be recognized in Minnesota…but the two were together and faithful all that long while, doing whatever they needed to do to stay together.