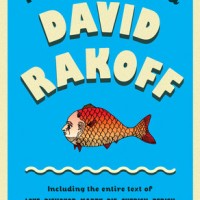 Disclaimer: I loved David Rakoff. I loved reading pretty much everything he ever wrote and loved discovering him on NPR on This American Life, of which I am a huge fan or on Fresh Air, with Terry Gross to which I’ve been listening for decades.

Rakoff was a regular on This American Life and it’s difficult to express just how much a master of comedic timing he was if you haven’t heard him deliver his own work. As funny and arch as David Sedaris, his mentor, is, Rakoff was a step to the obscure of that–funnier in some ways, as long as you were able to tease our the joke. But he was a subtle maestro.

If one has heard Rakoff, one hears his voice when reading him. It’s a delightful overlay, particularly in the more ironic essays. I think of the opening to one of his Op-Ed pieces for the New York Times on former First Lady Laura Bush.

Not known as a cut-up, First Lady Laura Bush told an absolute knee-slapper when she said “There is nothing political about American literature. Everyone can like [it] no matter what your party.” She was speaking about the literary symposia she’s been hosting at the White House.

“Isn’t it pretty to think so,” to quote Mr. Hemingway.

And then Rakoff goes on to cite how dramatically political American literature actually is, citing “Portnoy, Lily Bart, Bigger Thomas.”

Philip Roth, Edith Wharton and Richard Wright pretty much sums up the political element of American literature in one swift declension–you’ve got sex, class, gender and race all in one place.

And of course, it’s a short, smart piece that spirals to Truman Capote and ends with a famous Dorothy Parker quote.

That kind of succinct wit covering both the literary and the political with a hint of the gay tossed in was Rakoff’s oeuvre. He was massively well-read and that bleeds into almost everything he wrote–not in a bad way or, heaven forfend, a pretentious way. Just in a matter-of-fact, can’t-help-quoting, way.

You always get something fresh from Rakoff.

And so it was with bittersweet anticipation that I opened “The Uncollected David Rakoff.”

Bittersweet because, since Rakoff died obscenely young at 47 in 2012 from a particularly aggressive cancer (my LLR tribute to him is here: Laugh Till You Die: Dave Rakoff ), this would be the last morsel of Rakoff’s I would ever get to savor. Did I really want to read it all now? Because once read, there would be nothing left. No attorneys will come forward after a sibling’s death with a new manuscript hidden for decades to wow–or underwhelm–the literary world. This is it.

Rudnick’s descriptives and his recitation of how he (as did I) discovered Rakoff by hearing him before reading him, give another pang–this is it. The Last of David Rakoff.

Rudnick calls The Uncollected David Rakoff “addictive” and it is, because the pieces run seamlessly into each other and who can stop? These are precious morsels and for the most part, very tasty.

But while I am in agreement that this book is addictive, what it is not, is uncollected.

Uncollected implies “never before seen.” Or at least not in one place. But readers of Rakoff will be familiar with most everything here. Which is not to say this is the disappointment of a certain octogenarian’s “found” novel. But it’s not truth in advertising.

Apparently there wasn’t a lot to collect that was unpublished or not published in one of Rakoff’s other books.

Rakoff published three best-selling collections of essays, which include his own illustrations (no illustrations here). Both Fraud (Doubleday 2001) and Don’t Get Too Comfortable (Doubleday 2005) won Lambda literary awards, both times in the “Humor” category. Half-Empty (2010) won the 2011 Thurber Prize for American Humor.

Rakoff’s novel in verse Love, Dishonor, Marry, Die, Cherish, Perish: A Novel, which he was working hard to finish before he died, was published posthumously in July 2013.

That book is included in The Uncollected and comprises 80 of the book’s 340 pages. Another 55 pages are transcripts from two interviews with Terry Gross on Fresh Air.(Which are transcribed verbatim, which annoyed the hell out of me as both Gross and Rakoff are stylists–seeing Gross saying “mmm” in print or Rakoff “uh-ing” just feels wrong.)

Those are the cons of the book. No need to linger over them, but it must be said.

The pros are, well, Rakoff.

I suggest reading out of order, even though Timothy G. Young wanted you to read in the order framed by him. But I suggest you read the interviews first.

Why? Because these are the uncut Rakoff. Gross is the best interviewer in America and she asks not just the right questions but the questions for which we didn’t even know we wanted answers. She prods Rakoff in just the right way, so that what at first appears to be esoterica (NY versus New York, for example) is really essential–vital. Gross gets to the heart of Rakoff and he’s pleased to respond appropriately, appreciative of her appreciation of him. It creates a synergy that is just so worth falling into. (You can, of course, access the podcasts of these interviews as well.)

Gross is also keen on getting Rakoff to discuss his illness, which other interviewers might have side-stepped. Having heard these interviews, I remember thinking as she asked the questions about his cancer and the surgeries he had that she was prying. That it was over-much. But then the conversation evolved and it was, as she must have known it would be, the right thing. Because when he talked about it, we weren’t listening with voyeurism, but with a mix of concern and the feeling we were learning something to use later–as all revelatory material is.

(This was Rakoff’s second bout with cancer. He’s had lymphoma at 22, and as some of us discover if we live long enough to find out, cancer treatment can cause other cancers later in life. Rakoff developed a sarcoma in his collarbone which spread to his shoulder. He lost an arm and more.)

In “The Waiting,” Rakoff writes about what it is to be dying and know it and how the tests–the endless, endless tests–attenuate what’s left of one’s life while people are delivering the information badly.

“Those weeks before diagnosis can be the most torturous times. There’s a reason you’re called a patient once the plastic bracelet goes on.”

This is one of the most impacting essays in the book. It’s three searing pages.

The interviews with Gross really set the stage for Rakoff’s essays–particularly that one–and of course, the novel.

If you didn’t read the novel–and many non-poets (pretty much everyone) would be daunted by “novel in verse”–read it next. Read it knowing that it’s not going to be like anything else you’ve ever read and that you might need to read it twice, but that it will be worth it to do so.

“To pay for what crime, what malfeasance, what sin?”

Clifford’s mother mused, picking her blouse from her skin.

But Burbank? He might as well’ve brought us to Hades!”

So okay, the scan’s a bit off in that last line and “well’ve” is poetic license at it’s most blighted, but there’s 80 pages of brightness and brilliance and evocation and all the things the title says and remember, please, as you read it, that this was written by a man in his final days, final hours, even. He was dying, fairly horribly. He only had one arm left. But he was writing. And he’s using malfeasance so easily. And Burbank, for those of us who’ve been there, is indeed a geographical and demographic cousin to Hades.

So Rakoff was writing this as he was dying–writing something unlike anything else you might read or have read. (I’ve only read one other novel in verse that I can recall, and that’s Marilyn Hacker’s brilliant Love, Death and the Changing of the Seasons with which I will forever be in love, but she’s a renowned poet and Rakoff was not.)

After having read these things, go to the essays. You can read them in order or skip around. They will (no shade to Young) move as seamlessly either way because Rakoff wrote that way–so you could pick him up or put him down and ruminate on the brief slice you’d taken of his work.

But it’s not all brilliance; it’s an uneven collection. There are a series of smart, incisive–as Rudnick says–columns from the New York Times. One, “When Bad Things Happen to Do-Good People,” is about altruism and its opposites and there this line, so perfectly now: “One’s faith in humanity is restored, even as we feel a little bad about ourselves. (By contrast the antics of Donald Trump leave us feeling precisely the opposite.)”

There are essays from all the best places–in addition to the New York Times, there’s O magazine, The Wall Street Journal, Salon, Slate. Even Condé Nast Traveler.

He was, after all, Sedaris’s protegé.

There’s a real mix of things here to read–not quite a smorgasbord, but a serviceable sampling. There’s a piece on Frank Sinatra–perfect after Sinatra 100 and Lady Gaga in a tuxedo doing a really good Judy Garland imitation. There’s an essay on wedding toasts. A short piece from a collection of gay male authors. Several pieces on being a New Yorker–a transplanted New Yorker. A stunning little essay ” King of the Forest” about Bambi–the book, not the movie or the trope from the movie. A personal favorite, “The Love that Dare Not Squeak Its Name” in which Rakoff ruminates on Stuart Little and determines that the little mouse wearing everything from sailor suits to suits and ties is, well, gay.

It’s a fabulous essay on gayness and who but Rakoff would have situated it in Stuart Little? And will one ever be able to see Stuart Little as anything but America’s gayest mouse? No, no we shall not.

And that’s the lasting power of Rakoff–that he took small bits of things we thought we knew and re-positioned them for us. Angling them a little off-center to make us look harder. Or differently. Or maybe for the first time.

This is it. The last of Rakoff. It’s not a bang, it’s not a whimper, it’s the final lingering note. The fade.

David Rakoff was here. He made us laugh, he made us weep, he made us think. The Uncollected Works are some of his best and some of his not-so-best, but they are all him and as such, to be cherished. And damn the fates that there won’t be any more.