Robbie Rogers’ ‘Coming Out To Play’

Robbie Rogers’ ‘Coming Out To Play’ 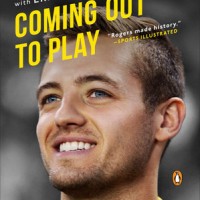 Jason Collins. Michael Sam. Robbie Rogers. Over the past few years, these men have been some of the first openly gay men to play in major league sports in America. Of course there have been those who have paved the way before them. In the past, players have come out after their sports careers have ended or have played in lesser-known and/or solo sports. However, these men were able to come out and remain playing their respective sports. The twin barriers these men faced were the machismo culture of sports and potential gay panic of their teammates. (Some might argue that these are two sides of the same coin, but I digress).

Football–I mean, soccer–doesn’t have as a pronounced culture surrounding it in the United States the same way other sports do. However, it is a major sport worldwide, especially in Europe. (Other things popular in Europe that the U.S. has yet to adopt: the metric system, reasonable vacation/parental leave and the continually slept-on Marina and the Diamonds.) One can simply search “hooliganism” to see the level of destructive macho passion that the sport can inspire, it’s roughly on the same level as ice hockey and American football in the States.

I don’t write the above to dismiss the fun and joy of soccer and other sports, but to explain importance of Robbie Rogers’ decision. With the messaging of this culture ever present in the back of players’ heads it is easy to understand other soccer players’ reluctance to come out and Rogers’ initial hesitation to do so. In choosing to come out and (continuing to) play, he is the second soccer player on an English team to come out (the first one to come out was the late Justin Fashnau) and the first openly gay player to play on a North American team.

The memoir begins by diving into Robbie’s life head-on, literally. It starts with him getting a concussion at a game and then moves through pivotal periods in the sportsman’s life.

Robert Hampton Rogers III was born to somewhat conservative and Catholic family in Rancho Palos Verdes, California. Early in his life Robbie is seen as a sports prodigy, known for his ‘explosive’ speed, not only playing soccer but also judo. His parents, two lawyers raising five athletic kids in the suburbs, seem to have a perfect life in young Robbie’s eyes, but end up divorcing. He also comes to believe that he is less than picture perfect as well, as he comes to realize that he is gay. It starts with his father’s angry reaction after seeing him play with dolls. As he grows older his family’s reactions to gay and lesbian celebrities, the taunting and pressure to conform from his school peers, and his church’s teachings have him bury his feelings and attractions.

While struggling internally, Robbie’s athletic career was on the rise. Robbie spends only one school year at University of Maryland, much to the chagrin of his mother who wanted her son to receive a college education. He spends the following summer playing in the Netherlands which has him feeling isolated, due to language barriers and distance from his family. He returns to the states to play for the Columbus Crew, but years later he takes the chance to play for Leeds United. After the aforementioned concussion and other injuries, he takes a break, by playing on a lower tiered team, working on his fashion line and interning at a fashion PR agency.

Robbie’s decision to start coming out begins as an accident: he randomly tells a woman at bar. From there he builds up the courage to tell his family and friends and to start dating. When a coach uses a slur during practice, it’s the tipping point for Robbie to leave the sport. Soon, Robbie decides to come out publicly through a blog post which is met with a volume of responses from a variety of people, organizations and media outlets. From there it’s a whirlwind of interviews and speaking engagements, including a GLSEN & Nike event for high school students in Portland. It is during this Q&A session that he is inspired by the teenagers in the audience, those fighting against discrimination from very young age, to reconsider his choice to leave the sport. He’s able to work out a deal to play for LA Galaxy, who he’s been playing for ever since.

Raised in a Mets and Islanders household, I never really enjoyed sports. I was the boy in the outfield occasionally picking at daisies or daydreaming, only participating because my father was my little league coach. Start talking statistics and my eyes glaze over. However, if you take me to a game and not only will I enjoy it, I’ll be able to follow along. I write this to explain the brief bit of anxiety I had when I started to read this memoir. “How much of this was going to be a sports story?” I wondered. Would this book interest me beyond his life as a gay man? My introduction to Robbie was not a soccer game but an issue of Hello Mr. magazine.

While there were dry parts for me, mostly when he has to explain the minutiae of pro soccer, it’s still an interesting story. I bring this up because this book knows it must cater to a variety of readers: those simply curious about him, those interested in sports writing and those adults and kids looking to learn. Sometimes Coming Out To Play stretches to cover things; Robbie tries to explain himself on his own terms while also doing Gay 101. It also has to navigate Robbie Rogers the person and Robbie Rogers the public figure both in and then out of the closet. The need to be various things to various people rang true to me as a gay man. With Robbie it is magnified exponentially by being a public figure.

Towards the end of the book, he pulls back the curtain somewhat on what being a celebrity entails. His family was initially frustrated with his sudden decision to come out publicly, not because they were ashamed, but because they had no prior warning about the media attention it would bring them. He also gives glimpses behinds the scenes of his post-coming out ‘press tour’ and working with LGBTQ organizations and major brands.

Where Coming Out To Play is at its best is when it situates what’s going on in Robbie’s life with current events at the time. Robbie’s rising career is happening during a period of time where there is an increasing focus on LBGTQIA issues. Robbie’s thoughts about being gay and coming out are placed alongside him hearing about Tyler Clementi and watching movies like Brokeback Mountain and A Single Man. It helps the reader to feel like they are alongside him.

The worst I can say about Coming Out To Play is that it gets the job done and not much else. The book is less concerned with telling a story and more about allowing Robbie to control his narrative and to express his feelings. (In a sweet and interesting move, Robbie will occasionally let his mother or a sister provide their perspective.) But Robbie’s plain-spoken prose is charming in its own right.

If you’re interested in learning about Robbie, his memoir will satisfy and do a good job of providing a sense of who he is. I, for one, was delighted to learn that he loved A Single Man. Hey, Robbie, if you’re reading this: I did my graduate thesis on Christopher Isherwood. Let’s chat.

Alice Munro: The Writer in Miniature
Tom Schabarum:Writing from the Well of Emotion
'Muse' by Jonathan Galassi