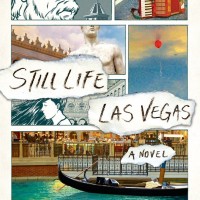 The title of James Sie’s novel Still Life Las Vegas evokes a perplexing contradiction. The city of Las Vegas, with its raucous slot machines and flashy performers, seems like a poor place to suggest a still life painting. The most interesting part of James Sie’s novel, however, describes the nascent relationship between Walter, an artistically talented high school student, and Chrystos, a “living statue” who creates scenes from Greek mythology for tourists in The Venetian casino. Sie assembles a kind of narrative still life as he twists through an often showy, sometimes sexy, and yet very careful arrangement of incidents.

Walter, the central character in Still Life Las Vegas, takes care of his seriously depressed father between shifts at  Viva Las Vegas!, a tourist trap where he works while he waits to graduate from high school. Walter begins drawing Chrystos and his sister, the human statues who appear in The Venetian, before the friendship between Walter and Chrystos moves outside the casino. Through Chrystos, Walters discovers that he is gay and learns how he can escape his supposedly cursed past.

Walter’s over-medicated father, Owen, depends on a Walter to take care of him. Years ago, Owen was a college professor but a tragic incident turned his life upside down. He continues to instruct Walter in legends from classical mythology and to recount stories about his missing mother. The backbone of the novel describes how Owen and his son wound up in Las Vegas in search of Owen’s missing wife.

Walter  searches for his mother, Emily. She was an adopted Vietnamese orphan who developed an early fascination for Liberace, even imagining that he might be her father. When Emily’s life becomes unbearable as an adult, she tries to regain some control by leaving her husband and son for Las Vegas. She confronts a range of wacky characters on her flight from Wisconsin including a knowledgeable guide named Lee (which is what Liberace’s friends called him) and two Liberace-loving gay men named Big Bang and Little Bang. Considering how dark parts of Still Life Las Vegas are, it contains a number of remarkably humorous scenes. While awkwardly shoehorned in, Little Bang’s story is probably the funniest part of the book.

Chrystos was trained in classic posing techniques in Greece and flaunts the muscles of a porn-quality demi-god. He serves as the catalyst to bring Walter out of his shell as he introduces him to alcohol and sex. Walter inevitably falls in love with the handsome Greek and begins to explore his new-found gay identity with him. 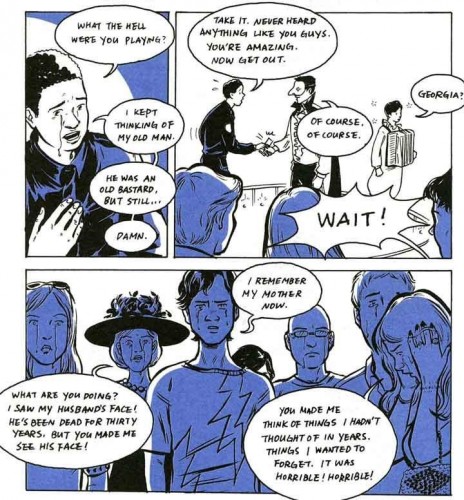 Part of a page from Still Life Las Vegas, drawn by Sungyoon Choi.

Still Life Las Vegas includes four visually arresting graphic sections by Sungyoon Choi that might mislead a reader into thinking that the novel might be aimed at young readers. These sections are not “illustrations” of the novel but reveal portions of the story that advance the plot in crucial ways and present some of the darkest portions of the story.

Sie gives his short chapters titles such as “Walter / Home / Later” and “Owen / Wisconsin / Earlier” to define the point of view and the time when the section take place. These jumbled views reveal horrible past incidents in small doses. Sie’s disjointed method of exposing secrets, Walter’s troublesome parents, the almost explicit sex, and the melancholy windup of the story differentiates the story from young adult books. .

Still Life Las Vegas is an innovative and engaging first novel from Sie. Some of the plot twists at the end are unsatisfying, but switching from Walter’s coming of age story, to his father’s fatalistic accounts of family curses, to his mother’s flight from Wisconsin, to Sungyoon’s graphic novel kept me absorbed. While a young reader would enjoy putting the story together, Sie has aimed the novel’s dark themes at adults who will be transfixed by this story of family dysfunction and the redemption of a teen coming out under difficult circumstances.

Howard G. Williams is a coordinator of The Pat Parker/Vito Russo Library Book Group and the chairperson of the long-running Second Tuesday Lecture Series, both at The LGBT Center in New York City. See www.HowardWill.com and www.SecondTuesday.org for more information.