Reflections on D. Gilson’s ‘I Will Say This Exactly One Time’

Reflections on D. Gilson’s ‘I Will Say This Exactly One Time’ 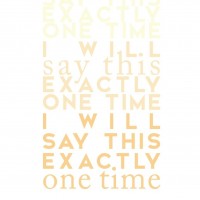 D. Gilson has seen me naked. And I’ve seen him naked, too. Well, almost. I’ve seen pictures, and so has he. And not really even then; not naked but in underwear. We don’t know each other, but we’ve chatted online. Let me borrow D.’s own words: “I know [him] quite well digitally, but [we] have yet to meet in real life. Such is contemporary culture.”

As writers, as white queer survivors of working class backgrounds, D. and I are attracted to one another’s work. We are different–he is a critical theorist and a poet; I’m a scientist and a nonfiction writer–but apparently we have enough shared sensibilities and community to orbit one another online. D. has a book out, I Will Say This Exactly One Time (Sibling Rivalry Press), and so he messaged me–on Facebook–and asked me to read it. Well, then, of course. Yes.

But: I was nervous when I started reading. What if I didn’t like it. Or, worse, what if it was typical white-gay-pop-academic bullshit: privileged and thoughtless ramblings on Britney and Truvada, bottoming and lust, and Foucault and Lacan. The table of contents worried me. Here are the gay pop icons, including miss Britney herself, remixed with critical theorists and poets.

My worry, happily, was misplaced. This book is good. Very good. It’s smart. But more importantly, it asks things of its readers. More importantly still: it’s naked and vulnerable. It feels things. Queerness–as defined by Gilson, relying heavily on the theorists he studies in his day job– is not just a sexual or gender identity, nor is it a politicized version of these identities. It requires a certain outsiderness. This makes it difficult to define, and litmus tests for queerness are essentially impossible. But, you know it when you see it. Or hear it (cue Britney). Or taste it (cue your mother’s cooking, the flavor that comes from how she holds her wrist on her hip). Or, read it (Hi Flannery O’Connor). Or when you smell it (the unmistakable smell of public sex). Gilson says that “our obsessions reveal a great deal about us as both individuals and as a culture,” and so I will say that I Will Say This Exactly One Time is very, very queer.

Every page bleeds desire and geography, even when neither topic is explicitly discussed. Whether D. is writing of and from Washington DC or South Carolina or the Ozarks, the land is present, haunting. The work itself is about place and how, in this time when movement is easier than ever, we try to quit where we are from.  Or, move truthfully, how we never can. D. is a southern homosexual and a southern writer; his family is from the south, his body is from the south, and his neuroses too, as if there’s a difference. So: this is a southern book published by a queer writer through a queer press based in Arkansas.

Anyone surprised at queerness in deeply red states have, I think, not spent enough time there: poor white people are queer indeed. It makes me wonder whether D. has lost his southern accent, and although I’ve seen him naked, or nearly, I’ve never heard his voice. Another wonder of our modern era: questions remain that only be answered with physical proximity or technology that acts as its surrogate.

D. and I are recovering from a white working class upbringing in places not too different from one another. We had to fight for survival, for voice. But these places, in many ways, haven’t changed. They remain unkind to our visible queerness. D.’s own brothers spit epithets at him on his trips back home, back there. This only means that our rejection from our homes is ever fresh: it is a central component of our selfhood, and so can never be forgotten. In fact, a certain white working class grief is our beginning. “Perhaps,” he writes, “my origin is the story of the grief of others.” Home and family remain a wound we remake every time we explain to another fag from Connecticut where exactly we come from.

We badly need white writers to write about race. We need white writers to consider whiteness and power and bodies (physical, political, cultural, literary), and specifically to reckon with the violence that is whiteness. D. writes about whiteness well, from the point of view of a white person who knows its violence intimately, at times as a victim (“In an interview room off the B Terminal, I learned that Homeland Security is highly suspicious of people taking covert pictures of federal officers… Why were you taking a picture of a federal office in a busy airport? Because he was hot.”), and at times as a perpetrator (“I hate that I noticed he was black, registered this, and that the ghost of my brother, a racist amongst other things, will never stop haunting”). Whiteness, named by Gilson, is a project that is inherently tied up with the classism and patriarchy and homophobia that do violence to queer bodies. He says it better than I can:

Being queer is “grass roots” because we know that everyone of us, every body, every cunt, every heart and ass and dick is a world of pleasure waiting to be explored.  Everyone of us is a world of infinite possibility.

We live in a time when queerness is not threatened most by heteronormativity, but by homonormativity, not by people outside of the LGBT community, but by the most powerful class, white gay men, therein.

I Will Say This Exactly One Time considers sites of great pleasure (the body, bars, bathhouses, stages and screens, families of different kinds, the page) and sites of great pain and loss (the body, bars, stages and screens, families of different kinds, the page) in ways that feel new and fresh. These sites are not disparate, of course. Rather they are overlapping; they bleed into one another. The pleasure, too, with the pain. Nothing is gotten free. For example: the suicide of D.’s brother and his mother’s cancer hangs over every essay in this book. One word that’s never used: remission. We are never on safe ground. Suicide is always an option. For example: the sexiest moment in this book (for this reader at least) was a kiss not stolen from a professor or a student or a writer or a colleague, but was a drunken kiss from D.’s brother. They had spent the day at a NASCAR event, then a shopping mall (where D. hooked up in the bathroom). Then they got drunk together, like so many families and lovers do. “And when you kiss, you will want to both remember that the world was one of possibility then,” he writes, “but not want to remember the particulars.”

You see, D. has written down his secrets. So, what to make of the title? I Will Say This Exactly One Time. Even on the cover, we have the words repeated. This is a book, the joy or agony of which is its permanence. These essays announce their editing in their work. They count their revisions (“ I have begun to write this essay many times”), so they weren’t written exactly one time, either. We can clearly read them again, again, again. The implication is one of importance. It’s a whisper between friends, words so precious as to be spoken and lost for all time. These aren’t words to pass by. To miss. I will keep this book on my shelf to revisit these essays in the way I do great nonfiction. Because great nonfiction has something new to say with each reading. D. writes, “It’s also about changing and staying the same, like one of Andy Warhol’s portraits, like Britney herself, like every living thing.” I add: like this book, like every written thing, too. Each reading writes a new sentence.

Finally, D.’s book says much about how those of us who grew up on dialup AOL interact with one another in the era of FiOS. D.’s first essay considers how, through social media and modern technology, we actively participate in our own surveillance. With social media, everyone with a Facebook page is a writer, and we all have a compulsion toward confession. Even now, in this review, I’m making myself a spectacle for my readers, just as D. Gilson has done with his family and his sex, just as Michael Jackson (he argues) did back before social media gave us all the opportunity to taste the dark side of celebrity.

We hear often about how technology is killing intimacy, but without Facebook, I might never had read D.’s essays. Without Grindr, I wouldn’t have met my boyfriend. Technology gives us the opportunity to build real connection–queer families–across long distances, or to connect us to those on our own blocks for sex, for dates, for conversation. But of course, technology can also alienate. Gay bars and hookup clubs closed thanks to Adam4Adam, then Grindr. We spend face-to-face dinners texting. But: technology means something more to those of us who exist on the margins. To queer and trans people, then, as well as people of color. Black Twitter isn’t just funny; it gets shit done. Grindr isn’t just for sex. It is for community. D. writes, “To name something is to make it home.” The internet, then, is ours to name, which we are doing. It’s our generation’s home, which we can never leave, which will never quite leave us for better or for worse.

What to do with these conflicting times? I have spent more than a few nights mourning the loss of some of my favorite writers who could–possibly–help me make sense of the world as it exists today. These are writers who built a world with me as a reader: David Foster Wallace on TV and culture and fiction; Susan Sontag on HIV and cancer and language; Audre Lorde on race, the erotic, anger; James Baldwin on the America we say we are and the America we live. D. might disagree, but I’m willing to let Foucault rest peacefully, but only because we still have Judith Butler. I long for these writers’ thoughts on the web, on Snowden, on, yes, even Britney.

But they’re gone. And we are–for the moment–still here, wading through a world that feels qualitatively different from their own. I see a new generation of writers–young writers, queer writers, working class writers, women, and trans writers, writers of color, and writers that check many of these boxes at once–trying their hardest, trying our hardest, to do this work for ourselves and for each other. D. is writing for himself, but also for me. And I’m listening and writing back. Nerdy working class white fags, united. I understand myself and my queer and white place in this world better than I did when I picked up this book. We can’t wait for our favorites to come back from the dead. We are here, we are all we have, and we are working. I will say this exactly one time: this is the only work worth doing.

Joseph Osmundson is a scientist and writer from rural Washington State. His writing has been published in The LA Review of Books, The LA Review, Gawker, Salon, The Rumpus, and The Feminist Wire, where he is an Associate Editor. He has taught Biochemistry and Biophysics at Vassar College and The New School, and is currently a Postdoctoral Fellow in Cancer Biology at New York University. Find him at @reluctantlyjoe on Twitter or at www.josephosmundson.com.