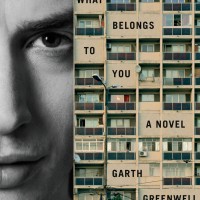 Winter is here, bringing with it a slew of new books to enjoy.

This month, Farrar, Straus and Giroux is releasing What Belongs to You by Garth Greenwell, an emotionally charged exploration of lust and longing.

On an unseasonably warm autumn day, an American teacher enters a public bathroom beneath Sofia’s National Palace of Culture. There he meets Mitko, a charismatic young hustler, and pays him for sex. He returns to Mitko again and again over the next few months, drawn by hunger and loneliness and risk, and finds himself ensnared in a relationship in which lust leads to mutual predation, and tenderness can transform into violence. As he struggles to reconcile his longing with the anguish it creates, he’s forced to grapple with his own fraught history, the world of his southern childhood where to be queer was to be a pariah. There are unnerving similarities between his past and the foreign country he finds himself in, a country whose geography and griefs he discovers as he learns more of Mitko’s own narrative, his private history of illness, exploitation, and want.

If you have ever listened to a Minnie Riperton song, you have surely come to understand the soul nurturing effects of an old school R&B song. The power of soul music and more is explored in Soul Serenade: Rhythm, Blues & Coming of Age Through Vinyl (Beacon Press), a new memoir from music journalist Rashod Ollison:

Growing up in rural Arkansas, young Rashod Ollison turned to music to make sense of his life. The dysfunction, sadness, and steely resilience of his family and neighbors was reflected in the R&B songs that played on 45s in smoky rooms.

Steeped in the sounds, the smells, the salty language of rural Arkansas in the 1980s, Soul Serenade is the memoir of a pop music critic whose love for soul music was fostered by his father, Raymond. Drafted into the Vietnam War as a teenager, Raymond returned a changed man, “dead on the inside.” After his parents’ volatile marriage ended in divorce, Rashod was haunted by the memory of his itinerant father and his mama’s long forgotten “sunshine smile.” For six-year-old Rashod, his father’s record collection—the music of Aretha Franklin, Bobby Womack, Al Green, and others—provided solace, coherence, and escape.

Traveling the byways and highways of relationships can sometimes be tricky business. The Narrow Door: A Memoir of Friendship (Graywolf Press), a new book from writer Paul Lisicky, examines the complicated contours of deep-rooted love and friendship:

In The Narrow Door, Paul Lisicky creates a compelling collage of scenes and images drawn from two long-term relationships, one with a woman novelist and the other with his ex-husband, a poet. The contours of these relationships shift constantly. Denise and Paul, stretched by the demands of their writing lives, drift apart, and Paul’s romance begins to falter. And the world around them is frail: environmental catastrophes like the Deepwater Horizon oil spill, natural disasters like the earthquake in Haiti, and local disturbances make an unsettling backdrop to the pressing concerns of Denise’s cancer diagnosis and Paul’s impending breakup. Lisicky’s compassionate heart and resilience seem all the stronger in the face of such searing losses. His survival–hard-won, unsentimental, authentic–proves that in turning toward loss, we embrace life. 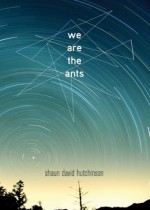 We Are the Ants

What if the fate of the world was in your hands? We Are the Ants (Simon Pulse), a young adult novel from writer Shaun David Hutchinson, examines the quandaries of a scientist faced with being the world’s savior:

Henry Denton has spent years being periodically abducted by aliens. Then the aliens give him an ultimatum: The world will end in 144 days, and all Henry has to do to stop it is push a big red button.

Only he isn’t sure he wants to.

After all, life hasn’t been great for Henry. His mom is a struggling waitress held together by a thin layer of cigarette smoke. His brother is a jobless dropout who just knocked someone up. His grandmother is slowly losing herself to Alzheimer’s. And Henry is still dealing with the grief of his boyfriend’s suicide last year.

Wiping the slate clean sounds like a pretty good choice to him.

But Henry is a scientist first, and facing the question thoroughly and logically, he begins to look for pros and cons: in the bully who is his perpetual one-night stand, in the best friend who betrayed him, in the brilliant and mysterious boy who walked into the wrong class. Weighing the pain and the joy that surrounds him, Henry is left with the ultimate choice: push the button and save the planet and everyone on it…or let the world—and his pain—be destroyed forever.

Can a marriage of convenience lead to something more? In Mutual Consent (Bella Books) romance writer Tracey Richardson details the unexpected consequences of a “practical” coupling :

As if juggling surgery and being an instructor isn’t enough, she’s recently taken on a more demanding administrative role at the medical school that was named after her legendary father. To make things worse, she’s now required to attend a growing number of galas, fundraisers and conventions.

Wouldn’t having a wife—a wife of convenience—help ease the burden that’s threatening to overtake her world?

Sarah Young’s heart belongs to painting. Much as she’d like to dismiss Joss’s ridiculous proposal, the art world isn’t paying well and she’s running short on cash. Playing a trophy wife a few hours a week would cover her bills and still leave plenty of time to devote to her artwork.

The deal is struck. But will the convenient pairing turn into disaster or prove to be a stroke of genius? With feelings deepening and attraction undeniable, can two women who have agreed to settle discover that they could actually have it all?