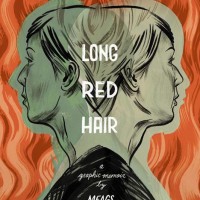 Long Red Hair by Meags Fitzgerald is a graphic memoir about growing up and coming out. That’s nothing new–in the grand tradition of Allison Bechdel and Nicole Georges, Meags adds her own unique perspective as a bisexual woman committed to celibacy. Coming in at less than 100 pages, this book was a very quick read, but so nuanced and elegant that I re-read it several times to appreciate the way Fitzgerald’s words work in tandem with the ways in which she presents them. Her art is deceptively simple, with unique panel layouts and a variety of hand drawn fonts. The book is as interesting to look at as it is to read.

Fitzgerald recognizes her early difference in her Uncle Erik, a gay man, and in Jessica Rabbit, a cartoon character responsible for the sexual awakening of many kids of that generation, I’d wager. She spends time drawing, role-playing with her family–huge AD&D nerds, and quietly flying under the radar.

The two most significant moments in the book are the author’s first kiss and her coming out. Her first kiss is in early high school with a gay boy who clearly is as uninterested in kissing girls as he is bad at it. Afterward, grossed out with the invasive tongue action, Meags throws up.

After coming out to her friend at a sleepover, Meags goes through a series of physical changes, mostly focused around the length and color of her hair. Over dinner, she comes out intentionally and explosively only to find the almost immediate support of her family.

For her tenth birthday, Meags is allowed to dye her hair red and in high school, she comes out by saying that she has a crush on an older girl with long, red hair. Throughout the course of this short graphic novel, Fitzgerald is seen speaking with a friend (who also has long red hair) about relationships and sexuality–the takeaway for me is that when Fitzgerald gains some autonomy or perspective on her identity, there is long red hair present.

It might be a bit on the nose, but it’s effective.

Pioneering Religious Leader and Writer Malcolm Boyd, 91, Has Died
'My Favorite Thing is Monsters' by Emil Ferris
'It Starts with Trouble: William Goyen and the Life of Writing' by Clark Davis