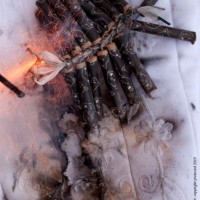 The following excerpt is from The State of Our Union: A Collage, a work-in-progress essay collection from Julie Marie Wade that explores same-sex marriage and heteronormativity/homophobia in Western culture. Julie Marie Wade is a novelist, poet and cultural critic. Her latest book When I Was Straight is currently available from A Midsummer Night’s Press.

Here’s a bad reason to get married: you’re pissed at your parents from way back and looking to settle the score.

I’m kidding of course, but only about the last part. My parents never mentioned the fiscal side of marriage at all, only its function as an antidote to fornication. For instance, they never told me that marriage conferred 1,138 legal benefits and responsibilities, making it the most powerful institution to which any individual could voluntarily commit. Since marriage was forever, I didn’t have to worry about divorce. Perhaps I didn’t have to worry about the fucking or the taxes either. Just find the right husband, and he’d take care of business, in the bedroom and the bank account.

But that right there was the trouble. Despite the fact that every teacher I ever had from pre-school through twelfth grade wrote “imaginative” on my report card, I could not quite imagine my way into a future where I was married to a man. I could imagine a wedding, no problem. I had been encouraged to do so since I could flip through a catalog and coo Pretty! at the bridal gowns and lingerie. But married life with a man: this one stumped me. I knew it was important. I knew I wanted to be loved. And I was nervous, among other things, about growing up and living in a house alone. A husband appealed to me like an anti-theft device. But if I had a home security system, wasn’t the man in the bed beside me a bit redundant?

Oh, yes, about that: Once, my college roommate was house sitting away from the dorm and invited me to come with her for a long weekend. There was one huge bed, so we shared it, and when I rolled over in the morning and saw her flushed, sleeping face on the pillow, my whole body began to tremble. I snapped a picture so I would always be able to remember that moment—I, a woman, in bed with another woman—but after the film was developed, I felt guilty.  The picture meant too much to me. I was frightened of what the picture might mean for my future.  And if my roommate ever found it—how could I explain?  So I burned the glossy print over the sink with my little pack of matches and then did my best to forget about it. Many a teacher had also written: Student possesses an exceptional memory. You can see about how well forgetting has worked for me.

But then there was Charlie. I liked him, genuinely. I didn’t mind waking up to his face on the pillow beside mine.  I just wasn’t thrilled about it. I was having a good enough time. I liked having a boyfriend and being told by total strangers at bus stops and the mall what an “adorable couple” we were. So what if my heart didn’t take flight inside my skin at the thought of spending a night—or a life—together? Other people saw us in public and understood we were on a date. Waiters put our order on a single tab and never entertained “splitting the bill.”

And my parents, well: they understood we were dating, and they didn’t like it. I considered this a bonus. Charlie was eleven years older, with a leather jacket and a beard. “Jesus had a beard,” I reminded my mother.

“Jesus wasn’t a Catholic,” she stage-whispered back. And what to make of the fact that my body flowered in quiet delight over my parents’ misgivings?

“I might just marry him,” I’d smile impishly over my shoulder at family gatherings. It wasn’t an orgasm, but for the present, it was as close to an orgasm as I was going to get.

Until recently, I’ve always imagined that Charlie was deeply in love with me and that, when I left him at the altar two years after we met, he renounced God and railed against the universe until his tears of rage and sorrow brought about a lightning storm that singed all the trees in that orchard. (See?  I’m imaginative.) But, truthfully, I met Charlie on the rebound from another relationship. I had to wait for him to end things with his girlfriend—officially—before we could even go out. So perhaps I had been a dalliance for him, a distraction from the disappointments of nearly two decades of dating. I was probably too young for him anyway, and I was definitely too gay for him, but at the time, maybe he enjoyed the “young” part. Maybe it felt good to have a twenty-year-old on his arm.

In a recent fit of Facebook sleuthing, I found that Charlie is “in a relationship.” I felt relieved, then amused, that I ever imagined having crushed him so completely he would never recover, never go on to love another. Then, I noticed he mentioned his “Spousal Unit” in a post, which was the best antidote to the word “wife” I had read in a while. Clearly, Charlie went on to marry someone, but he didn’t feel the need to update his profile to reflect this change in status. (And marriage, I am learning, is always a change in status, in both the social and the legal realms.)

I, by contrast, couldn’t wait to update mine. I had been married in my heart to Angie for years, but I wanted to be able to mark that shift from “in a domestic partnership” to “married” once an official ceremony had taken place. Did I find this prospect so appealing because I had once stood on the cliff of a marriage, looked over, and turned back from the leap? Or did I find it appealing because I had been denied marriage to my beloved for so long, even as I had spent a good number of those years outwardly cursing marriage and all who took part in this “exclusionary institution”?

The most likely answer is both.

I burned the wedding dress, of course, to illustrate the way certain dreams—and certain blunders—both go up in smoke. It took more than a pack of matches this time. It took a can of carburetor fluid, a team of people, and a barbecue pit, but the fire swarmed the flowers on the bodice just the same, and we all watched it, mesmerized. Though seven years had passed, this was when I truly said good-bye to Charlie, to my parents, to the white satin subjunctive of What Could Have Been. This was the Anti-Wedding, the Palinode. Nothing clears the air like a good fire.

And when I did marry, five years later, my wedding dress was black as smoke.

13th Balloon by Mark Bibbins
Read Thomas March's Contribution to the New Issue of 'Spunk [arts] Magazine'
“!”: Bookphile Seeks Free Book for Review, is Rewarded with Barry Webster's 'The Lava in My Bones'