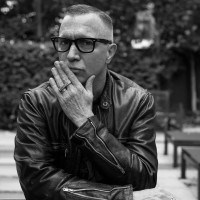 Toronto-based artist and filmmaker, Bruce LaBruce is largely drawn to the romance of the outsider. “The person who doesn’t fit in—the rebel,” LaBruce explains. “The romance of being different.” He reminisces about seeing a Mohawk for the first time after moving to Toronto in his late teens. It was large, thin, and the source of much intrigue for the young LaBruce; a contrast from the country folk he encountered growing up on a farm in Ontario, Canada.

“I came from such a horribly repressed, rural, small town environment. It was very homophobic and I was bullied,” LaBruce says. “It took me a long time to figure out how to explore my sexuality.” He didn’t lose his virginity until the age of 22 or 23, to a “closet-y” boy that he’d met at a modern dance class at university. They fell in love over a summer and took a trip to Provincetown where he finally confronted his sexuality. “After that I got the courage to start going to the saunas. Then I really acted out quiet extremely, sexually.”

Looking back, could one have predicted that this socially awkward boy he describes would become an internationally acclaimed filmmaker, writer and artist with work that celebrates the societal taboos, and blurs the line between high art and pornography? His work challenges sexual repressiveness, social assimilation along with the heteronormative values that are arguably fracturing our community. His vision has been hailed with retrospectives at TIFF/Bell Lightbox in Toronto in 2014, and at the Museum of Modern Art in New York in 2015. He’s left a mark on the world, and he’s not done yet.

Bruce LaBruce moved to Toronto in 1982 at the age of 18 to study film and dance at York University. “Toronto was so much more fun in the 80s because it wasn’t trying so hard.” He relishes in the thought of what the downtown core used to be, describing it as “wild west-ish,” with an excess of street prostitution and hustler bars all down the main drag, Yonge Street. He compares it to 42nd Street in New York back in the day with stories of tough rural folks clashing with the sophisticated urbane types. They’re tales of an era lost due to gentrification, yet again.

In the 80s, LaBruce was drawn to spaces where the marginalized would congregate since they were far more accepting of difference. He spent his nights at places like the after-hours, Voodoo club, which was home to punks, rockers, and gay folk. He also went to Nuts & Bolts: a bar for outsiders of all flavors, from the Goths and gays to the new wavers and house-heads.

LaBruce complains about the moralism found in mainstream queer culture today—it’s a seemingly different Toronto. One could argue that the celebration of individuality found in the 80s is now lost as a result of this modern ambition to assimilate to heteronormative ideals; that there’s this strange new desire in queer culture to gain the approval of straight folks by acting just like them, as opposed to celebrating the things that make us unique.

“Weird thing is, gay mainstream culture was never really about expressing individuality, for me. It always seemed very conformist,” he says, arguing that the community in the 80s was much less about being different than we might think. To LaBruce, it was always a gay, white, upper-middle class movement, and those people controlled the narrative and political direction. Perhaps that’s why he was drawn to the more alternative/punk/new wave venues that later inspired his revolutionary queer zine, J.D.s that he created with G.B. Jones.

“I don’t think it’s about seeking out a gay scene anymore. [Now it’s about] seeking out whatever scene you can find that’s alternative, interesting, or goes against the grain of sexual repressiveness,” says LaBruce, which is exactly what he did 30 years ago. As well as frequenting alternative and punk venues, he worked at Just Desserts, a restaurant owned by an ex-art student hippie who employed punks, junkies, musicians and artists—a group of people that helped shape his identity as an artist. LaBruce also muses over the clash between the staff and the bourgeois clientele, who would pop in late at night for some cake: a necessary friction, it would seem, to provoke the radical thoughts of a young man.

Bruce LaBruce talks about his past with confidence, and wears his history like a badge of honor.

“It was because I was so repressed, socially awkward, and introverted, because I’d been bullied: it all really contributed to the work I ended up doing.” In the 90s, he proved that he was a true rebel and romantic through his controversial films that continue to inspire today. When he couldn’t find what he was looking for in the gay community and straight punk scenes, he created what he wanted through his art and made it into reality for others to enjoy. Perhaps the most romantic outsider of them all, that he created, was “Bruce LaBruce” himself—the rebel, the radical, and the revolutionary artist.