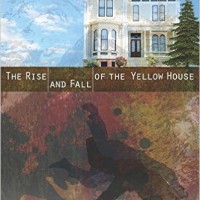 The specter of AIDS and loss hangs over The Rise and Fall of the Yellow House, by writer and critic John Whittier Treat. Set in Seattle in the early 1980s—post-Morbidity and Mortality Report that announced the illness in 1981, but pre-HIV test—Treat’s debut novel is an exploration of desire, drugs, family, murder, and the gay experience in the face of mass death.

Driving the novel is the love story between Jeff and Henry. Jeff is a white gay academic in his early thirties who has moved to the Pacific Northwest from New York to escape the doom AIDS (or “arf” as he calls it) which has begun to cast over the city. He leaves HIV infected friends and lovers (but not memories nor fears) behind. Henry is a generation Jeff’s junior who has lived enough life for the both of them and does not fear death. Working at the newly opened Starbucks when Jeff first meets him, Henry is a hispanic kid from a broken home who starting using and dealing drugs as an early teen. Difference and similarity mark their relationship. Henry is the object of many people’s desire, whereas Jeff, as Treat makes clear, is attractive enough, but nothing special. But he does share a name with one of Henry’s exs and looks just like another one, named Ryan—a drug dealing bad boy whose friendship with Henry’s half brother will bring heartache to the lovers, as well as the Yellow House. Treat has a gift for expressing the everyday thoughts and quips expressed in an intergenerational gay relationship that can seem commonplace within the gay community but may raise eyebrows in mainstream culture. Age is a factor in any relationship, but only one of many.

Based on a real house that existed in Settle, in the novel the Yellow House is owned by recently divorced middle aged woman named Nan, who has a son named Mike around Henry’s age. After a failed bid to escape the city for someplace warmer Nan decides to buy a big house and open it up the local gay-centric NA and AA meetings looking for a new venue as they were kicked out of a nearby church. Through Vinnie, an old friend of Henry’s—who is in charge of all the NA and AA groups—Henry, Jeff and Nan end up all living together in the Yellow House. But that is not to say they get to know each other well. Even between the two lovers much is left unsaid, even if much shared. Treat makes generous use of foils to provide information about the main characters. We get to know Jeff often through Nan. Both are getting over a relationship, and worry about what fate awaits them: death, loneliness, and another failed relationship. Nan surrounds herself with men who she thinks don’t want her, and Jeff seldom lets out his inner world. Both are afraid of being alone, but in different ways. Nan wonders if she will ever find love again. Jeff fears he will never let himself love, and, if he does, that AIDS will kill him or his partner. While the story would have been enhanced had Treat brought more of the characters on to the page, saving a reader from second guessing motives at times, he provides just enough information to keep Jeff and Henry relatable and embodied on the page.

Through Jeff, the reader gets a sense of what it was to be a sexually active gay man at the dawn of the known plague. Treat provides scenes of a quick hook up, a drugged encounter in a sling, and a relationship defining moment during a weekend getaway in which tensions flare when Jeff refuses to penetrate Henry without a condom. This choice comes back later as an indication to Henry how different they are.  As Henry points out, Jeff thinks because he is educated and can shut down the flow of his emotions he can escape the horrors of death, whereas Henry, already minoritized early in life thus given no guarantees, puts a higher premium on living in the moment because he may not make it 30. “Well, in my family,“ Henry argues, “everybody loses.”  A reader without a nuanced understanding of AIDS activism history may think that such an intersectional approach to understanding the illness is new; Treats provides proof on the page that such thinking has been around as long as people have been aware of the virus. Risk has never been evenly applied, always a greater price on the head of the people of color, and the sexually minoritized. In a memorable scene, an interracial gay couple who met in prison and we meet in an AA meeting, trespass on a crime scene and fuck. Tension leaps off the page, but by then we know the die has been cast, and all that is left is it for it to bleed into place.

In many ways, a case could be made that the novel is actually about drugs. It is drugs that bring people together in the Yellow House, and inform and dominate the majority if not all relationships in the book. And yet, with a haunting hand, AIDS is always there. In this way, Treat could be seen as making the case that there is no way you can untangle the reality of AIDS, drug use, and the gay experience. They are mutually dependent. By the end of the book, the Yellow House is empty with no one escaping despair, recrimination, or loss. What is left are memories, the stories we tell, and the ongoing AIDS crisis. Treat has given the world a great story, and a time capsule of a history that needs to be told.