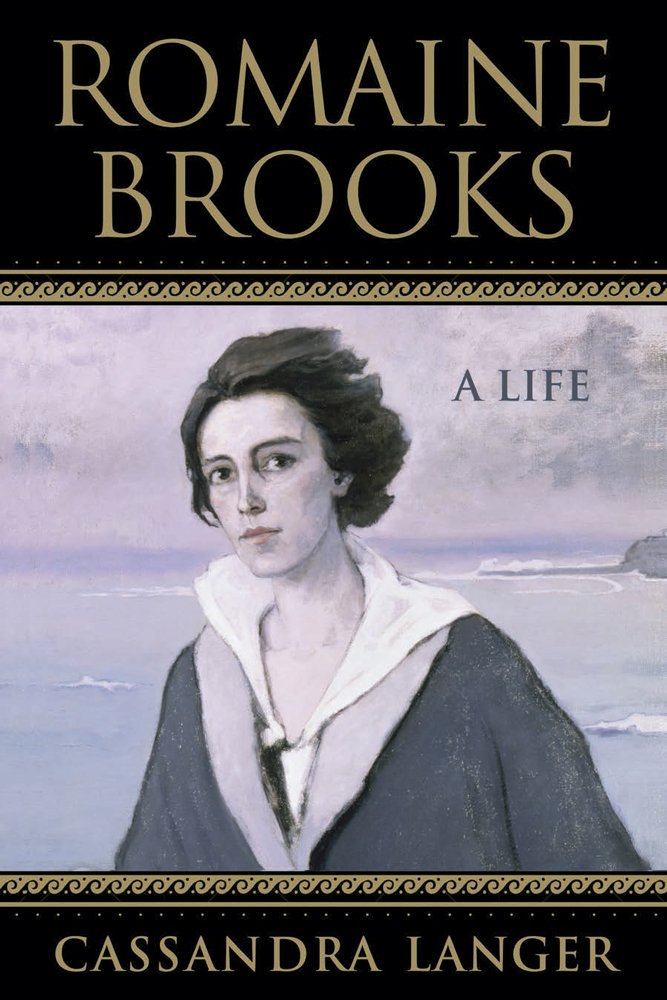 Cassandra Langer performs a difficult balancing act with her fascinating biography of the lesbian painter, Romaine Brooks. On the one hand, she tries to restore the painter’s artistic reputation and rightful place in the Modernist canon as an innovator whose figurative portraits were largely ignored by a patriarchal art world dominated by abstractionism. She also has the difficult task of contextualizing the complexities of a personality that was anti-Semitic, pro-Fascist and enamored of the government of Mussolini as well as the philosophy of the Italian soldier-poet Gabriele D’Annunzio.

Brooks remained with her lover and lifelong partner Natalie Barney in Italy for the duration of World War II. Ms. Langer takes to task the previous Brooks biographer Meryle Secrest who cites Romaine’s mother Ella as the cause of what “Secrest diagnosis as Romaine’s lesbian personality disorder.” Langer concludes that this statement branded Brooks as an unsavory role model and made her a “persona non grata in American art history.” She looks beyond “the paranoid depressive” that Brooks has been portrayed as and shows the drawbacks of “psychology’s pathologizing models.” In her final “Conclusion” chapter of the biography, Langer gives Romaine and her life a queer reading, describing her rejection of traditional heterosexual domestic roles, her pioneering of a new lesbian visibility in the visual arts, her “dandyism,” her embrace of androgyny and her camp sensibility. Langer states that “homosexuality, lesbianism, femininity, and effeminacy all defined the decadent perversity that a more virile masculinized heterosexual modernism in art rejected.”

Langer returns to the painter’s unsavory side and, again and again, tries to reconcile such a cosmopolitan lesbian artist’s defiance of the bourgeoisie with conservative politics and bigotry. Perhaps this is the least successful side of the book. Also, she appears on weaker ground when she enthuses over a close analysis of the portraits themselves, drawing meaning from their tonal play. Langer writes:

Brook’s paintings inspire a moment in which one forgets the din of the world and is transported through time and space. Think of a Brooks painting as a musical composition made up of varying subtle movements of colored spaces saturated with symbolic meaning . . .

It is to Brooks’ personal life and cultural milieu that Langer performs the feat of creating a strong, well-researched narrative. It is a portrait any reader would find sensitive, intelligent and engaging. Brooks, born in Rome, with an American father who divorced her mother when Romaine was at a young age, inherited half of the her family’s vast fortune, ensuring her life would be financially comfortable. Mental illness plagued her family, most notably her brother St. Mar. For a short time Brooks was married and gave birth to a young daughter who she placed in a convent. Alternating between Italy and France, Brooks studied voice, took up singing, and then dedicated herself to being a painter settling in Paris. She cultivated high society. In Paris, Brooks began an eight-year affair with Winnaretta Singer, Princesse of Polignac and heiress to the Singer Sewing fortune. At thirty-six, she met Elisabeth de Gramont called Lily, duchesse of Clermont-Tonnerre, the lifelong lover of Natalie Barney. And it is to Lily and Natalie that Brooks becomes engaged in an intense ménage a trois. Non-exclusive in their relationship, all three women had numerous affairs. The performer Ida Rubinstein also became involved with Brooks who later painted her portrait. Natalie Barney had an affair with Oscar Wilde’s drug-addicted niece, Dolly Wilde.

The intricacy of these relationships spanning World War I and World War II make for memorable reading. Barney, who was famous for her salon in Paris, is Jewish. Brooks protected her during World War II while they lived in Italy. Barney helped Brooks find a publisher for Romaine’s own memoir No Pleasant Memories. It is only in 1968 that Brooks had her first retrospective exhibition in Washington, DC. Natalie outlived Brooks who died in 1970 in Nice (Natalie died in 1972).

All in all this is an excellent well-researched biography that recreates the tumultuous years of an artist’s life who refused compromise from her convictions, both personal and political, as naïve as some of her views may have been. Romaine Brooks is decidedly an important addition to lesbian history.

The Case Against Censorship
‘That Inevitable Victorian Thing’ by E.K. Johnston
'The Indelible Heart' By Marianne K. Martin