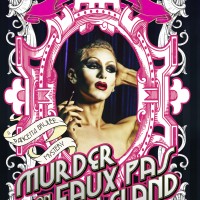 In his first Pancetta Brulée mystery, Casey McKittrick pays homage to the Golden Age mysteries of the ‘20s and ‘30s, but with twist: His amateur detective, Chet Burns, is a female impersonator (aka Pancetta Brulée) and, although the story is set near New Orleans in 1935, gay marriage is legal, gay relationships are accepted as commonplace, and Chet’s alter ego—suited up in four-inch heels and fabulous wigs—is taken as a matter or course.

Pancetta’s friends, two strikingly handsome and wealthy grooms, Oz and Raymond, hire her to cater their wedding weekend at Oz’s family’s remote plantation on Faux Pas Island, deep in the Atchafalaya swamp. A year ago, at their engagement party, Raymond’s father died in a gruesome accident, which many believe wasn’t so accidental. A dark cloud hangs over the wedding party both figuratively and literally (a hurricane is passing through), and Pancetta, a keen observer of human nature, immediately senses trouble brewing among the colorful and suspicious guests. Before long, one of the grooms is savagely murdered, and she has to take off her apron and solve the case.

McKittrick borrows from many of the Golden Age puzzle mystery tropes: an isolated and extravagant location, a complex set of clues, a romantic subplot, an exotic cast of characters with descriptive Dickensian names to match—Monroe Dangler, Beau Suggs, The Contessa Barbu, Elvira Wedgewood—and a final, dramatic drawing room reveal. What makes this novel truly entertaining, though, is Pancetta. Often in the mainstream version of this type of mystery, she would be just another over-the-top character, positioned by the writer to elicit light-hearted scorn and mistrust: “Let’s chuckle at the kooky cook in drag!” Pancetta, however, isn’t that character at all. She has both feet (heels) on the ground and makes a quick study of the other guests. She has strong moral backbone, a strong work ethic, and is vulnerable in an all too human way. Most importantly, she has no shame about who she is or confusion about being Chet and Pancetta; they are both who she is, and she loves the versatility that each role brings. Although it isn’t clear if all of the other guests know she’s impersonating a woman, there’s an openness and a directness to her “disguise” that serves as a counterpoint to other guests’ many dark closeted secrets.

McKittrick’s choice to set his book in an alternate past where there is no discriminatory attitude or legislation against LGBT persons is bold and intriguing, but also distracting. As I read, I yearned to know why Pancetta’s world had made clear social progress on LGBT rights, but hadn’t on other issues, particularly sexism: the women are clearly expected to cook and serve the men. Perhaps if McKittrick had included a scene where characters made reference to the reasons for this progress, I would’ve felt more firmly positioned in this new history, instead of being compelled to contrast it to what might happened if two men had attempted to marry in our 1935. But in truth, this is a minor gripe. Over all, Murder on Faux Pas Island is a swift and entertaining read, and McKittrick is a deft stylist and storyteller. I look forward to reading another Pancetta Brulée mystery in the future.

‘I Left It on the Mountain’ by Kevin Sessums
'True Stories: Portraits from My Past' by Felice Picano
'L Is For Lion' by Annie Rachele Lanzilloto