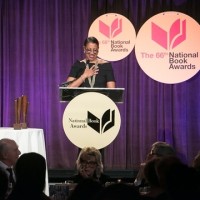 I’ve been covering the National Book Awards since 2003, when Shirley Hazzard won the fiction award. Some unforgettable moments since then: Nikky Finney’s acceptance speech—she talked about how African-Americans were the only Americans ever forbidden to write, and she invited the ghosts of those “forbidden ones” into the room; Lawrence Ferlinghetti, Gore Vidal, and Maya Angelou being honored for their lifetime contributions to letters. Last year’s attempted quip by Daniel Handler about Jacqueline Woodson’s allergy to watermelon was a low. Woodson’s New York Times piece about the experience is worth (re)reading.

But this year’s National Book Awards stood out. The shortlists alone for fiction, nonfiction, and poetry—all promising and diverse—are something to celebrate. Of the 15 finalists in those categories, 10 are woman and eight are people of color. (In Young People’s Literature, however, the finalists are all white.)

The night seemed to belong to Ta-Nehisi Coates, who won for the nonfiction award for Between the World and Me, his book long letter to his 15-year-old son about how as black men, they would endure a continual threat to their autonomy. Coates laments that he cannot make his son safe in a world where Coates’ friend Prince Jones, a deeply compassionate, gifted Howard University student, was killed by a cop in an absurd case of mistaken identity. The house (about 700) roared when Coates’ win was announced.

Coates, who dedicated the award to Jones, said, “I waited 15 years for this moment. The officer that killed him was not prosecuted…. I’m a black man in America. I can’t punish that officer. I can’t tell my son…you definitely won’t end up like Prince Jones. But you won’t enroll me in this lie. We are not part of it.”

Robin Coste Lewis won the poetry award for her debut collection Voyage of the Sable Venus. Publishers Weekly, which starred the collection, said Lewis “reworks fragments contextually rooted in ahistorical depictions of blackness, her meditations on the real origins of blackness are made visible. The result is a book that is formally polished, emotionally raw, and wholly exquisite.” At the end of her acceptance speech about honoring one’s mentors, Lewis thanked her publisher, Alfred A. Knopf, and her many teachers, including Yusef Komunyakaa, Cornelius Eady, and Sharon Olds.

Pulitzer Prize winner Adam Johnson had been having a “calm” awards night and didn’t expect the win for his short story collection, Fortunate Smiles, set in North Korea. In fact, he’d told his family to stay home in California rather than attend the awards ceremony with him. He cited his new reading list for 2015: all of his fellow finalists. (A Little Life by Hanya Yanagihara, shortlisted for the Man Booker Prize and the winner of the Kirkus Prize, was my favorite for fiction.)

Neal Shusterman won Young People’s Literature for his YA novel Challenger Deep, about a gifted high student struggling with schizophrenia. Shusterman gave an impassioned acceptance speech, explaining that the novel loosely borrowed from his son’s struggles with mental illness. Shusterman hoped his book would “help remove the stigma of mental illness.”

The National Book Foundation showed a video about BookUp—its reading program that connects undeserved youth connects with published and has given its students over 25,000 books. Lambda Lit’s own William Johnson talked about how the organization provides books to LGBTQ youth that represent their experiences so they do not have to “live in isolation.”

It had been a tragic week. There were the terrorist attacks on Paris and Beirut; another unarmed African-American man had been fatally shot by the police. Former National Book Award finalist Tim Seibles, a judge of this year’s poetry award, contextualized celebrating our visionary writers while contending with difficult days. “In a dark time, the eye begins to see,” he said, quoting Theodore Roethke; the authors are “trying to respond so maybe we’ll invite a little more sanity into the world.”

Publishing Ins and Outs: Do I Really Need an Agent?
Michael Carroll: On His New Short Story Collection, the Benefits of a Spare Writing Style, and His L...
Notes on Smut: A Look at Lesbian Literary Erotics