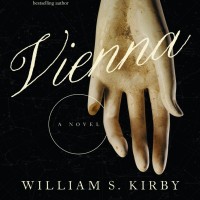 Like almost everyone else I know, I’m gaga over BBC’s Sherlock, binge-watching each season’s few episodes with avidity of an addict. When Vienna—William S. Kirby’s new novel and rather unorthodox take on a classic Sherlock Holmes story—landed in my lap, I couldn’t wait to dive in. Vienna brings together the crime and intelligence of a Holmes story but with a twist: “Sherlock” and “Watson” appear as women—Vienna and Justine, respectively—and to further twist the usual, the unlikely duo are lovers.

Now, I won’t dwell too long on the romantic aspects of Vienna because, beyond the skittish back-and-forth so common in brand-new lesbian relationships, I’m not certain there is enough spark between Vienna and Justine to justify their romance being so center-stage. But center-stage it is, and necessarily so for the plot, which involves murder, paparazzi, stolen art, and European royalty.

Vienna is a possibly autistic loner, sent to Brussels by her mysterious benefactor to work in a gelato shop, in hopes that she’ll meet someone, fall in love, and live a life with some semblance of normalcy. Justine is a med-student-turned-fashion-model in Brussels for a photo shoot that involves a series of wooden manikins carved by a Scottish artist with a complicated family history. The manikins—held in private collections around the world—are hollow and assembled by interlocking pieces and from the start something is amiss with them. When the story opens, Justine’s agent and boyfriend are on the scene in Brussels, following Justine’s report that the Prague manikin was moving—an event everyone chalks up to fatigue.

But there’s definitely more to Justine’s hunch than fatigue. Following her one-night stand with Vienna, Justine finds her boyfriend murdered in her hotel room, an event that throws the two women together on a wild tour of London, Iceland, and finally, the novel’s namesake’s namesake, Vienna.

Given Justine’s considerable fame, all eyes are on the couple as they set about tackling a complex, if not terribly urgent, mystery. What lies within the manikins? Why is obtaining the contents important? What key does Vienna (the character and the place) hold? As Vienna unfolds, it becomes more and more apparent that Vienna is her own sort of royalty (an orphaned bastard, but still), her genius long protected by British money and power. Without her photographic memory and ability to see patterns everywhere, the manikin mystery might remain forever unsolved.

Vienna, despite the occasional obscuring prose, keeps a nice pace: the plot is compelling, with history and setting woven nicely within. It echoes the brilliance of Sherlock’s interiority to a reasonable extent, though without the visual aids, Vienna’s map-grid visions can be confusing. And while this is no Benedict Cumberbatch–Martin Freeman duo, Justine and Vienna are both whip-smart, so their romantic antics aside, it is easy to spend a few hours with them as they cavort around Europe, bonking their heads together as they attempt to solve a longstanding crime.