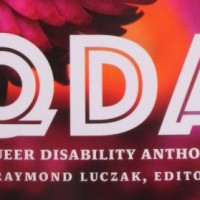 I’ve often said that we people with disabilities write all sorts of things in all sorts of ways, but the one thing we mostly have in common is that we never leave the body out of the writing. I’ve also found that close attention to the physical adds strength and focus to writing. QDA is an anthology that offers wild and affirming examples of this.  James Schwartz’s poems “Scene” and “Bent” are just eight and six lines long respectively, yet one is sharply erotic and the other drops you deep into intimacy. And this is accomplished through pinpoint physical scenes—”A crooked arm/Has enough strength/To grasp onto/His arching back.” Liv Mammone’s poem “Vagina Resigning” says “My vagina has put in/for a transfer from my legs/’irreconcilable differences,’ she says.” And Gregory Villa’s unsentimental (I’m a sucker for the unsentimental) essay “Limp” about “a less than perfectly functioning dick” has clarity and momentum and makes you laugh and punches you in the gut a time or two. Lucas Scheelk’s poem “A Prayer for a Non-Religious Autistic” thrilled me with the way it manifests a mental process in poetic terms. Here’s a poem that builds itself on the both the repetition that heals the poet and repetition as a poetic technique. Perfect.

Like I said, we write in all sorts of ways. My least favorite of these ways (and I’ve done this myself) is when it’s obvious that we’re writing directly to an able-bodied audience. But I have to take it back to allow for Liv Mammone’s essay “Advice to the Able-Bodied Poet Entering a Disability Poetics Workshop.” The poet says, in perhaps my favorite quote from the anthology, “I’m not your metaphor. Phantom limbs, deafness, or blindness as figurative language in your poems will result in unhinging my fucking jaw.”

Ariel Schrag: On Her New Novel 'Adam,' Writing for the 'L Word,' and Trans Inclusiveness
Two Poems by Nebeolisa Okwudili
'Who the Hell is Rachel Wells?' by J.R. Greenwell