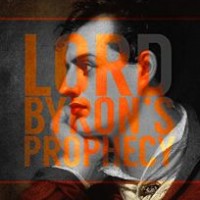 A darkly hallucinatory and unsettling fever-dream of a novel, Lord Byron’s Prophecy offers doppelgängers, apocalyptic visions, ominous portents, and eerie hauntings as it recounts a centuries-spanning tale of guilt–and appetite–driven men whose suppressed secrets and illicit desires poison their own lives and those around them. With a kaleidoscopic, continent-crossing narrating technique that leap-frogs between 1816, 1960, 2010, and 2027; Sean Eads (The Survivors) makes a case—a gothic-veined and sporadically operatic one—for what Freud called the return of the repressed.

Set in various American and European locales, the prismatic story opens with Adam Fane, a deeply miserable, raving, and semi-delirious English professor hobbling across campus. Tormented, he’s desperate to locate his son, Gordon, a handsome basketball god at Westervelt, the California liberal art college where Fane taught. In that 2010 time frame, the professor’s troubled less by the death of his wife in 2004, the considerable disconnect between him and Gordon, the life-long affliction of his withered leg, and his career’s sunset years than by hazy but worrisome memories of his youth at a boarding school in Pennsylvania and by “75-130-b.1,” a part of the college’s code of conduct pertaining to the dire professional consequences of sexual relationships between student and faculty. As he limps, Fane imagines everyone hurling “75-130-b.1” at him as an accusation. In his confused state of mind, he mixes up the names George (his sole friend in boarding school) and Gordon. It’s clear, though, that he’s struggling over misdeeds with both young men.

Initially an unlikable small town jock-hero who routinely says “Buddy” and “Bro” when not comparing conquests with his equally vain, privileged, and self-serving team- and roommate, John-Mark; Gordon is nevertheless upset by dreams, wildly oscillating moods, and disturbing as well as unexplainable episodes of intense physical discomfort. Outside of training for basketball and scoring at parties, Gordon’s also dating Amber Oxley, a youngish English professor who happens to be his father’s protege. A vicious fistfight with John-Mark soon alters his golden course.

In 1816, meanwhile, club-footed and sexually voracious Lord Byron is trading witticisms and insults with a fellow Romantic poet Shelley, of “Ozymandias” fame, and an entourage of hangers on at a Swiss lake shore. Despite the banter, the men are on edge, as strange and ominous storms have Europeans wondering about looming end times and godly wrath. (What they don’t know is that they’re in the midst of what will come to be called The Year Without a Summer, a weather phenomenon caused by a volcanic eruption in what was then the Dutch East Indies.)

Impulsively plunging into frigid lake water one day, Byron is overwhelmed by a hellish apocalyptic vision that includes his friends undertaking monstrous acts. Turned into a real-life poem, “Darkness,” Byron conjures a merciless portrait of the end of days:

The world was void,
The populous and the powerful was a lump,
Seasonless, herbless, treeless, manless, lifeless
A lump of death—a chaos of hard clay

As the novel progresses, Eads ably manages the jumps between time, place, and character while pushing the story toward Byron’s death in Greece in 1824 and depicting another, an echo, in 2027.

Now suffering from dementia, residing at the nearby Memory and Aging Center, and undergoing experimental drug therapy to restore memory, Fane’s awakening after a long steady decline exposes the nature of his crimes circa 1960 and 2004. Naturally, he’s affected Gordon (who’s as miserable as his father was in 2010). Sexually harassed at work, unhappily married, and profoundly conflicted about his interactions with Lucas, his bookish son; Gordon’s life of quiet desperation changes radically once again with his father’s revelations.

As an exploration of sexual abuse and its cyclicality, Lord Byron’s Prophecy offers a vision that’s harrowing and deeply saddening, especially because the men appear so helpless before their compulsions.

The inclusion of Byron resounds less successfully. Part of this might be a matter of taste. Eads’ version of Byron highlights the man’s propensity for poetic speechifying. The antiqueness and pomposity quickly become off-putting. Speaking to a Greek youth, Loukas, for instance, Byron declares,

Perhaps I came here to worship. I worship you among the other gods collecting dust in the ruined temples on the hillside. You will forgive me for not being a monotheist. In my ripe old age of thirty-six, I find polytheism and pantheons afford more comfort. Surely it is better not to put the Eggs of Faith in one basket, even one as fine a yours.

Whole pages of such queer verbiage makes the reading more of a chore (or a homework assignment) than a pleasure; and Byron himself remains elusive behind the performance.

Further, the Peter Ackroyd-esque entwining between past and present introduces a seance-like or literal haunted house element that seems at odds with the engaging and realistic account of the impacts of sexual dysfunction. Bullied, Whitman-loving teenage Fane’s madness (“Something inside his mind breaks with the cleanness of bone”), which results from his traumatic experiences at school and with his friend George, infects his son, and threatens the same to his grandson. That poignant but regrettable human drama doesn’t need to be mystically linked to Byron’s vision of “mad disquietude on the dull sky” to give it weight. It’s weighty enough.

A kind of precursor situated two centuries in the past and a continent away and yet somehow managing to share his apocalyptic vision with twenty-first century Americans, Byron detracts from the thematic seriousness while adding a metaphysical element that’s more ghost story than philosophical exploration of the relationship between then, now, and the future. Quibbling aside, though, the successes of Lord Byron’s Prophecy stem from a moving story of men and families ruined by simple matters like love and attraction that go so terribly, terribly wrong.
Lord Byron’s Prophecy
by Sean Eads
Lethe Press
Paperback, 9781590215531, 300 pp.
October 2015