‘I Must Be Living Twice’ by Eileen Myles

‘I Must Be Living Twice’ by Eileen Myles 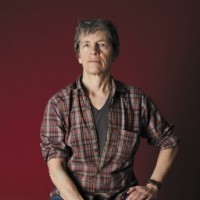 About a poet
you might
say – he’s really
good at
being alone.

There is infrequently anything as marvelous as being taken with a writer to a place in a whirlwind—to be rushed through streets, through lives, through interactions, through memory. You experience it with Frank O’Hara—and with great enthusiasm and joyousness (“Mothers of America, let your children go to the movies!”). You get it with Lucille Clifton. Morgan Parker (via Beyonce). The late, great Jane Kenyon (though in a more pastoral setting, her landscapes of the mind).

Even rarer is the poet who can take you with them, quickly and swiftly, but also allow you to see, really make visible the stuff of poems. Eileen Myles is such a poet, with such quick wit and lines (the lines often falling off and punctuating without punctuation, that the eye is guided in swift movement along the action of the poem), that you can’t help but be swept up. In “Hot Night”, Myles writes:

Hot night, wet night
you’ve seen me before.
When the streets are
drenched and shimmering
with themselves, the mangy
souls that wan-
der & fascinate its
puddles, piles of
trash. Impersonal […]

In a brisk, observant fashion, Myles creates a scene and a snapshot of city life in a way that feels specifically New York (but could be anywhere). This kind of all-out-on-the page approach is one that works well for Myles, (“I come from a long line of worshippers of strong crazy women”, from “Aurora”) who keeps the reader alternating between public and private (so that we often don’t know where the border is located)—between confession and explanation, if explanation should follow. This poetic abandon also happens in “An American Poem”:

“We know the city/hates us as we/sit in our/vanilla/stained rooms” writes Myles in “Just God.” The city may hate them, but the poems do not hate the city; all it’s torpor (when there is torpor) and brazenness, all joy and harrowing light.

'Wagstaff: Before and After Mapplethorpe: A Biography' by Philip Gefter
'Jam on the Vine' by LaShonda Katrice Barnett
Vita & Virginia: "A Longing Far Beyond The Sexual"