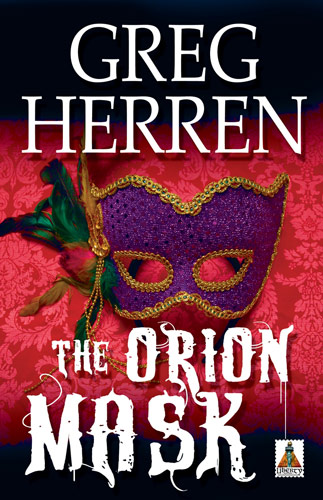 Greg Herren is best known as the author of the New Orleans-based Chanse MacLeod mysteries and Scotty Bradley adventures. Over the years, he has shown versatility in his writing—the MacLeod and the Bradley series are strikingly different in tone and approach—so it’s no surprise that his recent stand-alone, The Orion Mask, takes on another sub-genre: the romantic mystery.

As a teenage boy, Heath Brandon learns that his real mother, a glamorous Louisiana debutant, about whom his father and stepmother refuse to speak, killed herself when he was three. He is troubled by this discovery, but forbidden by his father from meeting his mother’s relatives, the Legendres, a wealthy and historic family who live on a famous plantation called Chambord near New Orleans. Now in his early twenties and his father dead, Heath is approached by a handsome true crime writer who believes that his mother may have been murdered. Heath contacts his family, flies to Louisiana, and meets his colorful relatives, one of whom, he soon learns, may be a murderer.

In his acknowledgments, Herren writes that, as a teenager, he loved romantic suspense and read widely in that sub-genre. In this novel, that love is apparent, and place, as is the case in gothic romances, plays an important role. Once a prosperous plantation known for its glassmaking, Chambord serves as more than a backdrop for the characters. It molds and textures them; it makes them who they are. As Heath enters this new world, he makes comparisons between its past and its present. The plantation, which years ago had been used as the set for “a grim black-and-white film starring two actresses in the twilight of their careers” (surely a Hush, Hush Sweet Charlotte reference), now is a struggling restaurant and inn. As Heath moves closer to the truth of his mother’s death, he visits parts of the property that speak more authentically of its past—the boathouse where is mother died and the cemetery where his mother is buried—and as he does, he uncovers memories of his own, memories of his mother’s death. Chambord awakens part of him that has been buried and leads him to a greater understanding of his mother and himself.

Although Herren develops a potent sense of place, Heath’s romantic interests, albeit entertaining, feel out of keeping with the seriousness of his journey. These men—the charming true crime writer, the buff closeted chef, and his first love, the jock—are bulging with muscles, often outfitted in tight tank-tops, and all attracted to Heath. They function as a means for us to know Heath more intimately, particularly his insecurities about love and sex. But they lack the texture of the other characters.Or maybe it’s that Heath, who seems to want true love so earnestly, focuses so much on these men’s bodies that he, at times, comes across as shallow. I concede that that may be the point, so I’m curious how he may evolve should Herren decide to write another Heath Brandon book. Chambord and the characters living in it have so much potential. I’m sure there are more dark mysteries waiting to be discovered under the low-hanging Spanish moss.