A Queer Look at Garth Risk Hallberg’s ‘City On Fire’

A Queer Look at Garth Risk Hallberg’s ‘City On Fire’ 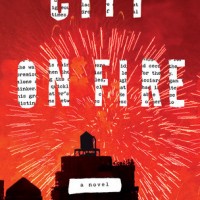 The 944 pages of Garth Risk Hallberg’s novel City On Fire may have received much attention—the film rights were sold to Scott Rudin, inciting a bidding war among NYC publishers that netted Hallberg an unheard of $2 million advance—but the novel, upon completion, merits such a page count. At its length, the book stretches broad enough to embrace many narratives, a compelling gay narrative among them that weaves very near the novel’s center. It’s a credit to Hallberg’s earnest ambition, as well as his evidenced ability, that he manages so many disparate strands surrounding a New Year’s Eve shooting in New York’s Central Park in 1977. The book’s expansiveness feels roomy enough for his large cast of characters to thrive.

Here’s an example of just how expansive this novel can feel: on the heels of the book’s prologue issued from an anonymous first person narrator, the novel shifts to its full-throated, third person voice. The first named character’s audiences meet are Mercer and William, interracial lovers making preparations for a makeshift celebration of Christmas in 1976 Hell’s Kitchen. No further than a few pages on, you learn the details of this haggard celebration, Mercer’s defection from a more traditional Southern black family celebration taking place in his Georgia hometown, equal parts fear and fealty to his “roommate” having kept him in the city. His lover William is himself evading an upcoming family celebration, the expensive invitation he keeps deliberately overlooking. Contained within those two scenes, Hallberg has covered a pretty remarkable distance—the span from a Georgia farm to the old-moneyed classes of New York City, from a smartly dressed black body to a “bedheaded” white one, and from the desire connecting these two, the attempt to establish something like a home with the Christmas tree connecting them, and the obvious homophobia of the Scoutmaster who’s just sold it to them.

As a fiction of recent history, the novel feels authentic, real and yet not quite—a thrill akin to stepping into an alternate reality. This escape feels especially ripe for gay readers. Positioned at this particular point in gay history, the novel offers a throughway, a means of inhabiting gay lives being writ just as a contemporary gay subjectivity was taking shape—gay lives spilling over into a broader counter culture, a punk scene infesting the Lower East Side. Herein, gay lives still jostle, and mosh, and sometimes sneer at the upstanding roles we’re invited to inhabit nowadays. There’s something adolescent in the novel’s desire to watch a couple nesting among the anonymous, bombed out factories of Hell’s Kitchen, but doing so still provides the pleasure of escaping into a city where William Hamilton-Sweeney III can become Billy Three Sticks, ex lead singer of a defunct punk band; the remnants of which draw the novel’s remaining characters together, in connections familial, fawning, or adversarial.

Readers should credit Hallberg for considering the romance of Billy Three-sticks and Mercer Goodman important enough to stitch them so close to the central narrative. The novel situates William Hamilton-Sweeney III as more than a dinner party guest, instead casting him in the essential role of the angsty scion to the Hamilton-Sweeney family, slouching in his chair opposite the family patriarch, a seat at the table not often offered gay characters in the ensemble casts of contemporary literary fiction—given the right to register complaint, to exempt oneself altogether. Often gay characters this surely seem to risk exempting themselves right off of the stage. Writing a gay romance so near the essential lineage of the novel allows the attendant gay identities (certainly the nascent ones around in the late 70s) to bring new illumination on the project of legacy building.

Also, we watch the depths of self-involvement that those struggling under such legacies can devolve into, leading them to miss deeper and more nefarious currents at work, or in the case of William’s heroin addiction, the insidious effects being wrought on themselves and their love relationships. Here we access the problem that affects many characters within the novel: how to inhabit their own space, the only space they seem allowed as human beings and the confines of which the city seems almost gleeful in policing, while reaching beyond that space toward connection. Near the novel’s outset, William harshly reminds Mercer, “This is another thing we’re allowed to do, Mercer. We’re allowed to have time alone.” Much later, the reader discovers Billy’s aim all along has been to find a means through his art of exposing the world to his way of seeing the city. Doing so comes at great cost, both to him and those who love him.

If City on Fire sets out to interrogate loneliness and the points of connection that sometimes arise within such a feeling; a large, whirlwind cast serves that intention well. Hallberg rightly chooses to allow those characters’ stories to arise in fragments. We see Hallberg’s skill, zooming back and forth between the subjective experiences of some and the objective voice of the novel. The usefulness of some of the tactics employed by Hallberg begin to come into relief–the aforementioned prologue, a humanizing letter from the patriarch of an aristocratic New York family, the Hamilton-Sweeney’s, a punk girl’s fanzine.

Here finally is the appeal of the novel, the care Hallberg shows in treating such a large cast with such close attention. At the novel’s center, nothing more ambitious than a thriller plot unfolds, a mystery established early on in the book, then complicated by the layering of backstory until we work our way back to understanding the initial quandary with improved perspective. It might’ve taken any writer as much time to weave together such a disparate cast of people. That developing backstory becomes the rush though, and sometimes part of the labor–working through its layers to see how the book’s connections are established, what kinds of networks are formed.

From Figs to Oranges: Madeline Miller on 'The Song of Achilles'
'Bingo Love' by Tee Franklin, Jenn St-Onge, and Joy San
'The Nearest Exit May Be Behind You' by S. Bear Bergman