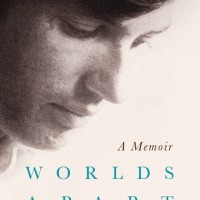 David Plante has always been driven by intimations of wholeness. His novels aspire to remind us of our spiritual yearning for unity, for what is universal and beyond the self. It is an ambition he returns to in his new memoir, Worlds Apart, which he has culled from his diaries spanning the 1980s and early 1990s. This most personal form of writing, with its tendency over time to “accumulate itself into an entity that is outside myself. . .by making connections, masses and masses of connections ” turns out to provide the perfect raw material for what Plante has in mind. The diaries (at least the bits he shares) are all but free of introspection, his pen trained only to what was said and done, and by whom. What results is an account of human connection, spanning out across the globe, of a world that would go right on spinning regardless of the writer’s fevered attempts to keep up. For readers who yearn more for good dish than spiritual pondering, it does not hurt that Plante’s “connections” are of the very best kind: Germaine Greer, Phillip Roth, David Hockney, to name a few. And they meet in wonderful places like London and New York. Even Tulsa, Oklahoma, with its gaudy Christian temples and gun-toting denizens, is not too far afield as to escape incorporation.

Of course, part of the wonder of the world Plante has created is its susceptibility to ruin. He opens with a note on the death of his partner, Nikos Stangos, with whom he shared the greater part of his life, including the years covered here. Then, passages written in London in which Plante ruminates on the news from back home in the States that his mother has lost her breasts to cancer. Cut to New York and he is on his way to the St. Mark’s Baths with Öçi, his dearest friend. It’s the early 1980s and the reader knows what Plante does not: that the men who go there will soon begin to die. Another of Plante’s intimates, the English poet and novelist Stephen Spender, begins his descent into old age. The void is everywhere, not least of all within Plante himself. As a child, he remembers telling his mother, “I never asked to be born.” She responds by slapping his face.

For all of that, Worlds Apart is not a terribly grim read. Everywhere Plante observes people reaching out for connection, new sources of love and life. Spender embarks upon his final great love affair with a young American named Bryan, fifty years his junior. By this time, he is married to a long suffering concert pianist named Natasha, and the question of how much she knows, what Plante and Stangos can say to comfort her without betraying their friend, is a source of delicious tension. Roth publishes a thinly fictionalized account of an affair he has while living in London with Claire Bloom, to whom he will soon be married. Plante himself enjoys a brief sexual affair with the painter Jennifer Bartlett and nurtures a passion for her that spans the years. Everyone, it seems, is at pains to keep the home fires burning while conquering the next adjacent land in the name of friendship or love. Or, if one happens to encounter Germaine Greer in Tulsa, Oklahoma, a bit of sympathetic company.

Still, the reader might easily forget about Plante’s metaphysical preoccupations if he did not find ways of returning to them. (When his publishers balk at his new novel, he writes them a passionate letter explaining the book’s philosophical underpinnings.) Instead, the real wonder of this diary-as-memoir is Plante’s genius for observation. Visiting Israel with Roth, he captures the famously self-referential author with a precision that makes him instantly recognizable to anyone familiar with his novels. During a teaching stint at the University of Tulsa, Plante ends up sharing a house with Greer, and the overlapping of their lives makes for a strange domestic comedy that shows her in wild variety of moods. One moment she is startlingly open to intimacy–the two share a bed, chastely nude, to make room for out of town guests–and the next sees her peevishly refusing to share her groceries as Plante sits devastated over the news of his mother’s death. Yet, he never resorts to caricature; his mode of detachment allows him the space to work the contradictions into a characterization that feels alive, convincingly complex, and deceptively effortless.

However much Plante may want to inspire us to contemplate what he calls “the undivided spirit,” that ultimate state of wholeness to which all our lonely souls aspire, Worlds Apart may actually do the opposite. The fallen world he offers up, with all of its messy differentiation, is far too seductive to wish away. Desire (and all that is done on its behalf) is always more interesting than its object, earthly or divine. And when Plante and his friends are through with living, we will miss them very much.

'The Argonauts' by Maggie Nelson
‘Irrepressible: The Jazz Age Life of Henrietta Bingham’ by Emily Bingham
Reading Samantha Irby is Like Hanging with Your Funniest Friend