‘The Lemoncholy Life of Annabelle Aster’ by Scott Wilbanks

‘The Lemoncholy Life of Annabelle Aster’ by Scott Wilbanks 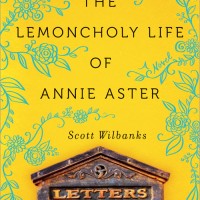 Half epistolary crime drama and half love song to Victorian-era America, The Lemoncholy Life of Annabelle Aster is a sweet, fun romp that never takes itself too seriously, but consistently entertains. Annie, a young and ailing San Franciscoan, buys a door at a consignment shop on a whim. However, there is more to her purchase than meets the eye. When Annie has it installed in her home, she finds that she can travel across time and space to a Kansas wheat field in the year 1890, whose resident has a strange connection to her. Soon, Annie and her friends are caught up in a murder that happened a hundred years in the past, but which still might be stoppable.

Though it does involve a murder, Lemoncholy is funny, soft and personable. Centered around realistic people and events, the premise of Annie Aster’s magic door is just a strange, but plausible, happenstance that allows the characters in this drama to interact. The book is primarily character-driven, though the many coincidences that surround the magic door do the most to take the plot forward. At times, characters seem to be living in a box made of inescapable events, an occasionally frustrating choice which nevertheless frees the author to explore the colorful personalities that populate this engaging story.

Outside of the charming characters, Lemoncholoy leaves the reader with more questions than it answers. It teases the reader with deep philosophical questions about the nature of time, family and even divinity, but its lessons are generally superficial. Love conquers, evil comes from within, and the reader is left to tie up the loose ends about free will and Cherokee elders themselves. Though several characters find that they can change certain events with a great deal of effort, only one even hints at the dark consequences this could have for the concepts of fate and self-determination. This theme lurks beneath the cheerful surface of Lemoncholy like a shark beneath calm waters. Eventually, some readers may wish the big fish would show itself if only to disrupt the neat, slightly bland idyll above it.

And, ultimately, Lemoncholy is idyllic. Even the murder sub-plot, strangely, ends up exactly as it’s meant to. (There’s even a whiff of a suggestion that the murdered man may not be dead after all.) The book’s sense of danger is never palpable, even during action-focused scenes, and there is no real suspense. (In some ways, this may be a consequence of Lemoncholy being a time travel book. The reader already knows how certain key points will turn out when they first learn of them within the plot. Taking on this handicap while keeping the story readable ought to be considered a credit to the author.) Because of the relative predictability of the story, the books may be considered a good choice for readers who like gentler books.

Annie and her compatriots are complete, self-sustained individuals whose quirks are only a portion of what makes them interesting. Factors like Annie’s unusual sense of fashion and Christian’s stutter enhance and endear these characters without seeming forced or twee. They are by far the strongest force working in the book’s favor and the primary reason that it remains an enjoyable read throughout.

Aside from its well-developed characters, the book is most enjoyable for its well-developed setting and characters. Lemoncholy is florid with description, mostly of Victorian-era antiques and stylistic affectations, lovingly obsessed with the chic and trappings of an anachronistic life. Sometimes, the plot seems to have been written to support this theme, rather than the other way around. Antiques enthusiasts and fans of 19th century fashion will enjoy the milieu.

‘Francis Bacon in Your Blood: A Memoir’ by Michael Peppiatt
'States of Independence' by Michael Klein and 'The Pillow Book' by Jee Leong Koh
Naomi Replansky, "The Oasis"

Anna Call is a librarian and writer living the the Boston area.