‘The Boys from Eighth and Carpenter’ by Tom Mendicino

‘The Boys from Eighth and Carpenter’ by Tom Mendicino 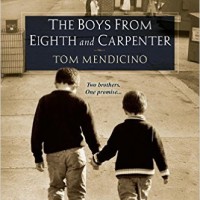 The Boys from Eighth and Carpenter are Francis “Frankie” Gagliano and Michael Gagliano, the sons of Luigi and Sofia Gagliano, and the brothers are as different as any two brothers could be. Frankie, the elder, takes after their mother, being fair and blue-eyed; while Michael, the younger, favors their immigrant father, brown-eyed and dark. Each boy also follows a distinct life-path. Both remain in Philadelphia, where they grew up. But Frankie follows in Luigi’s footsteps, and takes over his barbershop, transforming it into a hair salon after Luigi dies, and has a series of unhappy relationships with men. Michael attends Princeton, graduates from law school, eventually becomes a prosecutor, weds, fathers a son, and to all appearances has a happy marriage. For all their differences, they are bound by a vow—an oath sworn to their mother upon her deathbed when they were eight and three years old, respectively. Promise me you’ll always take care of each other. Frankie, you make sure you tell your brother I asked you both to do that when he’s old enough to understand. Tom Mendicino’s latest novel explores the bonds of brotherhood, literal and metaphoric, between two brothers who on the surface appear so dissimilar.

This vow, then, is the pivotal event in the two boys’ lives, and influences all of their subsequent decisions. For Frankie, it keeps him from loving any of his step-mothers or from ever escaping South Philly. Michael, for his part, refuses to respect, much less love his father for the abuse he heaps towards him and his older brother, especially once Frankie’s sexual orientation becomes known. However, their vow is fully put to the test forty years after they swear it, when Frankie commits an impulsive act in the early hours of April 12th, 2008. The novel’s prologue begins with this event, then Book One back-tracks to 1920, beginning the Gagliano saga with Luigi’s arrival in America, and continuing with a series of snapshots in the lives of his sons:  birth, First Communion, first sexual experiences, graduation, marriage, etc…. Book Two retells the events of the month leading up to Frankie’s unthinkable act. The final Book recounts the events immediately following, with a short denouement as epilogue.

The novel examines more than the ties that bind family members together, it provides an example of the immigrant experience set against the latter half of the twentieth century. Mendicino exposes the tensions not just between immigrants and the dominant culture—the question of whether to assimilate or to reject, and if so, how much—but also between different immigrant communities themselves. The neighborhood around Eighth and Carpenter is far from static, as different ethnic and racial groups move in, out, become established, acclimate to the dominant culture, or become displaced. The question of where or how one “fits in” is complicated for Frankie by his sexual orientation, which is unacceptable to both the Italian-American community and the larger American culture. Michael’s rise in socio-economic status causes him to leave this largely working-class neighborhood, literally and figuratively. And yet he does not escape it, as it is Frankie who leaves Eighth and Carpenter for good at novel’s end.

This final paradox is one of many throughout Mendicino’s novel. The contradictory nature of family love—whether it is love between family by blood or family by choice—recurs repeatedly, and will surely resonate with anyone who has ever tried to explain to an outsider their fondness for and loyalty towards the people who simultaneously drive them up the wall.