The Banal and the Profane: Mike Miksche

The Banal and the Profane: Mike Miksche 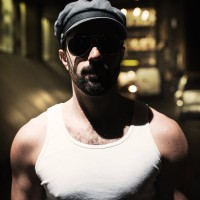 “I constantly struggled to find the line between smut and literature.”

This month’s  “Banal and Profane” column comes to us from writer Mike Miksche.

Logan was rubbing his crotch while he drove down the highway. He looked over at me in the passenger seat and smiled. I had my zipper down, cock out, and was stroking myself as cars passed by. It felt good. He had no problem with it either. He encouraged me even, begging that I didn’t stop.

We were on our way back from the Scottish Festival and Highland Games in Fergus, Ontario. Logan was Scottish but had been living in Toronto for a few years so we thought it’d be fun to do a day trip there. We ate haggis and Scot pies, listened to bagpipes, and watched the “heavies” where burly men tossed cabers around like brutish heroes.

The entire day, Logan had this nostalgic look on his face, proudly claiming that the customs presented at the games were exactly as they were back home. A part of me was envious that he identified with this culture so much. There was music, food, and even sports that he could look at and say, “This is who I am”. Me, on the other hand, I’m first generation Lebanese and I often feel more Lebanese in Canada and more Canadian in Lebanon, which, I guess, neutralized any sort of identity I could establish.

Logan and I had met about a month ago at a Pride party and, although there was a strong connection, our story was pretty normal. I always thought that after DH, I would meet some leather Daddy who would keep me as his boy and train me further as though it was my fate. Maybe that’s what I needed but instead I found myself falling for a clean-cut Scotsman who, despite his wild sense of humor was quite vanilla. I knew that he could never understand the sort of relationship that I shared with DH who trained me as his boy and introduced me to the world of radical sex.

I finished the first draft of the Logan piece by the late afternoon. When I read it over I realized that this was first time I hadn’t written about sex explicitly for my column. For a moment, I thought that perhaps it’d be good to stop writing about sex—people would take my work more seriously. No, that’s silly, I thought. This column is who I am.

After I’d arrived at work that morning I sent an email to my coworkers reminding them of the launch of my book, Paris Demands on Thursday. I worked in the promotions department for this one media company: an office job, basically, but with foosball tables, multi-colored furniture, and no dress code. I only included those in my email that I worked closely with and said that I’d even have a 65-year old woman reading a provocative piece that I wrote. If they couldn’t make it, I had copies of the book at my desk for $15 each. The majority of the people didn’t acknowledge my email whatsoever. Even when some of them saw me in the halls or during meetings in the afternoon, they didn’t say a thing.

My coworkers were aware of the sort of writing I did — I had nothing to hide. Some were sweet and followed my column weekly, asking questions about anecdotes or characters, while others were less supportive. One time, during a meeting, this guy implied that I must have all sorts of STDs. I didn’t bother telling him that nobody says “STDs” anymore (it’s “STIs”—how stupid). Instead, I told him that I’d recently been tested and didn’t have a single thing.

While at work that day, my elbow became swollen and by the early evening I couldn’t move it at all. Logan was convinced that it was just an insect bite so he took me to the pharmacy to get some antihistamines. One look and the pharmacist said that it was likely infected and I needed to go to emergency room right away.

We got to Mount Sinai just before midnight. I felt guilty for dragging Logan with me so after I checked in, I told him that he could leave. He had to be at work early the next day, plus, I didn’t feel that we’d been dating long enough to oblige him to the ER waiting room. “Stop it,” he said, bothered that I’d even suggest that. He sat with me like it was his duty.

It was true—even in sickness, I was perverted. He poked it some more.

The doctor finally came in and looked at my elbow. Yep, it was infected, elbow bursitis so they needed to cut it open to drain the puss and blood. “I’m going to warn you,” the doctor said. “It’s going to be painful.” It wasn’t that bad — I’m a masochist after all. Although when she cut it, no puss came out. There was only blood but my elbow felt a whole lot better as a result. She said that once the freezing went down, I’d feel the pain from the incision. They gave me Percocets, and we were on our way.

WEDNESDAY | ONE DAY UNTIL THE BOOK LAUNCH

I had to keep the plan that afternoon with my friend’s friend, Margaret, who was supposed to come by to rehearse the piece she was going to perform at my book launch. I stopped taking the Percocets by noon so that I’d be coherent for her, and replaced it with a double dose of Extra Strength Advil.

Margaret had done some acting on the side as a hobby, which was great, but I’d actually chose her because she was in her mid-sixties. Rather than just getting her to read from my novel, I wanted her to perform a piece I’d written for my column about the Folsom Gulch, a gay video arcade in San Francisco. This wasn’t some rapping grandma bit though. I constantly struggled to find the line between smut and literature. By having an elderly woman read a piece about glory holes, I hoped it would desexualize the story so that people would see that it’s not just about a cock poking through a hole in a buddy booth. The story was about how I’d attempted to use sex to forget about DH but couldn’t because he was a part of me. I wanted people to understand the history we shared, the loyalty I felt to him as my mentor and my unavoidable fate.

When Margaret arrived, I took more Advil for the pain, and we got right down to business. She stood up and read the piece, going for a deadpan approach. I needed more emotion though so I asked her to read it again, telling her to pretend that it was her at the Gulch, not me, reacting the way she would. Midway through a paragraph I stopped her. “That’s perfect — do it exactly like that,” I said. I got her to read the piece over and over until it was right. She got frustrated at times and I honestly thought she was going to quit, but she didn’t. During the final read, I could hear the longing in her voice, as though DH was hers, and no matter how hard she tried to forget about him, he would always live under her skin. She made me proud of the piece. This was my story.

Logan was kind enough to help set up for the launch at Glad Day Bookshop that evening. He offered to unfold the chairs and line them up to face the sidewall where the reading was going to take place. As I fiddled with the projector, I watched him grab some more chairs and thought how cute it was that he’d dressed formally for my reading, with his dress shirt tucked in like he was attending a proper show. He looked handsome yet modest; he was everything that I should’ve wanted. Deep down, I knew we were dissimilar and demanded different things from life. I mean, I wore a Hawaiian shirt with shorts and sneakers to my own reading, but having him there all dressed up made me smile.

Just before seven, people started to arrive. The first two were friends of Logan that I’d spent a bit of time with over the last few weeks. They were great guys, an eccentric couple from Rosedale. A few minutes later, some of my peers arrived, then some old friends, then coworkers, then my neighbors, then more of my friends and more of Logan’s friend until the entire space was full of people. I was grateful that I didn’t have to read to an empty room but found it strange to have them all turn up to witness me read confessions about who I am.

At 7:30 P.M. people got seated. My friend Jodi, who was a stand-up comic, agreed to host the launch. She opened the evening then introduced me through my bio. I went over to the microphone after and preceded to read a piece I wrote for the Gay Men’s Sexual Health Alliance about this guy that pissed on me once. It was hard to tell what the audience thought about it, but they laughed mid-way through and clapped when I was done. Jodi made a funny joke about watersports and continued with a comedy routine of her own that lasted about ten minutes. She really got the audience going like I knew she would.

After she finished I went up to the microphone and thanked her. “Next,” I said. “Actress, Margaret Henderson is going to be reading a piece I wrote for Daily Xtra. I asked her (or rather begged her) to read this because I’m constantly struggling to find that line between smut and literature. Sometimes I have people, who, after reading my column, ask for naked pictures of me. I wanted Margaret to read this because she’s not a young gay man and I wanted you to focus on the words rather than sexualizing the piece.” I paused and looked back at the crowd. “What I realized though, and I only just realized this, is that if people think what I write is smut then they can go fuck themselves.”

THE PREVIOUS SATURDAY (AGAIN) | FIVE DAYS UNTIL THE BOOK LAUNCH

Logan was rubbing his crotch while he drove down the highway. He looked over at me in the passenger seat and smiled. I had my zipper down, cock out, and was stroking myself as cars passed by. He encouraged me, begging me not to stop.

It felt good because this sort of behavior is who I am. It’s based on sexual impulses, curiosity, and instinct. Sex isn’t just sex; it’s a way to identify and connect with those close to me. DH taught me this and now, after all this time, I get it. I can appreciate who I really am. This is my culture.

I finally came in the car, shooting halfway up my shirt. Logan looked back at me in awe. He was a spectator in all of this; we’re worlds apart, I knew that and it bothered me but I couldn’t help it: I was falling in love with him.