Sara Jaffe: On Her New Novel ‘Dryland’ and Tapping into the Adolescent Mindset

Sara Jaffe: On Her New Novel ‘Dryland’ and Tapping into the Adolescent Mindset 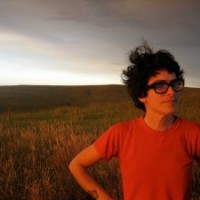 “[ …] I think a big contradiction of adolescence is that you are thinking about yourself and your sense of identity constantly, everything is ‘I, I, I,’ but truly your identity is so unformed and incoherent”

Sara Jaffe’s terrific debut novel, Dryland (Tin House), takes place in a blurry 1992. It’s Portland, it’s grey and drizzly, and its narrator, Julie, exists in a zone of adolescent fog. Navigating her older brother’s conspicuous absence, her growing distance towards her best friend, and her creeping attraction to another girl, Julie, a high school sophomore, slowly, painfully becomes herself over the course of the novel.

Much of Dryland occurs in the swimming pool, after Julie joins the swim team at the behest of her classmate (and later crush) Alexis. Although her older brother was at one point an Olympic swimmer, Julie is just okay. Worse than okay: she frequently stops to rest in between laps. At one point, Julie’s coach asks the team to close their eyes and visualize “who you want to be out there on the water.” When Julie closes her eyes, she sees nothing. Throughout the novel, her feelings and motivations remain cloaked to herself, and others. Written with a precision of language that is in constant tension with Julie’s inchoate subjectivity, Dryland is a queer coming-of-age narrative invested in failure, incoherence, and not-knowing.

Jaffe has published fiction and criticism all over, including Fence and BOMB. In addition to writing, she has a background in music, and played guitar for the band Erase Errata for some years. Here, we talk adolescence, coming out, craft, and the politics of refusal.

“Nothing’s set in stone,” Julie’s swim team coach says during the first practice. “Water—it’s the opposite of stone. Water moves.” Yet Julie is a character who stops. During practice, she takes regular, gratuitous breaks between laps (much to the irritation of her teammates): “I’d take off, sail for the first lap or two … and then I was done.” What’s going on in these moments of rest, and refusal?

For me the stopping is one of Julie’s most important actions–or inactions–in the book. Stopping epitomizes her ambivalence about swimming—she’s stopping not because she can’t go on, but because she’d rather stop than continue to swim poorly. And every time she stops, she gets to start again And the first few laps are always graceful and easy, so if she keeps stopping, she can endlessly avoid the part when the going becomes challenging, when her body doesn’t function as she wants it to. Paradoxically, as I guess is the case with most forms of physical prowess (I’m not an athlete), when her body is functioning at its best, when she’s “sailing,” she doesn’t feel aware of her body. Bodily awareness both precipitates and is the result of the breakdown.

So if stopping is what it takes to bring Julie to her body, if it’s a moment where she gets to ask herself not only what her body can do but what she wants her body to do, then it’s also a moment of resistance. A bodily failure that can open up another set of possibilities. I think Julie experiences something liberatory in the stopping, even if she doesn’t quite know what it is yet.

This is making me think about just how much Julie doesn’t “know” yet. She seems to exist in a kind of zone of fog—there’s a lot she doesn’t, or can’t, articulate, and she moves through her world with a hiddenness that seems quite painful—especially since it’s in part related to her queerness. (But maybe this fog, too, is potentially liberatory?) Do you see Dryland as a coming-out narrative? 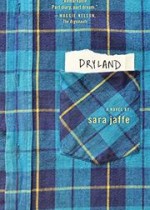 In the typical coming-out narrative, I think, the protagonist has this secret (being gay/queer) and the struggle is one of whether/how to reveal. But as you said, there’s so much Julie doesn’t know, or resists knowing, even about herself. So the first necessary reveal–“coming out to herself”–would have to happen before she could then come out others, and I don’t think she really has that revelation in Dryland (though in the future narrative I imagine for her, she probably would have it soon.) I had a last minute worry from my editor about the fact that Julie doesn’t ever have an “Am I gay?” moment, but I felt really strongly that that moment didn’t belong in this book. I was thinking a lot about the relationship between experience and identity. For Julie, experience (the experience of being attracted to Alexis, of making out with her) comes before any sense not only of claiming a queer identity for herself, but of even knowing what that might possibly be. It was an intentional inversion of my own experience of identifying as queer well before getting the chance to make out with any girls!

So to answer your question: maybe it’s a coming-out narrative from the reader’s perspective; the reader gets to go on a journey of observing, identifying, maybe labeling Julie’s sexuality even if she doesn’t. My hope is that the reader feels some productive tension there.

Yes! I certainly did. I’m really interested in how you’re using first person here. Julie is such a cloaked character that it’s surprising to remember she’s actually our narrator. Even as the novel is thoroughly immersive, the distance that you are able to sustain is unusual for first person. How were you thinking about point of view?

I’m really glad to hear you say that! I decided early on to write the book in the first person, because it felt right to me in terms of tone/mood—I wanted that sort of fixed stance. But I also wanted to push against the idea that first person is a shortcut to intimacy, or is somehow analogous to a character having a well-defined sense of self. So instead of thinking of first person as allowing me unfettered access to this one character, I chose to think of it as a useful limitation—I’m only writing from this one person’s perspective, so that means the story will necessarily be partial, often wrong. But then, how to get that to come across to the reader? One thing I tried to do was, in scenes where other characters are talking or acting, to actually write their words or actions by imagining the scene from that other character’s perspective–in the scene where Julie goes over to Ben’s house for the first time, for example. By trying to render those moments unmediated from Julie’s interpretation, I think we step out of her POV slightly, and get to train our gaze on her from the outside. (So maybe paradoxically, to show how first person is limited, I had to step outside of it.)

Also, I think a big contradiction of adolescence is that you are thinking about yourself and your sense of identity constantly, everything is “I, I, I,” but truly your identity is so unformed and incoherent. So I was thinking about how I could write in first person but minimize the “I” (the pronoun). At one point I actually tried to take out all the “I”s while keeping in the “me,” “mine,” etc. to give the sense that the world was happening to Julie, more than the other way around. That constraint ultimately wasn’t sustainable for the whole novel, but I think it still ended up informing the sentences.

Oh, hearing that explains a lot about the way first person works in this book. It’s almost a shadow—I that emerges, something inchoate—yet there is a lot of precision in description and perception at the same time. Thinking more about adolescence: Dryland is set in high school but it’d be a stretch to think of it as a YA novel. What’s the difference for you between writing adolescence for a YA readership, versus for an adult readership?

This is a question I’ve been thinking a lot about, because there are some reviewers who are classifying it as YA, and Tin House is marketing the book as YA crossover. But I definitely wrote the book with an adult audience in mind. And I really don’t read contemporary YA, so what I’m about to say is mostly speculation: I think that a primary aim of much YA is to get the reader to identify with the protagonist. And that really wasn’t what I was going for—as you’ve noted, I’m interested in distancing, troubling that sense of easy identification. I want the reader to observe Julie more than inhabit her. And I hope that the stylized language helps point to the fact that my intention wasn’t just straight-up realism—that I wanted to be commenting on these experiences more than simply representing them. There’s also the fact that I am trying, to some extent, to valorize failure, or at least examine its liberatory possibilities—and I’m not sure if there are YA books out there that do that.

I really enjoyed all of the music references in the novel—REM, My Bloody Valentine, among others—and I know you have a background as a musician. How has that background informed your writing?

When I first started thinking about what this book might be, there were versions of the protagonist where she was already into punk and indie music, various subcultures. But I decided that it would be more interesting to write about a character at the moment before she got into all that stuff—when those other worlds weren’t yet available to her. But I like to think that being a musician has informed my writing in other ways. It’s definitely helped me to think about form/structure.I’ve noticed that I really dig songs I call “all hook no chorus,” i.e. songs that are super catchy but aren’t conventionally structured. Or pop songs that also have some noise thrown in. It’s similar to how I’m attracted, as a reader and as a writer, to narrative, sometimes to plot, but with some ruptures, stutters along the way—or maybe a narrative that keeps moving but never quite arrives.

Last question! What were you like as a sophomore in high school?

Oh man! I had just discovered the artsy/theater crowd at my high school, and realized that those could be my people, rather than continually trying to hang around the fringes of the popular kids. I had this crew of friends in my class, tight enough that throughout the rest of high school we were known as the Sophomore Girls. For the first time I had somewhat of a social life, nothing major or illicit, hanging out watching movies and going to parks late at night. Maybe somebody smoked a clove. We watched 120 Minutes but were also a little bit hippie. It was really amazing, I felt this sense of belonging I’d never felt before. Then the next summer I went away to this summer program in Vermont and discovered punk rock, zines, and gay people, and subsequently decided I was over my friends at home, and spent the next two years waiting to get the hell outta there. Oops.

'I’m Open to Anything' by William E. Jones
'Kiss Me Again, Paris,' or: How Many Drafts Does it Take to Change a Light Bulb?
'The Terrible: A Storyteller’s Memoir' by Yrsa Daley-Ward

M./Maybe Henry Milks is the author of Kill Marguerite and Other Stories and three chapbooks, most recently The Feels.