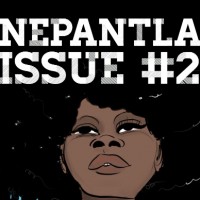 Nepantla Issue #2 will launch on September 17, 2015  on the Lambda Literary website.

In the following interview Alok Vaid-Menon and CeCe McDonald discuss the prison industrial complex, trans visibility, and queer liberation. Alok Vaid-Menon is a poet/activist who performs in the poetry duo Dark Matter and works at the Audre Lorde Project in Manhattan. CeCe McDonald is a nationally renowned activist and advocate who has brought much attention to the lives of trans women of color, specifically those within detention facilities. Cece was unjustly incarcerated in 2012 for defending herself against a transphobic attack.

This interview was conducted for Nepantla: A Journal Dedicated to Queer Poets of Color which will launch on September 17, 2015 (on the Lambda Literary website).

Hi CeCe! It’s been a few months since we were last together. How have you been? What’s on your mind?

I haven’t been up to much. I’m still dealing with a lot of struggles around employment and stuff like that. I’ll be starting speaking engagements again soon. I’m still working on the documentary and planning out going back to school soon.

I remember back in February we were together right after the one year anniversary of being liberated from prison. I was struck by hearing you talk about how you still didn’t feel free. Do you still feel this way? What does freedom mean to you? 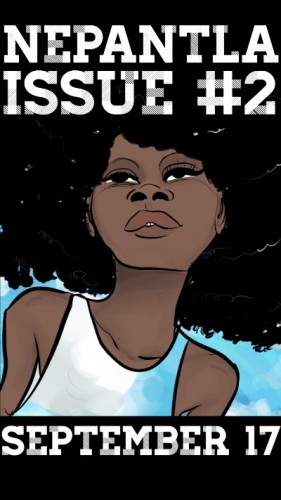 When I got out of prison I was overwhelmed by the support I received. Being in this environment – where people know your name – things become normalized. You just try to figure out how to fit in. But even when everything was going on with speaking engagements and having my situation in pictures on the media and things like that – People did not understand the struggles that I was still going through post-prison.

I was still on parole. Fortunately I had a parole officer that wasn’t that bad. They were understanding. I didn’t have to deal with a lot of micro aggressions and surveillance that others do: with people popping up and wandering around and making it harder for me for to be out in the world. For a lot of people coming out of prison that is one of their biggest challenges — one of the biggest causes of recidivism is parole officers that make it hard for ex-prisoners to survive and thrive in a post-prison environment. 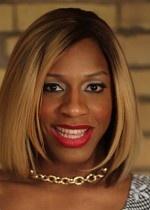 For me not to have to deal with that was good. I was already dealing with a lot: not having stable living situations, not having employment, having no one wanting to rent to me because they didn’t trust where my money was coming from. I don’t want to assume that it was because of me being Black or trans–but I know it was. Having a Black trans woman come to you and asking you if she could use your apartment: “We need to know who you’re working for, who you’re working with, how you’re getting this money?” For a lot of other people it wouldn’t have been that complicated to find a place like that to live. It caused me to be in a position where I was spending more money than I should have. I had to live in a hotel. Without stability I was put in a temporary place where I was just constantly worried and dealing with depression and instability in general–which is a condition of trans women of color growing up. Not really having much.

People think that when you are out of prison that you are free. That’s not the case. You’re constantly going to be dealing with some form of oppression that is pushed on you on a different scale than it is a person that doesn’t have any type of criminal background. You know I was out and I was enjoying doing the speaking engagement and that was like my job at the time. But I didn’t have any type of employment to fall back out when schools went out for the holidays and for the seasons. I wasn’t making any money and I still had bills to pay — I had to maintain living and not being able to get by. Just being a trans woman and knowing that it’s going to be harder for me to find a job. I have endure things like going through temp services and trying to get a job through them — a lot of time they have jobs who people who are getting out of prison can do because they don’t do background checks — like warehouse jobs and things that are more minimal.

How do you navigate this dissonance: On the one hand being celebrated on stages across the country and yet still having to deal with these daily issues? 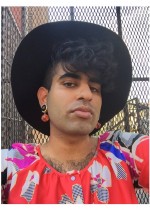 I don’t want to be a celebrity, I just want to speak about my situation. I don’t want people to think that I’m a celebrity from me going to prison, but moreso from the activism and the work that I’m doing. But the truth is I am still struggling — I still deal with the struggles of being a trans woman of color in America, which is every intersection of oppression. Being a Black person with a criminal record and all of the intersections that’s attached to that. From the racism to the sexism to the anti-trans to the neoliberalism. Sometimes I feel like I don’t want to even take up these spaces unless it’s for me to actually do work. I don’t want to do work with anybody who doesn’t have any understanding or empathy for me and my sisters.

I’m definitely enthused and passionate about being an activist and doing the work that I’m doing. I tried to get more people on board with being an activist and taking up space. What we are fighting for — especially those of us who are fighting for on all fronts — is that we put in so much and get little acknowledgement. From the queer women who started Black Lives Matter and how so many of these movement leaders have gotten shit from other people who want to attack people who have a vision that is different from theirs. People don’t want to take time to reflect on their own point of view.

I’m very, very political. Activism is my first thing I want to do. But where are you really going to find a job when you’re radical as fuck and want to get funded? But you don’t find jobs like that because even with a lot of non-profits they have an order they have to follow and sometimes I don’t want to follow. It’s a catch 22: you need employment and money to live and sustain yourself and survive. But I feel like when you’re transitioning you have to worry how you’re going to pay for that shit. I need my meds. People don’t understand us and how we go through withdrawals and stuff like that. When I’m speaking about the revolution or some radical, political, anti-colonialism, anti-racist, you know — I’m enthused about that. But it’s hard to support my life. There aren’t spaces where people can be themselves without worrying that they have to make money.

So in the past few years we’ve seen a lot more visibility of transgender issues in the media. I know that you always keep it real so: What is this visibility doing?

I feel like a lot of times what people see in the media they expect to happen in real life. That’s the subliminal brainwashing of the media in general. You look at pop culture and society and how people pick up things and what they think is cool and what they think is not cool. It’s really important to understand that’s a view to a very surface world with very surface topics — there’s nothing really in-depth that you get from the media really because a lot of times people aren’t experiencing the real lives of other people. People no longer take their time to actually explore and get to know people and talk to people. We need visibility that’s about breaking cycles — but people aren’t trying to break those cycles. They internalize the information that has been taught to them for millennia. For example: the whole gay and lesbian movement was started by and led by trans women of color? The media won’t teach you that.

Along with this increased visibility of trans issues we have seen a spike in reports of violence against Black and Latina trans women. What do you think is happening?

I feel like when I follow the news I just get really depressed. There aren’t numbers, they are lives!. 25 trans women have been killed in the past 2 years. I think we are hearing more about them now because there has been more media visibility of trans women there have been more talk about trans women. We have to talk about how this has been going on forever. Think about all of the trans women before these past few years who were misgendered? Who were never identified? Who were never found? No one has seen Sage Smith from Charlottesville, Virginia. I went down there in October of last year and I’ve been knowing about her case since I’ve been locked up. I’ve wrote about her in some of my blog posts. It was just really hard to see that no one really give a shit about this girl. There are two big cases that happened out of Charlottesvile where two white women went missing and the police were all over the case and had search squads. They didn’t even put in the effort to look for Sage. We don’t know the real numbers. 25 murdered is one too many.

What would a liberated society look like for you? What are you fighting for?

There would be no police because people are willing to take accountability for their own actions and figure out ways of dealing with situations that don’t instantly go to violence. I’m talking about: How do we prevent situations from becoming violent? We won’t have the police state — this militarized police state — and the cops being able to have jurisdiction on our lives. We would have community building. Trans women are free to live in their skin and not feel like they have to deal with transmisogyny. Life would be so simple. People wouldn’t have to worry about moving or missing a meal or if they’re going to have to do this or that. We will have everything that we need. Everyone will love each other and we will smoke lots of weed.

How can people support you today?

People can go to the Free CeCe documentary and make donations to the post-production of the movement. I really feel like this movie needs to be out in this world. People can also book me to come and speak through my manager (abbydeasley@gmail.com). People can PayPal and contact me at honeebea88@gmail.com so that I can continue to do my work to abolish the prison industrial complex. People can follow my new website: www.cecemcdonald.com You can also hit me up on Facebook where my name is “Chrishaun Reed Mai’luv McDonald.”

Michael Lowenthal: Be My Little Baby
Chris Kraus: Summer of Hate
Literature at the End of the World