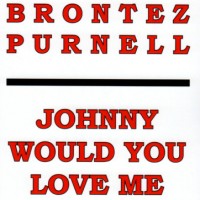 Brontez Purnell isn’t one for withholding. On the first page of Johnny Would you Love… (Me If My Dick Were Bigger), the queer renaissance man of the Bay Area, establishes that he is punk as funk, puts the work in working class, and has no time for the sad navel-gazing of second wave faggotry currently in vogue: “…after years of repeated listening I finally allow myself to say it in my head: I fucking hate The Smiths.”

But this does not mean Purnell is all hard edges. He is an open-hearted romantic whose desires for love, cock, and community give him–and the book–life. In a series of essays, notes, vignettes, choreographies, and an accumulation of writing prompts Purnell has produced a 126-page illustrative text of how loving freedom for yourself and those around you demands disruption, discomfort, and a lot of movement. Quoting a dance teacher he studied under, Purnell provides something of a possible mantra early in the book: “I don’t care how flexible you are or how well you can dance. I just want to see you move.”

And move he does. One moment as a reader one can be rushing through a story about sex and poop or Solange trying to distance herself from him after he throws a white girl’s phone across the club, the next one may be catching one’s breath reflecting on an unexpectedly beautiful line. A personal favorite: “…if there really is a Hell all us gay boys are going for how carelessly we treat each other.”

The breakneck pacing of the book can be seen as political, a reminder that there is no rest for those struggling to survive and create. Purnell has a lot he wants to share and along with that an eye for experiences that speak to larger truths. In a short piece about absorbing other people’s less than complimentary comments about his body after he appeared nude on the cover of a Bay Area paper, he shares that he dealt with it by getting high and going to Whole Foods. The micro view of this story is living on the Left Coast, even a self-described “ride or die bitch” like Brontez needs a kombucha once in awhile; the macro takeaway being: the where, when, and body we live in shapes how live. We can’t escape our context.

I would one day look back to see what basically was going on was two boys, misfits of sorts, accessing masculinity through sex because raw sex was “how men do it,” alongside the fact that it felt good. I gave in to his demands ‘cause the thought of him not loving me or not wanting to have sex with me was scarier than any disease.

This passage shook me out of the book and into a moment a few years ago when I was facilitating a conversation among young people living with HIV and others deemed most at risk. A young South Asian man who had been living with HIV for a few years recalled a feeling he used to want for himself, but able to articulate it only after some life experience: “I wanted to be vulnerable enough to get HIV.” It was the most silent of epic mic drops. In an era of prevention at all costs, the young man’s words were brazen and revelatory. It was a hovering thought I never had the boldness to let fully form. Feeling responsible for the table, I worried about how to proceed, but I needn’t, those around it hummed and nodded in agreement. As people who have queer sex, queer love, and even according to some, queer bodies; being vulnerable was an achievement of the highest order against the tyranny of rejection. To invite in even the idea of HIV–one of the boogiest of all boogiemen–was a blow to the shackles of oppression.

This sense of the looming virus is something Purnell address in the book at the same moment he discloses. In a passage about bathhouses he writes,“[…] It was before I was positive and I felt like I was going to have to fight like hell to maintain my negative status ‘cause either I liked fun too much or had a death wish (it was hard to discern)…” He provides the story of AIDS he inherited (that it’s something inevitable that we invite into our lives through bad behavior) while doing the work too few others are doing: telling personal, embodied stories of AIDS now.

There are many good bloggers and essayists writing about HIV for the web, academic journals, and other platforms but most often they are written by people like me–well meaning HIV negative folks. As an HIV+, black, queer, creative, cis-man with hips and ass he loves to have loved, Purnell working out his relationship with the virus and the collateral experiences it brings, on the page, is of vital importance.

And as is his style, vitally messy.

An essay entitled “The Politics of Bug Chasing” begins, “I joined the online barebacking site ‘cause I was out of ideas. The guy came over; he was on a 5 day speed binge. He looked me in the eyes and told me he was worried about me.” It ends, “But the ultimate question is, who’s more wrong?” In between is a summary of sorts of what occurs between Purnell and his new friend debating the reasons people find themselves living with HIV. It is an essay not for the faint of heart—nor the dogmatic. He is not writing to advance a theory an idea or even a defined point of view, although he delivers all three. He is writing to communicate, to share, to live.

As someone invested in the ongoing response to AIDS, it is important I do not get stuck on the appearance of HIV in Purnell’s prose, but rather see his relationship to the virus as just one of many examples of Brontez’s power of uncanny self-reflection. Purnell lives always at risk of being seen as being “too much” by others while unapologetically being open to grace. Purnell’s way of being in the world shouldn’t be noteworthy, but in the face of normcore, trigger warnings, and call out culture, it is.

A subtle beating heart at the center of many “women’s movies” over the last few years, be them blockbuster’s like Bridesmaids or art-house darlings like Francis Ha, is the questions of what do you do when your friends go straight? We see lovable outsider women–be they former dancers, or cupcake entrepreneurs–learning to transition from early adulthood ensconced in lovingly codependent pixie existences, to learning how to be slightly older women charting their own path, often having to adjust their expectations of life as they go. Along the way questions of friendships’ elasticity come up, how much can those who know us absorb our peculiarities until they abandon us.

In his book, Purnell is serving us a similar ‘women’s’ story but with no Hollywood writers, casting agents, or even a satisfying ending. By asking, “Would you love me if….?” Purnell is not inquiring about the limits of love, he announcing his awareness that limits exist and snubbing his nose accordingly. He refuses to go straight, adjust his expectations, or refrain from being too much. Along the way, he has carved out a creative and hopefully satisfying life full of dance, writing, friendship, sex, adventure, and as it seems, love.

Thank God he has been keeping notes.

Johnny Would You Love Me ….(If My Dick Were Bigger)
By Brontez Purnell
Rudos and Rubes Publishing
Paperback, 126 pp.
August 2015