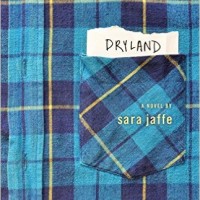 It’s 1992, the year Nirvana’s “Nevermind” came out and put the Pacific Northwest on the map. Dryland takes place in Portland, Oregon; which mirrored Seattle by sharing industrialism, rainy days and the reputation of hipness spawned by the grunge music scene. Fifteen-year-old Julie lives with her family in the white, suburban west hills of Portland. She goes to school in her older brother Jordan’s shadow. He was a star swimmer in high school and an Olympic hopeful that never made it, who now lives in Germany, estranged from his family.

Julie is best friends with Erica. Both girls get invited to join the swim team by Alexis, an older, more popular girl. Julie is both enticed and repelled by participating in swimming, the sport that was her brother’s legacy. Julie and Erica’s shared interests unravel; Erica would rather boy-watch and party, Julie is more introverted and thoughtful. Some of the most insightful writing in the book describes what happens, and how it feels, when two best-friends-forever drift apart, to become two used-to-be best friends.

Julie meets Ben, a swimmer buddy of Jordan’s, who now works as a landscaper. Meeting him at his apartment means venturing into SE Portland, a more urban, less protective part of town. She interrogates Ben about her brother, and learns that Jordan’s estrangement is due to his sexual identity–he’s gay and may have HIV/AIDS (still regarded as a death sentence in the early nineties). This revelation parallels Julie’s discoveries about her own sexual identity as she and Alexis gain a closeness that becomes more than friends.

Dryland was conceived as literary fiction before it was published as a crossover YA novel. “I wrote the book with an adult audience in mind,” Jaffe says in a Publishers Weekly article. One of the benefits of this is that Jaffe’s Julie lacks the clichéd bitchiness so many female characters of YA novels and films suffer from. Even as their friendship falls apart, and Erica makes choice that hurt Julie, Julie still tries to save the friendship, reaches out to Erica, even puts Erica before herself to try and save the relationship. Julie’s depth of caring will connect this book to young readers, and credits female teens with empathy in a unique way. Jaffe also captures wonderfully the many nuances of high school: dull yearbook meetings, peer pressure, jock stupidity and competition, and the love and cruelty of high school girls.

One thing missing from this book was ironically something that’s almost a cliché in YA “problem novels.” Despite having a gay brother, despite her own realization of her attraction to women, Julie never asks herself (or, as a teen in a very straight environment, panics about) “Am I gay?”  Yes it sounds trite, in an after-school-special kind of way, but it’s also a primal question asked by straight and queer kids alike at the heart of their search for self-identity–and–sadly, a question often forced to consideration by bullying and peer pressure. It seemed unrealistic that Julie would never point blank ask herself this –today, but especially in the past, when this story takes place. All the more so because in 1992, Oregon had homophobic Ballot Measure 9 in front of voters, adding both local and national attention to the ramifications of being gay.

In spite of this, adults and teen readers will appreciate this coming-of-age tale which captures a girl’s initial steps to finding her sexual identity and the emotional struggles of navigating adolescence.