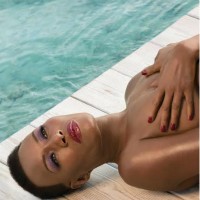 I can still recall the feeling.

From disco chanteuse to New Wave interpreter, Hollywood actress to talk show spitfire; Grace Jones made her mark through this kind of primordial energy. It wasn’t so much what she said (the Bond movie is pretty terrible) but her manic method of delivery. Each word immolated on her tongue as if she, this new subversive culture figure, was single handedly overturning the mainstream through its very own nomenclature, on its stages and screens.

My ardor grew with me into college. But this was a tough time to love Grace. She had a near twenty-year fallow period where most news wasn’t good news: the slapping of train conductors or no-shows at European festivals collected a necklace of hearsay and paparazzi snaps of the artist, whose heyday may, perhaps, have laid behind her. But I held out.

Then came her tenth studio album Hurricane and subsequent tour, I clasped the concert ticket tight in my palm, incredulously anticipating the assuredly late IRL arrival of this tumultuous icon that seemed more unreal to me than any work of fiction. And while her performance did not disappoint, a pleasant surprise arrived in the form of the garrulous banter to which Grace indulged her audience whilst being fitted backstage into the next in a series of show-stopping Philip Treacy hats. Ms. Jones is a pithy conversationalist, adept at humoring her audience without softening the blows she delivers in song.

This is the core and knowing charm of I’ll Never Write My Memoirs. While the imagery that cemented her reputation is all alluring, iconic and impenetrable, the voice at the heart of this tome (written with Peter Morley) is generous and in on every step of that image production. Not content to be a muse, Jones is a fiercely forward-thinking raconteur; chapter after chapter recounts an artist wrestling with some future trend in fashion, sound, and style in an attempt to maintain creative control of her constant evolution. The distinction between performance and performer becomes “a tightrope,” the overriding theme–and challenge–throughout.

These pages mark a dramatic shift for an artist whose past has been written mostly through album covers and celebrity gossip. Borrowing its title from “Art Groupie,” a self-penned track from her 1982 breakthrough album Nightclubbing, Jones expands, “I decided then that the only way I would be known from then on was through my music, through pictures, and through art as an art groupie. They would be the only footprints, the only clues to where I’ve been and what I was thinking… The rest is mystery.” But along came the Internet, and the secrets, “which are important to me” went spiraling so out of control that Jones decided to set the record straight. “Much of my life has been played out in public, full frontal, no holds barred but there are still plenty of secrets to reveal. I’m in the mood. This doesn’t mean I’ll spoil the mystery… I will try anything once.” 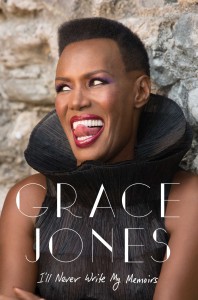 It’s actually pleasantly disarming how conventional I’ll Never Write My Memoirs is, given the hubristic nature of her persona. That bombast is there, but it’s flirty, expressive and informative. Jones elaborates upon each phase of her storied life (hippie nudist, Parisian fashion muse, Studio 54 siren, Warhol darling, Jamaican punk pop vamp, an actual Vamp) without the thirst of a trashy tell-all. This is a casual memoir about a life of artistic integrity, stubborn originality, and, yeah, a lot of partying.

It’s a tribute to that voice that the opening chapters (literally, “I was born.”) are as amusing as those of the artist at her peak–a Pentecostal upbringing by an abusive step-father in Spanish Town, Jamaica gives way to thespian pursuits in Philadelphia, which include employ as a Playboy Bunny, doing acid with Timothy Leary and one flirtation with heroin. “I’ll try anything once,” is a constant throughout these 400 pages. “You have to have a life in order to write a memoir,” Gary Indiana recently espoused on the subject. Well, “Bev” Jones worked overtime.

Soon she’s modeling in Paris and rooming with Jerry Hall and Jessica Lange. Her drive finds its outlet. Recounting her musical debut as a disco queen, a phase often overlooked for her 1980s avant-gardia, Jones paints herself a savvy sampler of nightlife culture, hip to sonic trends and producers, but also to the sexual currency of what was then a gay underground scene. She knew what she liked, what she wanted and she wasn’t about to record “Boogie Wonderland” to make an easy buck. “Other things are more important to me than simply having a hit, because then you have to live with it–it becomes who you are.” Fashion shoots with Helmut Newton and Antonio Lopez, outré runways with Kenzo and Issey Miyake build to the pinnacle of Studio 54.

But it’s not all art–Jones certainly earns her keep in fabulous asides that cement her reputation as a first class diva. She takes off-handed credit for the writing of Chic’s hit “Le Freak” because she forgot to list them one New Year’s Eve at 54 and the bouncer told them to “Fuck Off,” lending the song’s alleged, original chorus. Slave To The Rhythm sessions were stalled because, “[Trevor Horn] called just when I was setting fire to [Dolph Lundgren’s] trousers.” In fact, an entire chapter, “Delay” is devoted to her famed tardiness, “You can’t be late for the Concorde. (Well, actually you could be–I once arrived just as the plane was about to take off and they stopped the flight and came and got me).” Grace aims to please, but beyond bragging rights, these pages grant access to an astute personality who knows the demands–and limits–of life-as-art.

Clarity arrives when she sheds her disco baggage, learns to love the raw vitality of her rugged homeland, and finds two life-long collaborators in Island Records’ Chris Blackwell and famed paramour, artist Jean-Paul Goude. The lasting image of Jones arrives courtesy of this latter union. Arm outstretched on the cover of Island Life, face cut up in a ferocious roar on Slave to the Rhythm. This new phase provided Jones with new exhilarating forms of artistic expression:

[A] new context for me to inhabit…It was like the invention of a new genre, related to the musical, to opera, to circus, to cinema, to documentary, to the art gallery… I wanted to use my body to express how I had liberated myself from my background, ignored obstacles, and created something original, based on my own desires, fears and appetites. I was using my body as a language.

I’ll Never Write My Memoirs is vague when it comes to time. Grace isn’t too concerned with that. Twenty years out of the limelight is more or less explained away with corporate parties, “You can live well on five or six events a year,” and a rather indulgent, late chapter concerning her flings “Combinations”. But chronology is missing the point, which for Jones has always been the now. Her passion is palpable when lost in the throes on stage, “craving the next,” collaborating with the greats, taking no prisoners and making no compromises. These accounts spring from the page as defiantly headstrong and alarmingly sober (even when the circumstances are not). Forgoing self for the image, the performance, the sound; it’s startling that there’s any space for the Grace behind the mask. But she’s in here: wily, assured, intimate and wise. Even (or especially) when blasting the newer crop of performers, in an excerpt that has already, in her own way, broken the internet; she “[mourns] a loss of subversive power and deeper meaning,” citing, in metaphor, a pretty good example of Rihanna’s homage to her famed Keith Haring look: “where he painted directly on my body, she wears a painted bodysuit. That’s the difference. Mine is on skin; she puts a barrier between the paint and her skin.”

“The past should not stay fixed, but should itself move with the times,” she warns and she got it right. This memoir fleshes out an alert and embodied performance, a life lived on the edge. It’s great to finally find the insight to her intentions. Her tale finally told, tall as ever, and with total integrity in tact. It’s a feat, actually that the intrigue and mystique is still in tact, allusive and mysterious as ever–enriched, even, by a writer who knows just what details to divulge and what gossip to elide. She totally gets it–it’s all in the afterward.

Ultimately, I’ll Never Write My Memoirs is something of a feminist text. Though her politics might at times rub as iffy, when “she’s lost control,” Jones is the active agent in that ride. She wrote her own path. It’s clear in these pages. And even when she drops off the map in the face of a huge commercial recording contract, she owns this choice, rather than sacrifice the integrity of her project. It’s fabulous to have her back, trending with the rest of them, hula-hooping topless at an age that may or may not be 67; capturing the same hushed awe that I found in her image decades ago for a new generation. Perhaps a more telling title comes from the words penned for her by friend Marianne Faithful from the same 1982 album, “And I’ve done it again, done it again, done it again.”