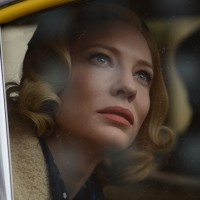 Queer icon Grace Jones is heating it up with her memoir, out Sept. 29th, which reportedly throws shade toward some of the biggest divas today, such as Miley Cyrus and Lady Gaga.

The new trailer for Todd Hayes’ Carol has arrived which promises all of the melodrama and aesthetic delight that befits a 1950’s lesbian romance. Based on the novel The Price of Salt by Patricia Highsmith, there are already whispers of Oscar-worthy performances.

The OFFICIAL INTERNATIONAL TRAILER for Todd Haynes’ CAROL is here and it is heart-stopping gorgeous! #SWOON #cateblanchett #rooneymara

Bruce Benderson writes for OUT about how a breakup can force you to take a good hard look at your life.

I was sitting in my spacious East Village apartment when I faced that issue, among mostly midcentury furnishings and original art by friends. I gazed at the several books I’d published that had all finally found their way to the remainder table. My eye strayed to the oversize flat screen and my hard-drive collections of over 2,000 films. I studied the walls cleverly painted in an array of Technicolor hues inspired by my favorite films.

No, I did not want to die here.

We mourn the loss of John Perreault, art critic at The Village Voice and the SoHo Weekly News, who passed away after 78 amazing years.

Mr. Perreault’s reviews were required reading for anyone trying to make sense of the swirling, often confusing, art scene of the 1970s, when movements and trends vied for attention.

For those who are still nostalgic about 1970’s New York City, Edmund White reminds us exactly what those days looked like, in all their glory and grime.

Michael Nava is enjoying the spotlight this week for his mystery series which explores the aftermath of AIDS.

The New Yorker published a fascinating article about Dennis Cooper’s use of GIFs as a storytelling medium. Now the question for Dennis Copper is: GIF with a hard or soft G?