‘The Small Backs of Children’ by Lidia Yuknavitch

‘The Small Backs of Children’ by Lidia Yuknavitch 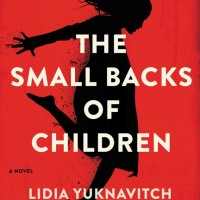 The Small Backs of Children is a meditation on the devastations of war and the functions of art. The plot centers on an orphaned child from a war torn Eastern European country, and how her life captivates and unsettles a group of western artists. The story is delivered through oscillating voices of a cast of the largely nameless artists, dubbed the photographer, the writer, the playwright, the poet and the filmmaker. The narrative is sparked when the photographer, an American, snaps a provocative wartime photo of the orphan (first known as the girl, later named Menas). This photo haunts the writer, who is both disturbed and intrigued by her photographer’s friend’s image of the girl. The orphan is hazardously brought to America to live with the various artists, where she paints and comes of age. The relocation is partly for the sake of the girl and partly for the ailing writer, who, we’re told in her first-person introduction, once lost a daughter of her own.

What is astounding about Lidia Yuknavitch’s writing is that it consistently engenders a deeply felt visceral experience. When the girl is leaving her native Eastern Europe with The Poet (who came for her), the two men who are charged with ensuring their safe departure turn against them. What follows is reminiscent of scenes from Quentin Tarantino’s Kill Bill—a violent performance of female vengeance that is eerily satisfying. Here, after the girl has killed one of the men, she and the poet escape: “And the quivering in the poet’s hands when she lifts the little airplane drink up to her face again and again. And the tiny lines near her eyes that have written themselves this day. And the marks on the poet’s body that the girl knows hide violence like a skin song beneath her clothes.” Yuknavitch has a particular talent for writing these kinds of moments; with a poet’s economy of language, she creates images that reverberate.

Among the book’s many attractions is its consistent challenge to American identity: Here, the photographer thinks: “Even knowing there was no category for her love, or might never be back home in America, land of coupling, land of sanctioned marriage and two-person twined knots, land of tireless good-citizen living, land of the happy family, land of the free and the brave and the locked imagination, land of ignorant homeowner masses lined up in twos.”

While the novel’s lyricism and cultural insight soar, there are moments, both small and large, when Yuknavitch’s aesthetic choices seem to have more to do with cultivating a grandiose and idiosyncratic voice than they do with creating a furtive literary whole. In one section of the novel, “The Writer” troubles the boundaries of fiction:

All our artistic origins have been atomized […]. What is the story of a self? What is chronology? The history of a life? Which story should I tell to make a narrator, an American woman writer at forty-five—which plot, which pathos? Because any writer’s life knots are embedded in whatever story they tell. I have invented hundreds of selves. Men and women. I have peopled the entire corpus of my experience with fictions. Who is to say they are not I? I them?

I admire that the book enacts and performs the feminine, as muse, as rescuer, as artist. The above illustrates the novel’s serious underpinnings and recurring self-investigation into the power of narrative. Yet, too often, there is an overt and consistent self-consciousness to the text that undermines the solidity of the book. At times, the prose feels unformed and unfinished. Neither the tone nor the forms allow a reader to fully participate in the plot, nor in the characters as fully formed people. We are always begged back from entering the work; the book’s form goes from small chapters, to a script-like dialogue, to short bursts of heightened violence, to five fractured endings for the book, which allow each reader to choose which ending (s)he prefers.

As a deeply moving piece of public thinking, however, the book does succeed. The exploration of the specific violence done to female children in war, and Menas’ observation that “there is no war […] there is only the occupation […]. What has happened to us—there is no story” is a welcome reminder of what America’s occupations of Iraq and Afghanistan have meant for so many children and families out of our sight. We need to hear women writers at full voice, and there are certainly moments where the specificity of the voice at work in this book—in particular her iteration and invention, even in her chapter titles (“Bloodsong,” “Nightmaking,””suggests Helene Cixous’ work)— held my attention completely.

Menas characterizes herself as “a piece of something looking for form,” and the same can be said of this book—which is an intensely felt, beautiful piece of clay, looking for form. I’m thrilled that Harper signed Yuknavitch, and I’m excited that people are paying this sort of attention to a writer who speaks explicitly about the traumas of war and how some survive by putting a shunt in their culture.

Michelle Visage's 'The Diva Rules' Serves Up Advice From a Queerly Tinted Career
'Missed Her' by Ivan E. Coyote
'Voguing and the House Ballroom Scene of New York City 1989-1992' by Chantal Regnault

Stephanie Glazier’s poems appear or are forthcoming in the Iraq Literary Review, Alaska Quarterly Review, YEW, and others. She has been a Lambda Fellow in poetry and is host of Public Poetry Announcements, a poetry segment on WKAR in Lansing, Michigan. She holds an MFA from Antioch University LA and lives in Portland, Oregon.