‘The One That Got Away’ by Carol Rosenfeld

‘The One That Got Away’ by Carol Rosenfeld 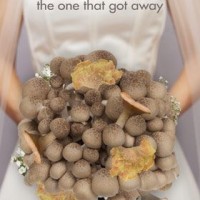 In The One That Got Away, Carol Rosenfeld’s debut novel, wedding planning—the stuff of cotton candy-spun dreams—serves as the backdrop for the romantic longings of Bambi Devine—B.D. to her friends—who earns her living in the industry.

B.D. has recently come out, although, as is often the case, she is the last of her friends to know. No matter. She now knows, and throughout this up-close-and-personal first-person novel, she explores life options and lesbian lingerie from her middle-aged dyke vantage. She has an eye for detail, which she uses to help would-be brides and grooms select place settings and silver for their special day, and to buy scarves and accessories for her special nights.

Eduardo, her Argentine drag queen boss, adds pizzazz to arrangements and cuts a dashing figure. “He clothed his flapper’s body entirely in black, flowing through the world like ink from a calligrapher’s pen,” B.D. tells us, revealing her penchant for romantic whimsy.

Indeed, as the story begins, Eduardo judiciously suggests to a conjoined potato head of a straight couple that they probably should be Catholic if they want to make use of St. Patrick’s Cathedral for their wedding—and that the New York Philharmonic Orchestra might be too busy to be the house band. He cannot do the undoable, but still, he is something of a fixer, the Olivia Pope of wedding planners.

B.D.’s ironic, self-deprecating style presents the perfect foil to the celebrated one day of glitz and triumph that is a wedding, and to brides who are sucking in tummies to fit into their gowns. Her perfect breakfast is served not on a silver tray in the honeymoon suite but on a cardboard Dunkin’ Donuts takeout container as she makes her way to work. Although as things heat up in the book—and as she takes on a private detective lover (Angel, presumably named after the investigator in Rockford Files)—breakfast is prettied up and served over hot sheets.

As the title The One That Got Away suggests, there is longing aplenty in B.D.’s life. Though she scores Angel Merse, a suitable bed- and fun-mate, her heart is set on Bridget McKnight, a sweet woman who’s already in a relationship, and who tells B.D. in word and deed that she wants to be just friends—something B.D. doesn’t quite accept. Why? Because that’s not our narrator’s path—to accept. Even in sex, she thinks, assesses and is satisfied according to the letter of the laws of orgasm, but not always according to the pleasures of abandonment.

A notable, usable and loving aspect of this romp is that it reads as something of a how-to for newly hatched dykes: how to buy toys, how to attend meet-ups of professional lesbians, how to learn to be yourself. The droll narration makes Rosenfeld not a Martha Stewart of dyke how-tos but rather a Lily Tomlin—though come to think of it, either woman works for me. In a romantic tryst with a tourist from London—before she meets Angel—B.D. almost hovers above her body to describe the deed. It’s comical and relatable:

The sounds I heard seemed separate from me, although I knew I was the source of them. I thought about women in books who could come at a touch, a breath, a look, a word. Why was I always the tortoise and never the hare? But the tortoise won the race, eventually, so maybe that wasn’t a good metaphor. And what happened to the hare that made him the loser? I was thinking too much. I wondered how much time had or hadn’t passed and if Jean was bored or would like to give her fingers a rest.

B.D. is detailed in everything she describes: food (lots of food), clothing, New York. Her descriptions of people also don’t disappoint. The first time she is alone in the bedroom with Angel, she is like a teenager:

I was having trouble with coherence, with remaining upright when my hormones were demanding that I lie down. With her Fra Angelico blue eyes and curly, new-penny red-blonde hair that was guaranteed to drive the most congenial cherub into unheavenly envy, Angel Merse was absolutely adorable, certifiably hot.

Passion strikes, but not without B.D.’s generally human and specifically womanly regrets about her body: “[Angel] was also petite. I felt huge. I had torpedoes for breasts and thighs the diameter of redwood trunks that were buckling like willows in the wind.” But then, tra-la, B.D.’s wit and zest come through. Referring to the imminent comical threat of her own (allegedly) big thighs, B.D. writes, “To save Angel’s life, I would have to be the bottom. Lucky for both of us, that’s the kind of girl I am.”

Her affection for or obsession with Bridget doesn’t waver until there is a sort of strange and unexpected turn of events at the novels’ end. I was neither entirely prepared for this twist nor convinced that it was sufficiently explained, but it took up so few pages that my overriding thought was: So what? Stuff happens.

This is a fun read, a romantic exploration and a gentle send-up of lesbian community that many women, lez, lez-leaning and even straight, will want to buy.

'Everywhere Home: A Life in Essays' by Fenton Johnson
'Slut Machine' by Shane Allison
The Other Side of Forestlands Lake is an Intriguing Genre Mashup