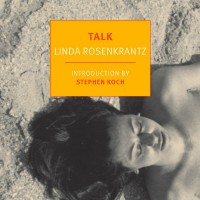 The source material for this novel, composed entirely of dialog tape-recorded by the author, is now fifty years old. In 1965, Vietnam was a topic of dinner conversation, but not yet one that might result in thrown cutlery. Warhol was influential but not overwhelming. Homosexuality was acknowledged in certain rarefied circles, telegraphed in code in all others. These conversations between three friends summering in East Hampton, cringing at the approach of thirtieth birthdays and the obligations of love and work, are both bound to their moment in time and delightfully free from it. Talk is a valuable historical document to be sure, but it’s also a dishy delight.

Our trio are artists. Vincent paints, and many of their conversations are art world party postmortems. While watching a fellow artist, Tim, at the beach, talk turns to fame while Emily, who acts, keeps redirecting the conversation back to her. Vincent snaps, “Let’s try not to talk about you for thirty seconds and see if we can survive.” She’s game, but only makes it for forty-five or so before demanding the spotlight again. Marsha is the writer coincidentally recording all this for posterity.

With so much cracking open culturally, it’s not shocking that Talk often turns to sex. Marsha and Vincent’s friendship is so intense they risk falling for one another. Vincent is gay, but no matter; their summer is infused with a sense that anything goes. In a chapter titled, “Emily and Marsha Play a Game,” the two bat pairs of names back and forth and must pick who they’d rather, well, you know:

MARSHA: Oh, I’d much rather make it with McGeorge Bundy, just to be able to whisper the name McGeorge.

No friendship is free from conflict, but even the more barbed exchanges contain hilarious gems. The chapter titled “A Difficult Dinner” is a lengthy argument with brief lulls as the courses change (these people are serious about their dinner parties). It’s repetitive and fatiguing, as such exchanges often are, until Emily’s cat wanders into view, setting Vincent off: “Look at Jonquil, she’s so elegant. She unnerves me. She’s so elegant. Are raisins fattening? Tell me the truth.”

Because Talk reads like a script with no stage direction, it’s not merely tempting to imagine that last line spoken by, say, Jack on Will & Grace, or to hear some of Marsha and Emily’s lines coming from Samantha, Carrie, Hannah, or Shoshana; it’s virtually impossible not to. In his introduction to this edition of the book, Stephen Koch even allows for comparison with the friends on Friends, and that’s apt as well. Some of the best TV shows offer a glimpse of a life we’d like to try on; the girls of Girls keep trying to live the dream of Sex and the City in an economy that refuses them at every turn (their persistent cluelessness in the face of this drives much of the humor). It’s such a pleasure to slip in among these three and their somewhat less complicated lives.

Oh, and a note about how all this was preserved. Remember, it’s 1965; Rosenkrantz didn’t fire up an app on her iPhone and have Dragon transcribe the whole thing. She recorded, on a virtual suitcase of a machine (lugging it to the beach, mind you), her entire summer. The initial transcript included twenty-five characters and ran to 1500 pages, single-spaced. The end result, Talk, is a slender novel narrowly focused on three friends slowly embracing adulthood as the nation prepares to lose much of its innocence. It’s blazingly witty, unexpectedly touching, and note-perfect.

Read an Excerpt from 'The Right Side of History: 100 Years or LGBTQI Activism': Miss Major Griffin-G...
'Kissing the Rain' by Larkin Rose
'Slingshot' by Cyrée Jarelle Johnson