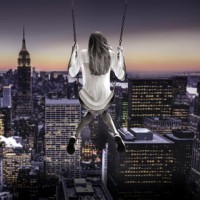 “Newborn stars / take millions of years to form, / billions of tons of mass to make. // But the constellation of a family / can shift shape / in seconds.”

Captivating you in the first few pages, visionary author Cordelia Jensen has put forth Skyscraping, a semi-autobiographical novel in verse for young readers. With this truly shaking view of New York City in the early 90s, we have the gritty edge of the HIV/AIDS crisis as an atmosphere working in contrast with the innocent voice of Mira, a high school student trying to make sense of her own life. Mira is at that tender age where you almost always feel like you’re teetering on the edge of something. With her editorial job at the yearbook, her boyfriend having graduated and gone, and her college applications almost always on her mind, it’s no wonder that the novel starts to explode when she tries to make sense of her parents’ open relationship.

Told in a poetic style that is both thoughtfully romantic and chillingly cruel, the author tells the story using a voice that is troubled, but not angst-ridden, sweet, but not cloying. In the same vein as Sonya Sone’s What My Mother Doesn’t Know, and One of Those Hideous Books Where the Mother Dies, a reader might be both delighted and alarmed by how seamlessly a girl’s life can be documented in a series of poems. Though the tone of the novel still feels “innocent” at times, the very seriousness of her family’s upheaval is addressed with care and careful emotion. This feat of style really shines when Mira is thrown into the thick of the plot. She discovers her father with his male lover, both of them completely naked together.

Mira is constantly dissecting the nature of human relationships, using language to talk about LGBTQ relationships that is both juvenile and complex. As her parents pull together for a “family meeting,” the conversations afterward move between what you’d expect and what you wouldn’t. At first, Mira’s reactions are a bit one-dimensional: somewhat demonizing her father, running away, lashing out, talking about the “shattering” of her family, and what she prior believed about her parents. Though some of these poems read a tad cliché, as is sometimes the case in YA, you will breeze through these more melodramatic sections because the book moves very quickly. We’ve all read a story where family ties are broken because of a new relationship, but Jensen’s one-of-a-kind writing shines brightest when she draws in an unexpected parallel.

A recurring motif in the book turned Mira to the imagery of stars and outer space. “If you get too close, / you might find / the actual brightness of something / can make you go blind.” A fact you’d read in an astrology textbook, lineated, suddenly feels profound and relevant. It is moments like this where Mira’s voice and Jensen’s talent truly feel special, making this book one that so many need if they’re going through the same thing. This style services the reader well when Jensen tackles the immensity of the AIDS epidemic, as her father falls victim to it and she must slowly try to pull her family back together in the wake of devastation.

If you’re thinking about picking up this book, your time commitment to it will be quite small. Another beauty of the atmosphere Jensen’s created is that it moves quickly, and when the book’s over you’ll feel a little heartbroken you can’t read more. Breezing through the pages, you’ll wonder how you went from a high school yearbook meeting, to a ghastly hospital scene, to an activist march powered by ACT-UP, to a driving lesson between Mira and her father’s lover. Though the book wraps up with a neat little bow, its honesty is its greatest strength. Anyone who has experienced the complications and turmoil of New York’s AIDS crisis in the 90s will be weeping by the end of this piece. More importantly, it’s those that are unfamiliar with this essential part of American history that will be affected most. Yet another beautiful addition to the conversation, Skyscraping is a book young adults need, addressing the idea of a “broken family” and suggesting that sometimes it is the “brokenness” that makes your family what it really is.